GDC 2019 is next month, and in preparation for the event, the official schedule has been made available on the GDC Conference website. Notably, one of the sessions on the calendar is supposed to cover a first look at a new SDK from Microsoft that will allow mobile game developers to integrate the Xbox Live service into their titles.

The Xbox Live service is already available in a few Android games such as Minecraft, but it's limited to titles from Microsoft Studios, so there aren't that many games on the Play Store that actually include the feature. The upcoming release of the newly announced SDK should change this situation, so here's a loose outline of what to expect from the scheduled announcement at GDC.

- Xbox Live players are highly engaged and active on Xbox and PC, but now they can take their gaming achievement history, their friends list, their clubs, and more with them to almost every screen.
- This will break down barriers for developers that want their communities to mingle more freely across platforms. Combined with PlayFab gaming services, this means less work for game developers and more time to focus on making games fun.

Both Google and Apple already offer similar gaming services on their respective platforms, though I find they are hardly ever implemented fully by the majority of developers. Apple has even gone so far as to kill off the app for its Game Center service, and while Google's Play Games Services is still kicking, I find there aren't that many devs out there that actually take advantage of some of its more prominent features, such as cloud saving.

This is probably why the idea of one unified gaming service like Xbox Live could be the ideal way to connect gamers across platforms, so that no matter which device or OS you prefer playing on, you'll always have access to the one account that brings together your gaming history and friends list. This is why the planned release of the SDK is a smart move on Microsoft's part, and it shows the company is finally interested in taking the mobile gaming market seriously.

Of course, the biggest hurdle for Microsoft will be attracting developers to the new SDK. It's going to be a tough sell when competing services like Play Games, Game Center, and Facebook are already available on mobile. I know I absolutely adore the instant sign-in of my Google account when opening a new game on Android, and I also know I won't be too keen to sign in through a separate service for something that's already instant and requires no thought. This is why I avoid Facebook log-ins in mobile games despite the added benefit of cross-platform cloud saving.

I suppose it's good to know Microsoft is working towards a better way to connect gamers across the many different platforms they chose to play on, and at the very least it'll be nice to have more options when it comes to the ways we connect with our friends or store our gaming history, though one still has to wonder how well this SDK will catch on in the mobile gaming world. While I have no doubt that we'll see some monumental mobile games released in the future with the Xbox Live feature baked right in, are indie devs actually going to bother with the SDK when Play Games Services and Facebook already provide similar options? I suppose only time will tell how all of this will shake out.

Oddly enough the session page for this announcement that's on the GDC website has had its description removed while I was writing this post, so I have included a screenshot of the entire page before the text removal so that everyone can view the full description. 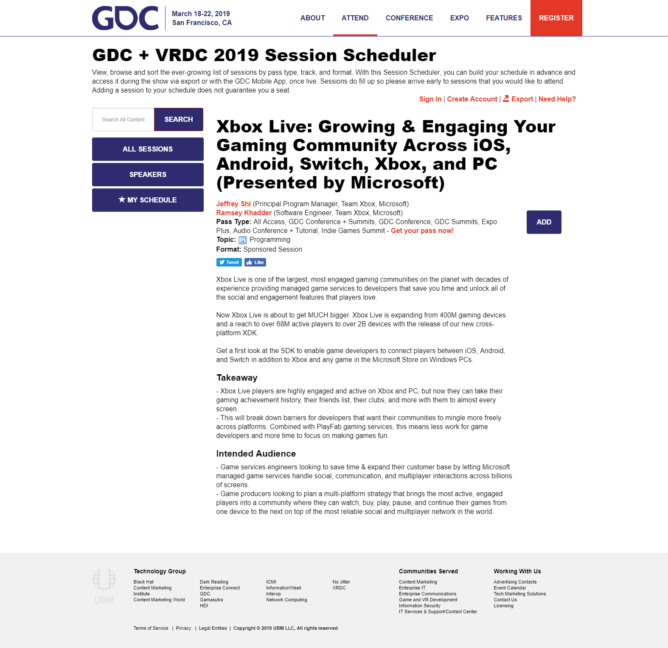 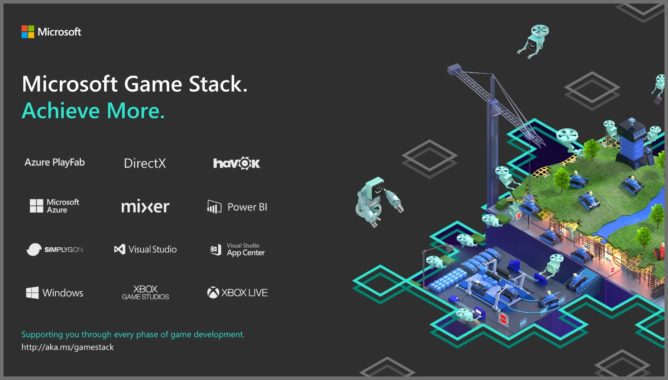 GDC is only a few days away, and since we already learned that Microsoft would be discussing its mobile plans as well as a new SDK that targets the platform, it's hardly surprising that the company has released further details ahead of its scheduled GDC session.

Today a post went up on Microsoft's developer website that details exactly what we can expect from the Microsoft Game Stack. Essentially it's a group of game-development platforms, tools, and services that should be useful for creating and operating video games.

The bundle is clearly aimed at everyone, whether you develop for mobile, consoles, or PC. The big news is that Microsoft Game Stack includes PlayFab, which is not only a complete backend service, but it also makes for a fantastic addition when combined with Azure. By joining the two platforms, it makes it easier to safely launch and scale up multiplayer games, a feature that I'm sure will interest many game developers.

Microsoft has also taken the time to announce five new PlayFab services that are available for private preview. So if you'd like to take a look, make sure to contact Microsoft to join the preview.

Microsoft's developer conference was yet again scheduled one day before Google I/O, and the Seattle-based company has used this time in the spotlight to announce its cooperation with the mobile game developer Gameloft. We already knew Microsoft had big plans to bring an Xbox Live SDK to mobile, and now Gameloft has confirmed that Asphalt 9: Legends, Asphalt 8: Airborne, and Dragon Mania Legends will be the first titles from the studio to support the service. Sadly no date was given for when these titles will be updated, all we know right now is that each title will be updated with Xbox Live support sometime later this year.

Paris, May 6th, 2019 – Gameloft, leader in the development and publishing of games, in partnership with Microsoft, is thrilled to announce that Xbox Live is coming to select Gameloft mobile games, starting with Asphalt 9: Legends, Asphalt 8: Airborne, and Dragon Mania Legends. This provides gamers streamlined access to popular Xbox Live features and functionality newly available on mobile.

Microsoft’s announcement, which was made earlier today at the //Build Conference by Microsoft CEO Satya Nadella, confirms a whole suite of features for players with Xbox Live accounts. Players will be able to unlock Xbox achievements, view their Xbox friends list, and compare their rankings with Xbox leaderboards, and more.

“We are thrilled to be partnering up with Microsoft to bring the Xbox Live network into Gameloft’s flagship games,” said Baudouin Corman, COO of Gameloft. “As one of the first partners to support Xbox Live on mobile devices, we seek to provide to our community more ways to experience our games and extend their fun, while seamlessly continuing to bring console, PC and mobile together.”

The new Xbox Live updates will be coming to these games in the coming year, with more features and announcements to be made in the future.

More information on Asphalt 9: Legends can be found here.

More information on Asphalt 8: Airborne can be found here.

More information on Dragon Mania Legends can be found here.