You're no dummy — you know just how fragile this digital life you've built can be — and so you take all manner of steps to protect yourself, using strong passwords, keeping on top of the latest software updates, and making backups of all your important data. And when it comes to Android, that's meant taking advantage of the system's native ability to save settings, apps, and personal info to Google Drive, ready to be restored when you need it. While that's been working just fine, it's taken until this week's release of Android Q Beta 1 to correct one glaring oversight, giving backup a new icon design that finally makes sense.

Good iconography is critical towards a system being accessible, and users have learned to instantly associate certain glyphs with specific actions. When working with files across the internet, one of the most useful and straightforward is a downward-pointing arrow representing the option to download — you see it in Gmail, you see it in Drive, and for most of us its presence is immediately understood.

You don't have to think twice (or even read) to know what this option does.

But in the case of Android's backup settings, Google's existing icon design didn't make a lot of sense. In Android Pie, backup was represented by a downward arrow inside a cloud. The cloud bit was clear enough — we're storing our files on Google's Drive servers, out in cyberspace somewhere — but why was the arrow pointing down? If anything, it seemed to represent retrieving data from the cloud, not backing it up in the first place — uploading it to the cloud.

Android Q sets this right, flipping that arrow on its head and giving us a backup icon that's logical, intuitive, and dare we say — correct. 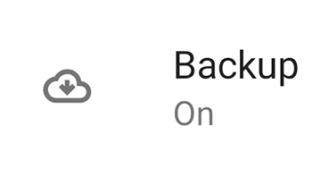 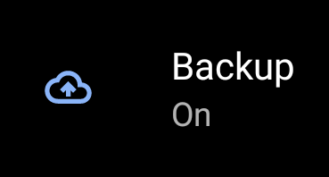 OK, but couldn't the old icon be read as the cloud downloading files from your phone, making the down arrow appropriate? Are you freaking kidding? That's just crazy talk, and we won't have that kind of madness corrupting the good, important work Google's doing with Android Q. Just, seriously — get out.

The new, correct, system backup icon is waiting for you in Android Q Beta 1. Flash it on your Pixel phone now and stop living in the backwards down-arrow past.