Screen recording is pretty handy for people like us, but there's never been a native solution in Android. Some OEMs include it as part of their software enhancements, and there are third-party apps like AZ Screen Recorder, which is the one I've been using in recent years. As rumored previously, Google is baking one into the OS with Android Q, although it's pretty borked right now.

To enable screen recording you need to head into the dev options (Settings > System > Advanced > Developer Options) and then find the Feature Flags menu under the 'Debugging' heading. Turn on the settings_screenrecord_long_press toggle and it's good to go. Well, except for the fact that it doesn't really work. 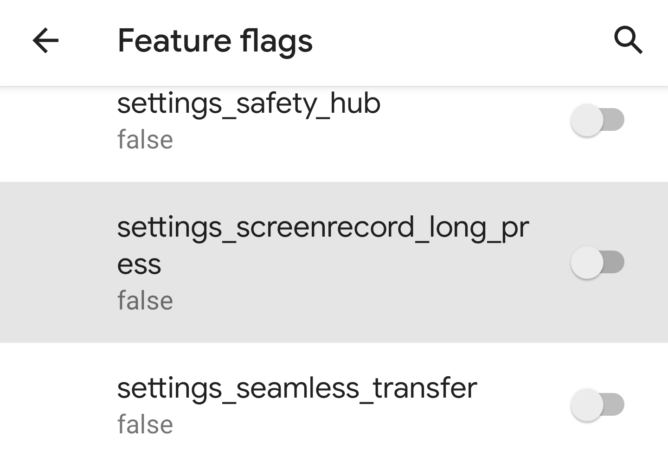 To start screen recording, you then need to hold the power button until the side menu comes up, and then long-press the Screenshot option. A panel will come up with checkboxes for 'Record voiceover' and 'Show taps,' below which you can 'Start Recording.' A further dialog appears to ask if you're sure you know what you're doing and warn you that everything on screen will be captured.

Once you start, a notification appears with a bugdroid icon and options to Stop, Pause, or Cancel the recording. That's where the trouble starts. For me, pressing Stop just locks my screen but doesn't end the recording. Pressing Pause causes a 'System UI keeps stopping' dialog, at which point I choose to close the app. Somehow, it still continues to record. Cancel works (or doesn't) in much the same way as Stop, at which point you realize the whole thing is a hot mess right now.

For some, the only way to stop the recording is to restart the device (which also turns the flag off). I was able to get it to stop by persisting with the Stop option until System UI crashed enough times for it to give up completely, but I might have just got lucky. Also, the first couple of times I tried the feature, I didn't get a notification at all, and only knew it was still running because 'Show taps' was still displaying.

At the end of it all, no matter how you manage to stop the thing from recording, you're left without any video evidence saved on your device. Maybe it didn't happen at all. Maybe I dreamt this "feature." Or maybe it's just a very early version that's not quite ready for prime time. That probably explains why it's hidden behind a flag in the first place. We're only at the first beta stage of Android Q, though, so there's no reason to panic just yet. Here's hoping it's more usable in Beta 2.

Seems to be working for some

Several commenters are pointing out that this is indeed working for them (lucky gits) on every generation of Pixel, so we're not entirely sure why two of us here can't get it working right on a Pixel 3 XL. #beta, I guess.