Some Italian-language Facebook users have noticed a new option in the app that invites them to "Paga con Facebook" ("Pay with Facebook") alongside a Bitcoin-esque icon. At the same time, fresh rumors have emerged about the company's plans to enter the cryptocurrency space with Facebook Coin, so it would seem that we're not far away from an official announcement on the subject.

As reported by Italian tech site Mobile World, the new payment option has appeared for both Android and iOS users in the country, but isn't yet available for me in the UK, nor have we heard of any US sightings. In case you were wondering, this certainly seems to be distinct from the Facebook Messenger payment service that's been around for a few years now. According to Mobile World, the new system works similarly to purchases on Facebook Marketplace, whereby the buyer has to send a payment request and then wait for it to be accepted, rather than simply buying with a single click or tap. Rather than using funds in your local currency with your bank as with payments on Messenger currently, there's talk that this new functionality will also come with a brand-new currency. 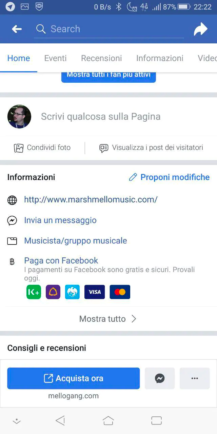 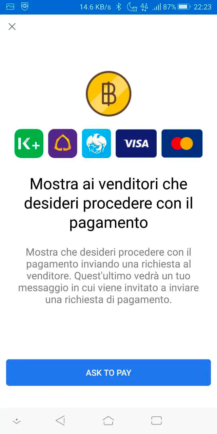 It's not the first time we've heard that Facebook wants to jump on the crypto bandwagon, but a new report from CNBC suggests that Zuckerberg hopes to emulate Chinese app WeChat. The rumored Facebook Coin currency would be used not just in the company's main product, but more importantly in WhatsApp too. Bringing secure payments to the messaging app's 1.5 billion users represents a potentially tremendous new source of revenue, as much as $19 billion by 2021, if some analysts are to be believed.

The strength of WeChat is that it's a jack of all trades, and WeChat Pay is a considerable part of its offering. It's no surprise, then, that Facebook wants to copy this model, and if it can make Facebook Coin an integral component of Facebook, WhatsApp, and even Instagram, it could stand a fair chance of success. WeChat users can purchase goods and services all over China using a simple QR code on their phone, something Facebook would presumably like to mimic in emerging markets such as India where WhatsApp is already the dominant chat app.

Facebook's biggest challenge in all of this is the same one if faces across everything it does right now, and that's the general lack of trust the company garners. There's apparently a renewed focus on privacy within the organization, but many of us remain exceedingly skeptical. If people don't trust it with their data, it's unlikely they'll trust it with their hard-earned cash.