All jokes about Android's stability the bugginess of Pixel phones aside, Google has generally become much better about introducing new features in a usable and largely finished state in recent years. After all, do you remember how long Gmail and Google Maps turn-by-turn navigation were in beta? Literally years. And perhaps for some of that time they were betas in name only, but that was emblematic of a larger (and admittedly problematic) philosophy of self-awareness at Google: that the products didn't always work right, and users were expected to deal with that.

Some parts of Android Q seem totally ready to go on dark theme.

Fast forward to 2019, and one of the Android team's white (dark gray?) whales is finally surfacing: a dark system theme. At least, we have every reason to think it is. If you had the dark system theme enabled on your Pixel in Android 9.0 (which darkened some elements of the system UI) and flash directly to the Q beta, basically the entire system will be in shades of gray and black (enabling battery saver also turns it on). Settings, quick settings, notification cards, the launcher, Google Discover, and even apps like the file browser, phone dialer, YouTube, and Messages are dark. Some of those were updated with dark themes in the recent past, separate of this new Q dark theme, which many correctly assumed to be a portent of the long-awaited change.

Still, it's obvious just how far away Google is from being able to call this effort complete. Core applications like Gmail (which just underwent a massive UI overhaul), Chrome (a dark theme is underway), the Play Store, Maps, and the Google app itself remain unchanged. That's not to mention the dozen-plus other highly popular Google apps on Android. All of them represent distinct and largely unrelated teams inside Google, and all of them have different feature prioritization roadmaps. Were the dark theme to launch with Android Q officially in Q3 of this year, I have strong doubts that every major Google app would be ready to support the change without a massive, united push internally to do so. 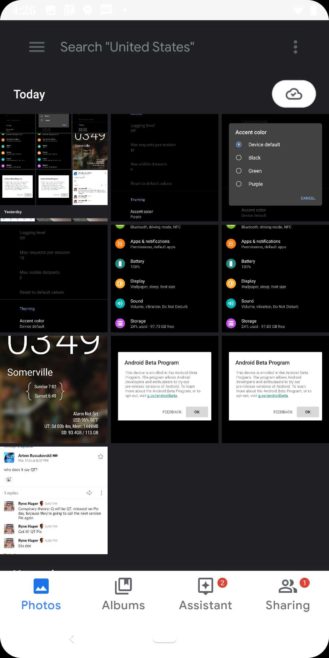 Other apps, like Google Photos, are clearly not... quite there yet.

This speaks to a kind of Android fragmentation we don't discuss very often these days: the problem of consistency even within Google's core applications. Out on the very bleeding edge of "new Material Design" we have apps like Gmail and the Discover feed, which have drawn considerable outcry for their information density and use of (rather, the lack of use) empty space. On the other, apps such as the Play Store, YouTube, and Google Maps seem to live in their own microcosmic interpretations of the original Material Design and the new one, with internal design imperatives they iterate and cling to despite clearly being out of step with the larger Google design ethos. If Google itself can barely keep up with its own design conventions (the basis for which is coming up on a year old, by the way), how does that bode for the will of 3rd-party developers to embrace something like dark mode?

Android has a long history of failed efforts to encourage developers to embrace the platform's design standards, dating back to the introduction of the "quantum paper" concept that birthed the original Material Design five years ago. Much of that came down to mixed messaging from Google, which within its various app teams produced incongruous interpretations of the Material Design guidelines. That led to confusion: Google seemed to be communicating that its "guidelines" were just that, and its own app teams were left to do with them as they desired, rather than set examples of consistent good practices for other developers to follow (hello, Play Store). As such, many developers implemented Material haphazardly or, more frequently, not at all.

And certainly, there is nothing Google can hope to do to convince large corporations which have no interest in promoting any interface aesthetic that is not their own Brand(TM) to adjust to Android's larger conventions. Look at any banking, airline, or social media app and you'll see a hodgepodge of custom, iOS, and Android elements living together in visual cacophony, victims of design by committee. No matter how consistent Google's Material Design guidelines are adhered to, and no matter how on point its dark themes may be, some apps will never evolve or adapt - that's just reality.

But for the many apps by smaller developers who actually do care about interface and user experience, they'll likely look to Google for guidance and, perhaps more importantly, strong momentum. If Google's entire application suite launches ready for dark mode with Q, there will be substantial pressure from users and a sense of general propriety pushing them forward. But if it becomes clear that even Google can't settle on just how Android should look in the dark, we may end up in a Material 1.0 situation all over again. Let's hope five years of learning means Google can finally deliver.