We've been wondering when the beta for Android Q would land, given that past releases have all occurred at around this time of year. The bug tracker for the Android Q Beta has just been opened up by Google, and according to the date filter, the beta is going to launch later today, March 11th. 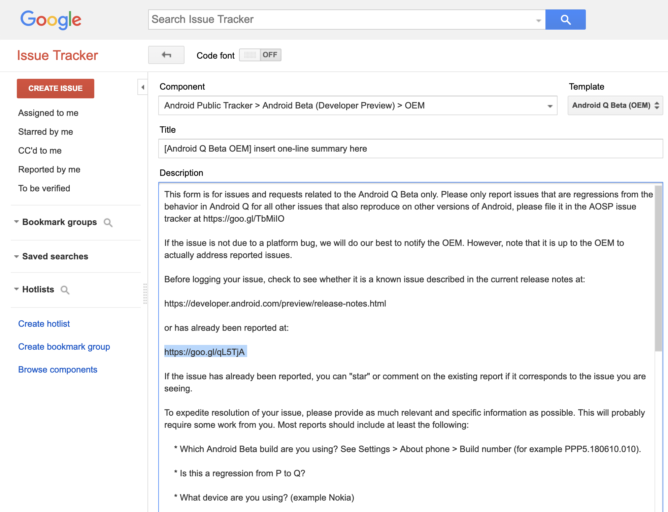 First spotted by XDA-Developers' Mishaal Rahman, the bug tracker for the Android Q Beta has just been unveiled to the public. If you go to the goo.gl link in the description for bugs that have already been reported, you'll be taken to an Issue Tracker search with a date filter for March 11th filled in. What this means is that only reports made after today, March 11th, can be seen, so that only reports from the general public are shown. This is essentially confirmation that the Q Beta will be released later today.

If you'd like to have a look for yourself, hit the source link below and switch the dropdown menu under "Component" to the OEM option. The wait appears to be finally over, and with more phones expected to get early beta updates this time around, more people might get to join in on the fun.

Unfortunately, March 11th has come and gone without any Android Q Beta releases from Google. Our apologies for getting your hopes up. However, it looks like Wednesday, March 13th might be the date to mark in your calendar.

Historically, developer previews and betas have been released on Wednesday, and the screenshot above, taken from a reddit comment, is reportedly from a Google developer calendar. Here's hoping we have better luck on the 13th.

Allo is shutting down tomorrow, March 12 — here's how to download your chat history