That's right, the Google app now brandishes that special 5,000,000,000+ install number on its listing, and is part of an elite club consisting also of Play Services (doesn't really count), YouTube, and Maps. No third-party app has made it that far, and I wonder whether some will start making the same leap soon or if it will take them a lot more time. Back in 2015, WhatsApp reached 1 billion installs only four months after the Google app, but 5 billion is a different beast altogether. Google has the huge benefit of being pre-installed on almost every Android device out there, and it's tough to imagine that the same number of people would seek out the WhatsApp app and install it. Only time will tell, I guess. 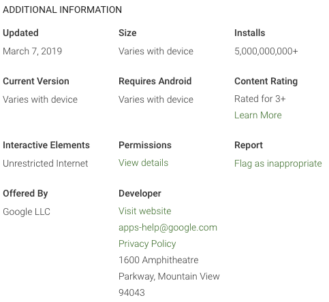 Samsung pushes One UI to its Galaxy Wearable app