Duo has left us waiting on the launch of some big new features, including group calling, but the latest update to v49 doesn't appear to be launching either of those quite yet. However, there are a couple of smaller touches to discuss, including special effects for the Hindu festival of Holi and some type of new video invites.

The Indian holiday of Holi is coming up on March 20th and Duo is preparing to join in the festivities with a set of themed chat effects. Similar to the Valentine's Day effect featuring floating hearts, Holi will be featuring effects inspired by the Festival of Colours, including floating foods, colorful flowing liquid borders, sunglasses, and colorful powders.

One ostensible difference from the Valentine's Day floating heart effect is that it looks like you'll have the option to pick between different effects for Holi, and possibly even run more than one at the same time.

I can only guess when the effects will go live, but my hunch is that we'll probably get a look at them about a day or so before the festival begins. Naturally, they will be limited to phones that are capable of running the effects, which will almost certainly rely on hardware acceleration. It's also possible the effects will be geographically restricted, but there are too many arguments for making it widely available, so I doubt this will be an issue.

A new line has turned up that raises the likelihood Duo will begin supporting video invites. The exact nature of what that means isn't entirely clear, but this likely relates to the feature used to encourage new people to join Duo. 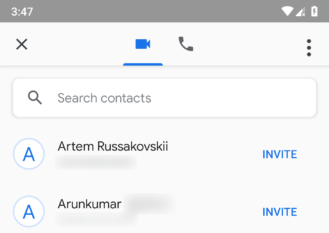 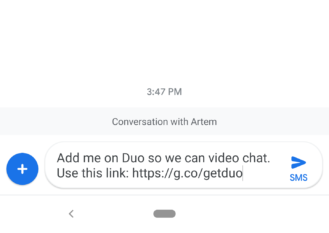 While it's fine and dandy to wait for the people you know to discover Duo on their own, most potential video chatters aren't going to learn about it unless you give them a little push. Scroll below the contacts that are already reachable through Duo and you'll find a second list with an 'Invite' link next to their names. Tap on this and you'll go into a chat box with a pre-written (but editable) message encouraging people to join. This message is sent through a system called App Preview Messaging that allows users to receive messages from apps that aren't installed on their devices.

If video invites are to be a thing, you'll probably be able to record your message and send a link to the video through the same system.

There aren't any details or other resources to give much background, so most of this is conjecture. It's also plausible the invites will be used for other purposes, like sending a video message to somebody to invite them to a future call.