True wireless earbuds are big business these days, and they’re especially popular since Apple released its to-be-seen-with AirPods. Samsung's first attempt at this product category in 2016 was a little disappointing, but the updated Gear IconX that came out the following year offered improved battery life, a redesigned case, and better connectivity. The $200 price tag was too high for what you got, but frequent discounts made them a slightly more viable prospect.

Fast-forward to 2019 and Samsung is back with its latest iteration. Galaxy Buds is already a far more appealing and marketable name. They also cost much less than their predecessors at $130, even undercutting the AirPods by a full $30. As is often the case, it's clear who Samsung is going after with this product. Headline features such as 6 hours of continuous battery life and wireless charging are exceedingly tempting, whether you own a Samsung phone or not. Importantly, and somewhat surprisingly given the low price, they also sound excellent. 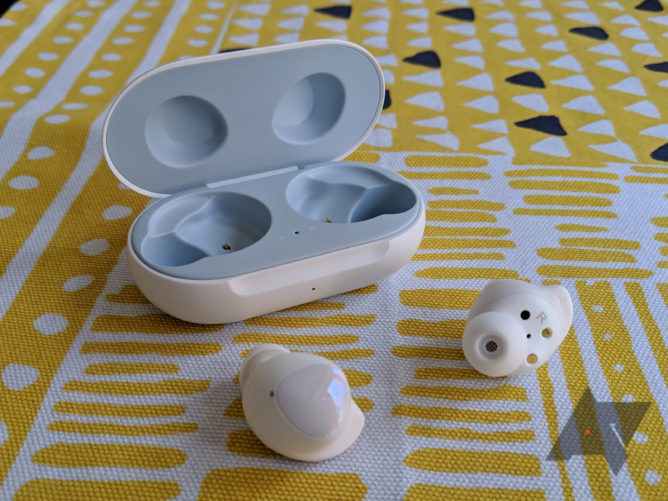 Samsung is definitely getting better at designing products as time goes by, and the Galaxy Buds are a case in point. They’re not especially interesting to look at, in my opinion, but they aren’t unattractive. If you like the pearlescent finish of the white Galaxy S10, the touch portion of the white earbud is similar to that (black and yellow models are also available). As for the case, it’s one of the best around. It’s almost worryingly small and as such very easy to fit into various pockets. The earbuds are also super easy to take out and put back in, which can’t be said for every similar product I’ve tested. Unlike other cheaper alternatives, USB-C has been used for the charging port (as it should in 2019), and you can get 1.7 hours of listening time from a 15-minute charge. 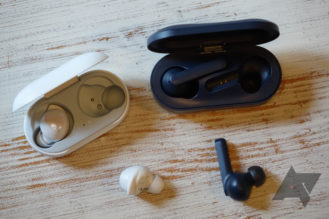 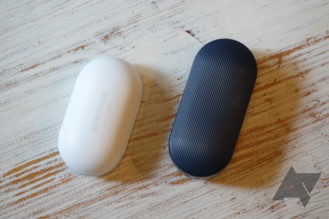 Next to the Mobvoi TicPods Free.

The case also has a neat trick up its sleeve: You might have seen a Galaxy S10 poster with a Galaxy Buds case sitting on top of it, and that’s to make use of the reverse wireless charging in Samsung’s latest phones to top up the earbuds. This isn’t an exclusive feature, either; you can stick the Buds on any Qi wireless charger and even use the reverse charging on the Huawei Mate 20 Pro. At 5 watts of output, it’ll be pretty slow, but it might help you eke a little more out of your earbuds if you’re in a tight spot. At the very least, it’s something nifty you can show off to your friends.

When you’ve got them in, the Galaxy Buds are plenty comfortable, owing to their diminutive size and lightness. Subtle silicone wings are there to help them remain in place, and they have felt secure for all of my daily routines. You might need to use bigger wings to ensure they stay put while running or doing other forms of exercise, but they are splashproof to protect against sweat (IPX2). In the retail box, aside from the earbuds and case, you get a USB-A to C cable and a selection of different tips and wings to help you get the right fit. 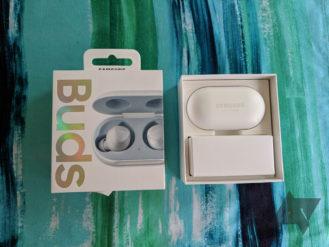 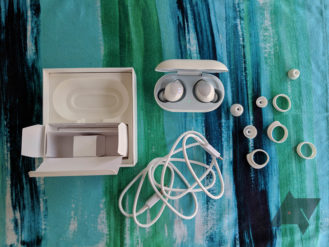 Regardless of the price, true wireless earbuds have to sound half decent to capture the attention of the masses. I’m glad to report that the Galaxy Buds exceeded my audio quality expectations. They get nice and loud, which is something I’ve found lacking in many lower-cost products of this type, but the sound is also rather refined. You get very crisp and clean mids and highs, and the bass is pretty much spot on. 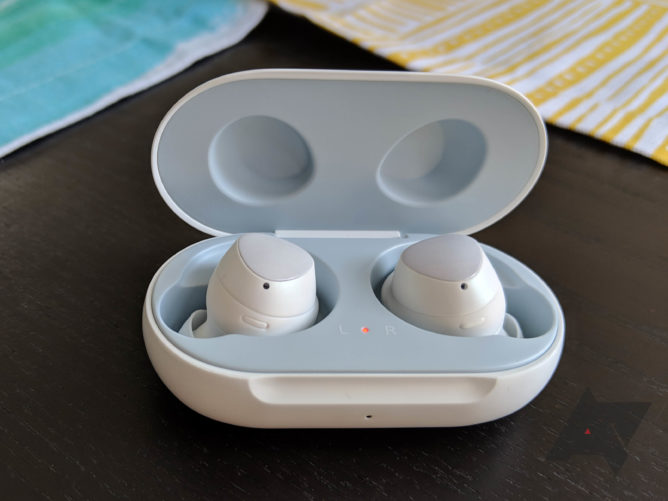 Even so, if you’d like to tweak the sound profile, the Galaxy Wear app has a built-in equalizer. This works well if you want to add a lot more bass or treble, but it also muddies the mix substantially — I preferred them with the EQ switched off. I noticed only a couple of connectivity dropouts while using the Buds, but both of those times were in an airport, so I assume there was some kind of interference that couldn’t be helped. Bluetooth 5.0 is on board, in case you were wondering. In terms of codec support, you're looking at SBC, AAC, and Samsung's proprietary scalable one.

While there’s no ANC, the isolation is excellent, and I found them much better on a flight than something like the TicPods Free. The touch controls aren’t bad, though I’m still not a huge fan of them in general. Samsung’s solution is at least straightforward, and you can modify the long-press on each side to call up the assistant (Google or Bixby), let in ambient sound, or control volume. Proximity sensors know when you take the earbuds out, but don’t pause the music when you take just one out. This is different from how a lot of these products work, but I actually like it this way. It makes it easier to have just one ear in if you need to, and you can also hold one to your mouth to slightly improve the otherwise mediocre microphone performance during calls. Sadly, no true wireless earbuds I’ve used up to now have been very good at calls when there’s a lot of background noise.

The Galaxy Buds thankfully lived up to their promise of good battery life. I was able to get around 6 hours with a mixture of podcasts, music, and video. I also used them on a flight with the volume pretty high during testing, so I'm confident the battery is good for most use cases.

The app has useful a useful feature for letting surrounding sounds come through and Find My Earbuds is great for when you misplace them.

Yes. Honestly, the Samsung Galaxy Buds have left me pleasantly surprised in more ways than one. I didn’t expect them to sound anywhere near this good for the price. Nor did I expect the case to so small and pocketable, nor the app to be so well done. These tick pretty much all of the important boxes — sound, battery life, comfort, good case — and that’s quite remarkable considering the $130 MSRP. If you buy a Galaxy S10 you’ll probably get these thrown in for free, which is a great bonus. As much as I enjoyed the Sennheiser Momentum True Wireless, they are not worth paying $180 more for. Save yourself some cash and get the Galaxy Buds instead. 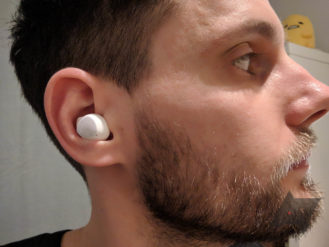 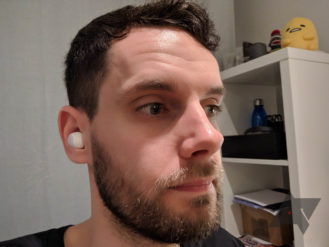 Uber Rewards loyalty program rolls out to all US riders