Back in 2016, T-Mobile rolled out the T-Mobile One plans, which replaced the senior (and often cheaper) Simple Choice plans. Many subscribers from the era still have the old plans, and a further subset is being notified starting yesterday of a pretty swanky complimentary upgrade: unlimited high-speed data. The lucky "loyal T-Mobile customers" will get bumped to the new plans on 3/16, unless they opt out for some reason. 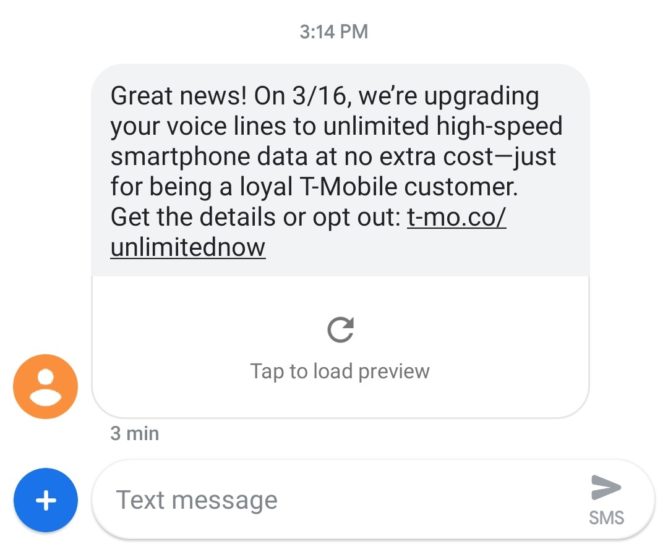 The SMS sent to eligible customers. Image via Reddit.

The full details of the change are available on a promotional page at T-Mobile's site, but it's a pretty straightforward upgrade. Eligible customers — determined via criteria we aren't aware of, though it seems to be mostly those with 4GB+ plans — are being notified via SMS starting yesterday that all their voice lines are being automatically bumped up to T-Mobile's unlimited data plans on 3/16. The only catch that we can spot is that the change does not apply to hotspot/tethering data or data/only lines, old data limits still apply in Mexico and Canada, and lines added to your plan later won't get the same complimentary upgrade.

If you'd like to specifically opt out of the change, you can via the form here on T-Mobile's site. Either way, Team Magenta customers that qualify will get to enjoy the joys of unlimited data in just under two weeks.