With YouTube Music set to eventually replace Google Play Music entirely — the last GPM update with any appreciable change was a year ago — the developers are in the process of migrating features  so users won't be left wanting for too much. Since the last several versions have only contained minor visual tweaks and some of the signs of feature migration, we've been waiting for something more substantial to cover, and with the version number jumping to 3.0 and adding Android Auto support, this seemed like a good time. This post will contain the collective changes and teardown topics from the last few versions.

Author's note: This post was originally intended to go live much sooner. A severe snowstorm damaged power lines and anything resembling Internet access in my area. This won't stop teardowns from coming out, but they will be delayed while I slum it in restaurants and coffee shops that are foolish enough to leave tables anywhere near a working outlet. Wish me luck, and more importantly, unusually lengthy battery life.

Unsurprisingly, there have been quite a few changes to the UI over the last several versions. If you want to get nitpicky, you can find dozens of examples where things were nudged over by a few pixels, some text styles were changed, or other similarly trivial adjustments appeared. 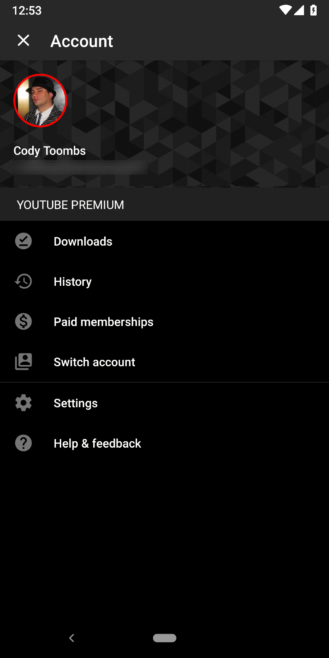 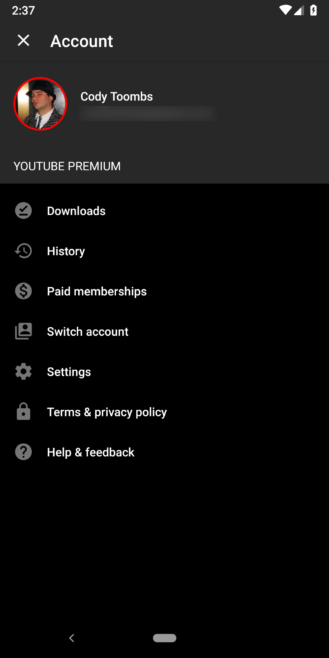 Some of the more notable changes came to the account screen, which saw the background image removed while the name and email were shifted up to the right of the avatar. The tiny separator line above the Settings option was removed, and there's now a link to the terms and privacy policy, but that seems to be popping in and out of existence. 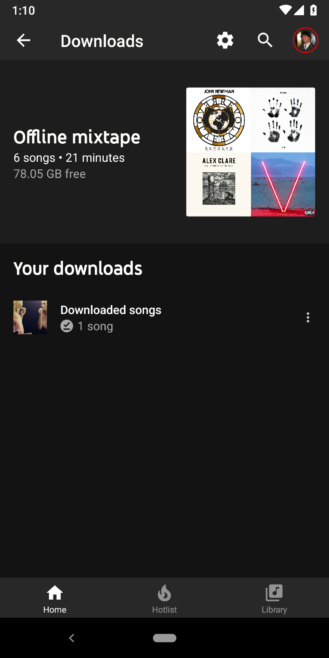 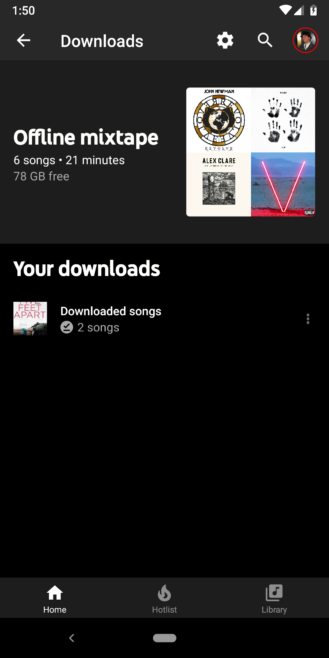 If you're really digging for some subtle changes, you may have also noticed the header fonts are a bit ... bolder. I personally liked the look of the older versions, 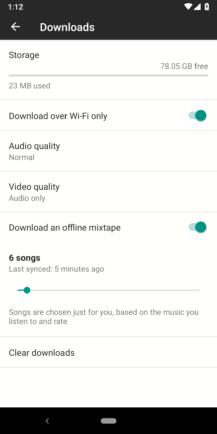 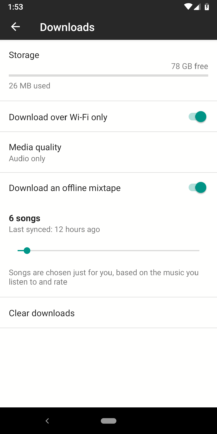 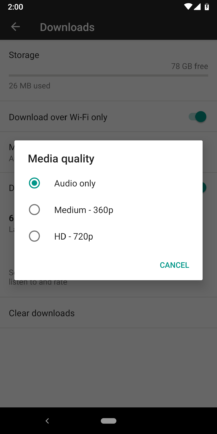 In the latest update, we also saw the removal of a setting for offline storage that had allowed users to pick audio quality for downloaded tracks. This setting was likely one of the early transitions from Google Play Music, which was known for offering tracks in low, normal, or high quality. Now the sole remaining option invites users to choose just the quality for video: HD, medium, or audio-only.

I suspect the reason for removing this setting was to eliminate points of confusion. It wasn't really clear if the setting applied only to audio from the Google Play Music library or if it also modified audio taken from YouTube videos. Removing it now feels like a hint that we're going to get whatever YouTube wants to send; which could be the highest quality available, whatever YouTube deems to be an acceptable standard, or possibly a quality level that varies based on some criteria.

I just wanted to add a quick meta note here. I happened to have been in the middle of re-writing this section when 3.03 hit and Android Auto support went live. While it's not important to deep dive the specifics anymore, I thought some people might at least find it interesting to note that the first sign of Auto support came in v2.61. YouTube added a declaration file named automotive_app_desc that tells Android Auto about the services offered by an app; in this case, YouTube Music is declaring itself as a media service. It wasn't until v3.03 that the manifest was updated to point to this file and make Auto support official.

Earlier this month, a teardown of the main YouTube app revealed that users would soon have the option to download videos in 1080p for offline viewing. It should come as no surprise that this won't just be for the primary app, YouTube Music will be joining in on the HD train, as well.

If you've used GPM in the last couple of years, you're probably familiar with a setup step that asks you to pick your favorite genres and bands. A version of this step has been added to YouTube Music, but there appear to be some interesting differences.

The new version of this learning tool seems to take the approach of playing samples from 10 songs and asking you to like or dislike those samples. It's not quite clear if you'll start by telling the app about favorite genres or bands before getting to the samples, or if perhaps the samples begin the process, but it does seem like YouTube may be focusing on individual songs rather than generalizing around bands.

For several versions, YouTube Music has been progressively building out a feature that will immediately begin playing music when the app launches. The original name for this option was Autoplay, but it has been renamed to Quick Start with the v3.03 update

Based on the text and other visible signs, this feature appears to be precisely as simple as it sounds: Launch app and music plays... This makes sense in some ways and some users will surely want it, but I can't shake the thought that a feature like that makes more sense as an app shortcut. There is already a shortcut to immediately play the offline mixtape, so this could logically be the streaming version of the same thing. Unfortunately, that's also limited to recent devices and it's less discoverable than a regular setting.

We're talking about playing audio files that you added to your device. Some users would say it's pretty unnecessary since they'll only ever stream music, and others consider it a requirement so they can fit their own personal library into the mix. Judging by numerous comments, quite a few people thought this was sure to be one of the features that would almost certainly never make it into the app, but it appears that YouTube is going to surprise us with that one.

Strings for this feature were added over the span of several updates, adding up to a couple notable points: You can filter searches and browse just local files, and your own songs can be added to playlists alongside streamed music. It also appears you can delete local tracks from your device through YouTube Music.

I don't believe it's an exaggeration to say that one of the most hated aspects of Google Play Music is the infamous device limit. Basically, you can register up to ten devices at a time and only those devices are allowed to use Play Music... but not simultaneously. From there, you can deauthorize up to four devices per year, a rule that became strictly enforced a couple years later. You can also contact customer service to request a total reset of all devices on your accounts, supposedly limited to once  for the lifetime of your account (that part doesn't seem to be strictly enforced).

While this limit doesn't necessarily cause too many problems for somebody that only upgrades a phone every couple of years, it certainly has been a problem for quite a few people, especially since the device limit includes a few additional platforms like Android TV.

Unfortunately, this system appears to be coming to YouTube Music. A couple new lines of text make it clear that device limits and customer service resets are going to be respected. Alongside those lines, there are two more that represent existing YouTube rules regarding how many devices are allowed to download regular videos and purchases for offline viewing.

It's worth noting, the device limit rules could be limited to just the audio library that will transition from Google Play Music, not the YouTube Music library that can already stream to any of your devices without deauthorizing any of them.

Nova Launcher v6.0 stable is rolling out to the Play Store with searchable settings, icon ...

14 new and notable Android apps and live wallpapers from the last two weeks including Serial ...