Samsung isn't afraid to experiment with different types of notches in its mid-range offerings — having tried it all, from a hole-punch in the Galaxy A8S, to a OnePlus 6T-esque sloping teardrop in the M20, to more traditional bezels in the A9. Two new devices were announced today, the Galaxy A30 and A50, featuring teardrop notches of the Infinity-U design Samsung revealed last fall. These phones are likely headed to the Indian market in the coming week.

The Galaxy A50 is the first phone to run on Samsung's Exynos 9610 chip, which was announced last year. The device seems photography-focused, with three rear cameras — a regular, a wide-angle, and a depth-of-field camera, somewhat of a rarity in a mid-range smartphone. Samsung has switched to an in-screen fingerprint sensor — there's no mention of ultrasonic here, so it's likely optical. Samsung's built both the A50 and A30 using something it calls Glasstic — and while we don't know for sure exactly what that is, we're guessing it's more plastic than glass. The presumably cheaper of the two devices, the A30 has many specs in common with its sibling, including the exact dimensions. The fingerprint sensor is rear-facing though, an advantage if you ask me, and the camera and internals are decidedly lower-end. While there's no formal word on pricing or availability yet, the phones will likely be launched in India on February 28th. With above-average camera specs, large batteries, a headphone jack, and expandable storage, these seem like the type of devices media-hungry teenagers would lap up. The Indian mid-range smartphone segment is one of the hottest in the world, with the likes of Xiaomi and Honor having snatched a lot of market share from Samsung. If priced right, these devices may be attractive value-propositions.

The phones launched in India today, along with a new budget offering: the Galaxy A10. 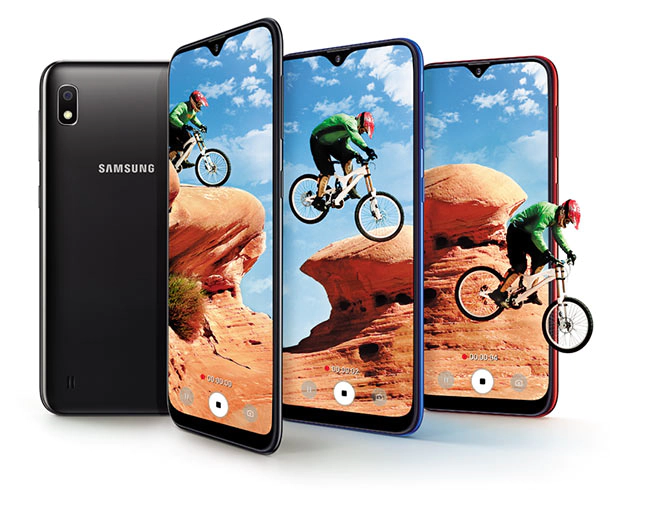