Google's Chrome OS can run on much more modest hardware than the average Windows-powered laptop, but the cheapest Chromebooks still have to cut corners when it comes to the display, keyboard, and connectivity. The Lenovo C330 Flip Chromebook avoids many of those cheap Chromebook pitfalls, which is why we gave it our "Most Wanted" award. Now, you can get this device for just $219.99 at Newegg, which is $80 off the already totally reasonable price. 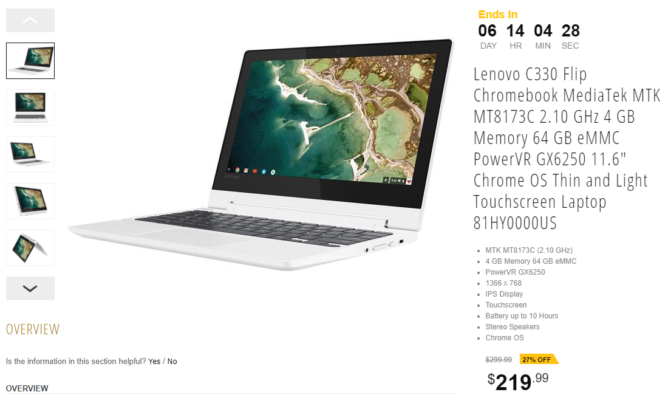 There's a 32GB model of this laptop, but the 64GB is a good deal even at MSRP. That extra space helps with running Android apps, and you can even spin up Linux on the C330 now. Newegg says the sale price is good for the next week or until supplies run out. Don't wait too long; the C330 sold out quickly the last time it was this cheap.

[Update: And it's back] HTC's mail app vanishes from Google Play Store