By holding its event ahead of Mobile World Congress (MWC) for the first time in a few years, Samsung ensured maximum hype surrounding the announcement of the Samsung Galaxy Fold. Some of that hype may have died down once the design and the $1,980 price tag came to light, but the general vibe is that it's nice to have an exciting new form-factor in what has become a relatively stale industry. As the press conferences from the other major tech companies get underway here in Barcelona, we expect to see a few more devices with flexible screens, and the first of those to be unveiled is the Huawei Mate X.

The Chinese OEM has a different vision for how this type of product should look and function. We got to see it ahead of today's announcement, but only from afar — no touching allowed. Unlike Samsung's inward folding large display and separate, smaller secondary screen, the Mate X has a single 8-inch OLED panel that wraps around the outside of the device. When in phone mode, there's a 6.6-inch, 19.5:9 main display with a 6.38-inch rear portion. What's most impressive here, especially in comparison to the Galaxy Fold, is that there's so little bezel around the screen. There is, however, a strip down one side that houses the three cameras with Leica lenses and many of the internals — "a big, fat, ugly bar full of guts," as described by David. When unfolded, the majority of the body is 5.4mm thin, while the bar and folded thickness is 11mm. 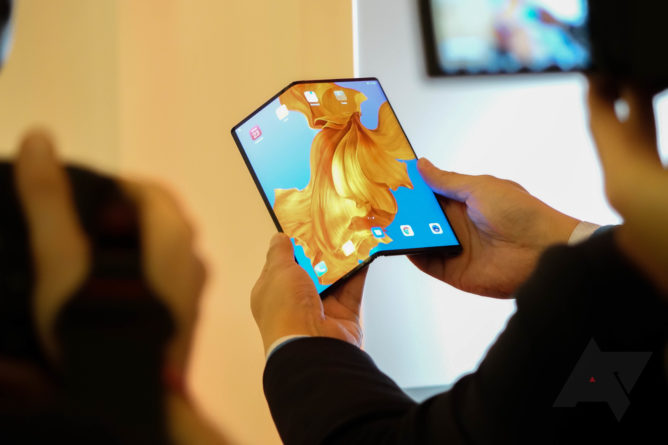 An outward fold means the plastic-covered screen is always going to be at risk of picking up dents and scratches, which isn't a problem you'll have with Samsung's encapsulated solution. Huawei also showed us a special case that protects the rear and side portion when in phone mode, but you have to take it out to switch to tablet mode and that takes away from the convenience somewhat. When folded, the rear screen can be used for selfies and showing others what they look like when you're photographing them, which is kind of neat. 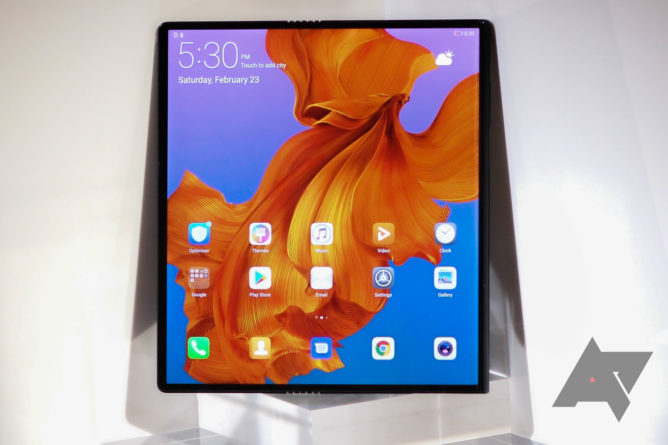 The specs for the Mate X include Huawei's high-performing Kirin 980 processor, a Balong 5000 5G modem with a max speed of 4.6Gbps, two batteries with a total 4,500mAh capacity. Following on from the rapid 40W charger that came with the Mate 20 Pro, Huawei is going to include a crazy fast 55W charger with the X. On the right side, there's a power button that doubles as a fingerprint sensor, and the USB Type-C port is located on the bottom edge of the side panel. According to the presentation, the bar also makes the device easier to hold in tablet mode. 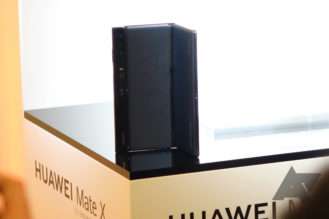 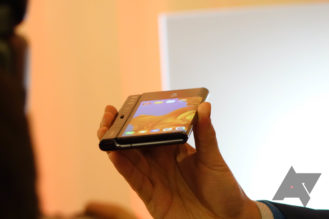 Without using the Mate X, it's hard to say whether Huawei has taken the right path with its design. To me, it's far more elegant-looking that the Samsung Galaxy Fold, with smaller bezels all around and a more usable main display for phone mode. As with any device in this new form factor, I'm skeptical about the utility of a large square display. The 8:7.1 display ratio is not ideal for video or games, so we'll have to get used to letterboxes. From certain angles, there's also a very visible crease down the center of the screen where the fold happens, so that's a cause for concern. Hopefully, Huawei can iron that out before the phone/tablet goes on sale to the public later in the year. We'll have to wait a little bit longer to get a proper hands-on with it and see how well it performs, but the early signs are promising. 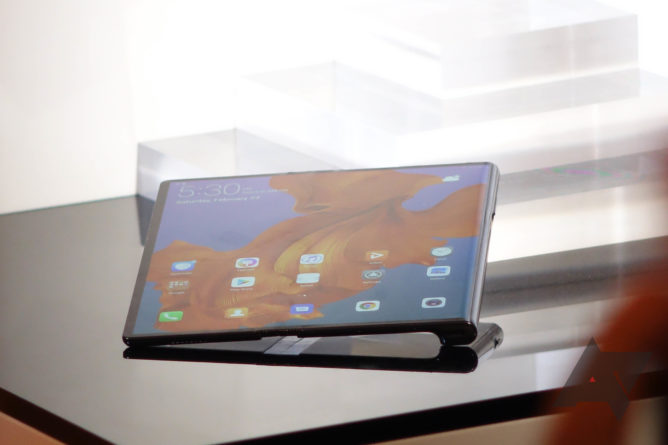 The price for the Mate 20 X with 8GB of RAM and 512GB of storage will be €2,299, which works out as around $2,600 if you do a straight conversion. That's considerably more than the $1,980 Galaxy Fold, which is our only other reference point at this time. "Middle of 2019" is the vague release date that was given, so it could be a little while before we get our hands on the finished article.