Back at IFA 2018, we managed to grab a quick hands-on with Lenovo's Yoga Chromebook 4K. Intended for those who like large 15.6" laptops and want an ultra high-res display, the Yoga Chromebook C630 packs some impressive specs that put it right up there with the Acer Spin 13 and Pixelbook. All of that comes in a beautiful chassis for under $1,000. Suffice to say, we were impressed.

In practice, it's a solid machine that performs admirably well. As you might expect, battery life is its weakness and I think that 4K is not the ideal resolution for laptops. However, its strengths outweigh the downsides, meaning that the Yoga Chromebook C630 is a good purchase if you need a large Chromebook that powers through everything you can throw at it. 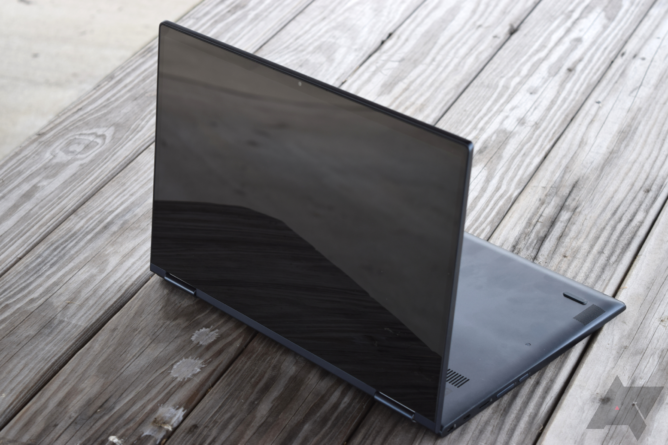 Right off the bat, the Yoga Chromebook looks fantastic. It comes in this beautiful "Midnight Blue" metal body that is just stunning. Unfortunately, that beauty is very easily marred by fingerprints — it is impossible to keep this laptop clean and almost as difficult to clean it up.

When open, the Yoga Chromebook still looks nice, even with its width. Unlike other manufacturers, Lenovo opted to put its logo on one of the 360-degree hinges, so it's not quite so in your face whenever you're looking at the screen. What is distracting, however, is the bottom bezel. While the sides and top are fine, the lower one is proportionally much, much thicker. If you have a dark wallpaper, it's not as noticeable, but otherwise, it's not easily overlooked. 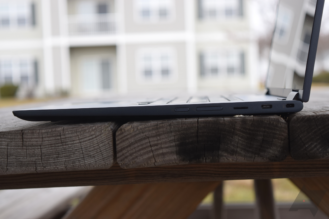 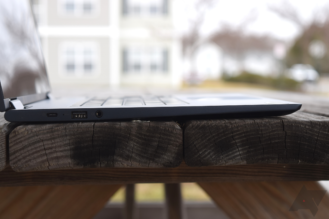 Large Chromebooks are not that common, especially ones with the kind of horsepower that this Yoga Chromebook variant is running. Though I have found myself preferring smaller laptops like the Pixelbook and Huawei Matebook X Pro, I can appreciate the larger screen. Given its size, it should come as no surprise that it's a heavy machine, but it's difficult to convey just how heavy. It's definitely not good for carrying around, especially if it's in a backpack and you're going to be walking for a while (i.e. it's not a good convention or campus laptop). It also is very slippery and didn't sit very well on my lap.

The weight almost completely obviates one element of the 2-in-1 function. Not only do you then have a comically oversized tablet once you flip it all the way over, but you also get a lot of wrist strain thanks to its bulk, especially if you try to hold it one-handed. I used the Yoga Chromebook in this mode a couple of times and it was not a comfortable experience. 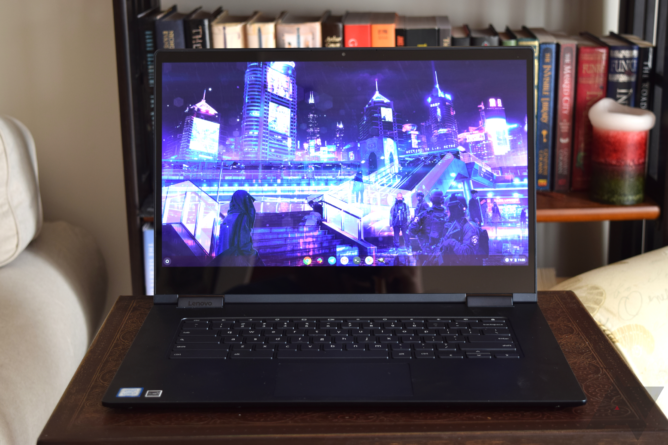 The highlight here is the display, rather, that the resolution is what sets this particular configuration apart from its brethren. I laughed at the idea of 4K on a Chromebook (as I do with any laptop), and I found my skepticism to be well-founded. During my time with it, there was not a single instance in which this high of a resolution made the user experience better than something else. Sure, there are fringe use cases like the 4K content on YouTube and Netflix, but I see no reason to pay the extra money for this. It's like manufacturers forget that 1440p (or similar) is a thing.

As for the quality of the display, it's fine. Colors are really nice at full brightness, but it loses its pizzazz at noticeable increments once you fall below 70%. I found the Yoga Chromebook to be usable indoors during the day, as long as I had the blinds closed. When I tried to work outside, even in the shade, I had a much harder time seeing anything. Full brightness helps, but when you're on battery power, that's not really the best option. 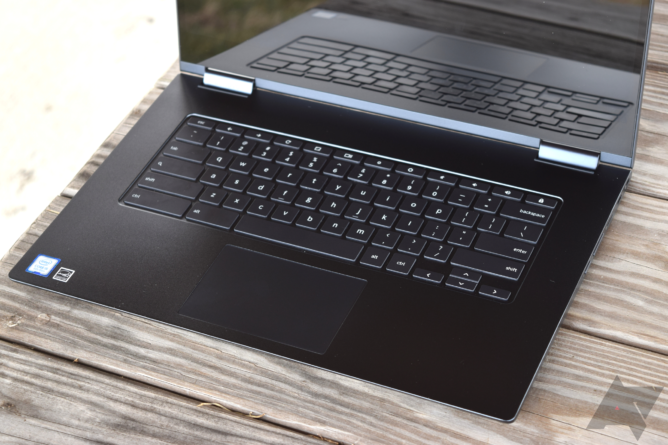 I have yet to find a laptop keyboard that I like more than the Pixelbook's, but the Yoga Chromebook has one that's almost as good. Travel is comfortable and the keys bottom out without feeling squishy. There's no click or any satisfying tactile feedback, but I enjoyed typing on the keyboard for the last week. The backlight is definitely nice, especially since some versions of this Chromebook lack it.

The trackpad is also a major strength here — it's smooth and very accurate. Given the size of the laptop, I think that it could have been bigger, but that's just me. My fingers glided across it every time I used it, which also means that it's easier to use Chrome OS' gestures.

As we get into premium Chromebook territory, the typical school of thought is that the higher-end hardware is lost on a low-resource operating system like Chrome OS. Though there are arguments for either side of that debate, the Yoga Chromebook in this case uses the extra horsepower to push all of those pixels. And as you might expect, running an i5-8250U and 8GB of DDR4 RAM, this laptop is crazy powerful. 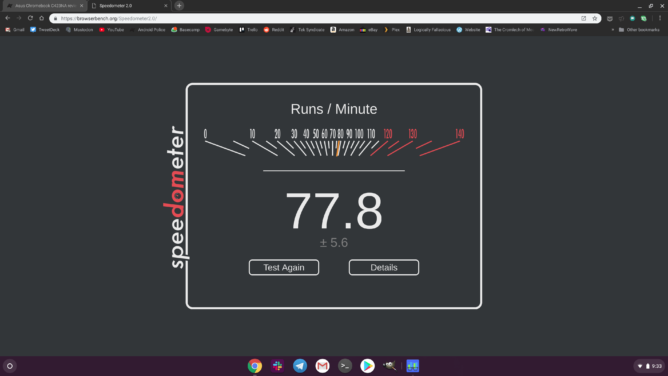 With ten to twelve Chrome tabs, some alternate research open in Firefox, the Slack and Telegram Linux apps, GIMP, and Darktable all running at once, that's when I noticed the fans spin up. I was impressed. However, there were three instances of a hard lockup, where the laptop completely froze and required a hard restart. When these occurred, I had Linux applications open, so I'll chalk that up to something being a bit off.

Battery life, meanwhile, wasn't so great, as I expected given that this is a 4K laptop. Lenovo claims that you can get nine hours, and that's technically true. I did get through an entire workday with lots of stuff open and brightness set to a barely-visible 30% and I ran out of juice roughly about the nine-hour mark. So, sure, that's possible. If you'd like to see some of the stuff on your display, then you can expect anywhere from five to eight hours depending on what you're doing and where you have your brightness set. Pushing it all the way to 100% while watching videos or streaming Steam games netted me about three, but that's a fairly extreme case. 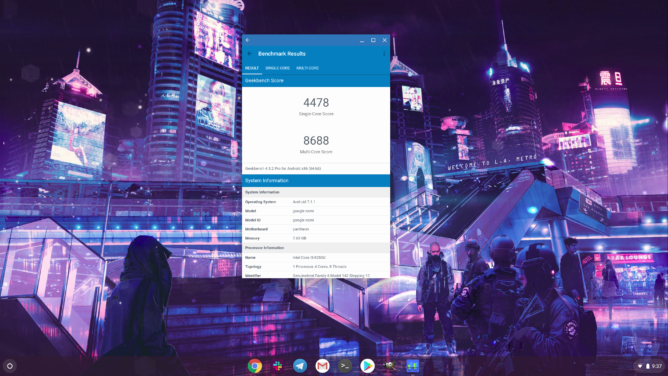 Standby time is also not bad. I left the Chromebook at 100% battery on my dining room table all weekend while I worked on some other projects. When I opened it up four days later, I had 11% left. Considering that I've used laptops that barely last two days on standby, that's decent.

Not unless you really, really need 4K on a Chromebook. I think the high resolution will be lost on many people, especially since 4K content remains far less common than 1080p. 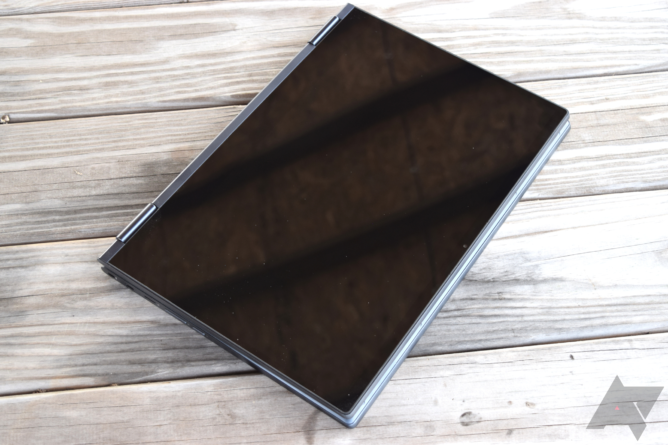 If, however, you want a large Chromebook that's powerful to do whatever it is you need to do, the Yoga Chromebook is a great fit for that role. There is a 1080p version that's otherwise the exact same as this model, but it costs a bit less and you'll get much better battery life.

Assuming that you're dead set on this variant, you're still going to get an impressive Chromebook. For $899.99 – though, it's on sale for an impressively low $629.99 directly from Lenovo (with coupon code PRESIDENT10) at time of writing – you'll have a machine that performs extremely well, even with those random lockups I encountered. Battery life is a bummer, but I don't think anyone expects a 4K laptop to last forever and this one surprised me under certain circumstances. It's not all that bad, just not good enough to get me through the work day/load I need a laptop to survive through.

Regardless of which configuration you go with, the Yoga Chromebook is a capable, but hefty machine. It's also one of the best premium Chromebooks out there, especially for people who want the larger display.

[Update: Coming to older phones] Rejoice: The Galaxy S10's Bixby button can be remapped out of ...