The amount of misinformation we're seeing is almost shocking, and it's primarily due to inaccurate information on Samsung's own website. Many people who've pre-ordered S10s are panicking about their orders showing 6GB of RAM, when they had purchased their phones based on the 8GB figure. We've even seen some allegations of bait-and-switch against Samsung on reddit.

Looking at the specifications tab on various S10 models' product pages, it's no surprise that many are scratching their heads. For instance, Samsung lists 6GB of RAM for both 128GB and 512GB models of the Galaxy S10. For the S10+, the site shows 6GB of RAM for 128GB carrier models, but 8GB for the 128GB unlocked model. All 512GB S10+ variants are shown with 8GB of RAM, which is actually correct. Lastly, carrier S10+ 1TB models are shown with 12GB of RAM, but the unlocked S10+ 1TB is said to have only 8GB. None of this makes any sense at all. 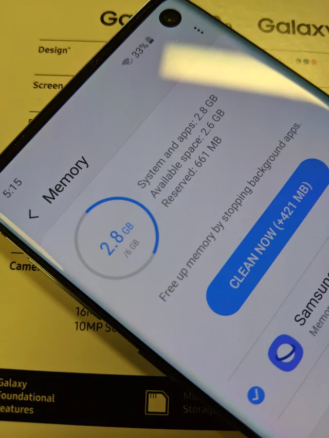 If you thought the messed-up website specs were bad, it turns out that some actual phones are showing the incorrect RAM amounts. A photo posted to reddit's r/galaxys10 subreddit by /u/Curly_umbrella shows an S10's 'Memory' tab in settings saying 6GB of RAM, and an AT&T store manager who emailed us also said that his floor models are showing 6GB in settings. We're dumbfounded as to how actual phones could be showing the wrong RAM amounts, but there's photographic proof above.

So here's what you need to know: All Galaxy S10 and S10+ phones have at least 8GB of RAM, regardless of which carrier or unlocked model you get. Samsung's website gets nearly everything wrong, but a Samsung rep informed us that it will be getting corrected. That said, we're still not sure why some display models are showing 6GB of RAM. The only S10/S10+ model that doesn't have 8GB of RAM is the 1TB S10+ model, which has 12GB of RAM (again, regardless of carrier/unlocked model).

Now that that's cleared up, go ahead and order your S10 or S10+ without worrying about receiving one with a mere 6GB of RAM in the mail.

OK, so Samsung swears that all Galaxy S10 phones, regardless of carrier or storage configuration, will arrive with 8GB of RAM. So why the heck are so many people providing some very convincing photographic evidence of 6GB units?

We reached out to Samsung in the hopes of clearing that up, but the manufacturer has declined to respond.

The company did, however, reiterate what we were told before: All Galaxy S10 phones will ship with 8GB of RAM, and the S10+ will either have 8GB or 12GB, depending on storage capacity. The only new handset with 6GB of RAM is the Galaxy S10e.

So while we wish we had a more satisfying explanation for those 6GB pics, the takeaway here is that you should feel confident that any GS10 you pre-order will land with at least 8GB of RAM.

Samsung is offering up to 40% off for students and teachers, including 8% off Galaxy S10 lineup