If you've followed our coverage, then you're probably familiar with Google's fairly recent digital health-conscious feature, Digital Wellbeing. If you aren't, it's basically a clone of Apple's Screen Time, allowing you to better manage app use and visualize your habits — ideally so you can place limits in the name of self-improvement. It has its own extra tools like Wind Down Mode, which turn the display grayscale at night as a nudge to use your phone less, and Flip To Shhh (which is probably self-explanatory). Digital Wellbeing also serves as a shortcut for other older features like Do Not Disturb and app notification management, so in addition to having the means to visualize how you use your phone, you've got the tools to change that.

Digital Wellbeing may be less than a year old, but it's come a long way from last year's early beta release. Now it's left beta, we've got features from it on Assistant-powered speakers, and it has expanded from just Pixels to piles of Android One devices running Pie, as well as the S10. 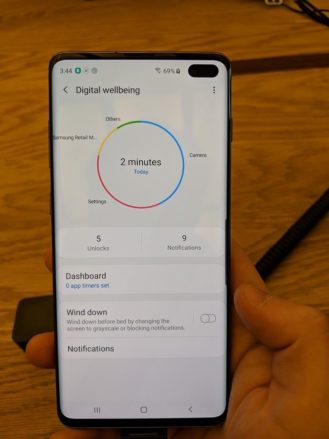 The presence of Digital Wellbeing on the S10 was first spotted by the folks at XDA Developers, while the Nokia deets come courtesy of Nokia Power User. Although it seems some features may have been missing from the pre-release software included on at least some review units, we can confirm it is also present on ours.

Unless my memory deceives me, the Galaxy S10 marks the first time a heavily skinned (I.e., non-Pixel/Android One) phone has picked up Digital Wellbeing. Although Samsung's phone may have the feature from launch, both the Nokia 6 and 8 snagged the feature as part of their recent updates to Android 9 Pie. The Nokia 6 isn't an Android One device, either, marking another handset to break the mold.

Hopefully, Digital Wellbeing spreads to even more phones in the future — it's good for consumers to have more options and tools, especially when it comes to managing our time. There's only so much of it.

Google I/O registration opens, apply before February 27th and you might get to spend $1,150 on ...