A new version of Gboard hit last night and it appears to be taking a second run at enabling the clipboard that began going live a few months ago. Unfortunately, there are still some problems. Gboard is also taking a run at adding a feature to help your friends and family enable additional languages on their devices, and a tool for exporting your personal dictionary. And as usual, there are dozens of new languages supported for people from around the world. 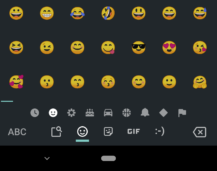 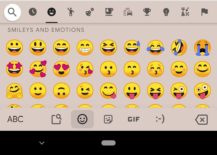 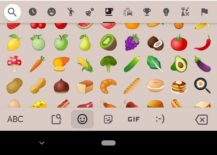 Reports have come in a few times about an alternate layout for the emoji keyboard. The new arrangement places the category icons from the bottom of the list up to the top and spreads them out to fill the entire width of the screen. The emoji themselves are also enlarged to fill in the blank space between each other.

Like many other features in Gboard, this is rolling out somewhat randomly at this time. I still don't have it, but it seems to be hitting more people than the last time it appeared. We'll have to wait to see whether it continues to roll out to everybody or reverts back to the old look again. There are some other similar tests that bring visual tweaks to this portion of the keyboard, so you may see some other changes popping up.

We've seen months of development on a clipboard manager feature, and for a very brief stint, it was even live for a few users before vanishing again. Now it looks like things are starting up again as the v8.0 update begins relaunching the clipboard manager, but things may have to turn around again. 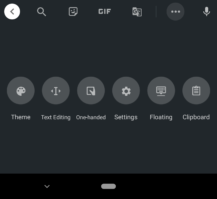 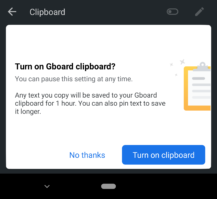 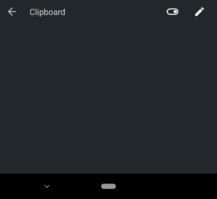 To find the clipboard feature, hit the little arrow at the far left of the row of suggestions, then hit the overflow button on the right side of the menu that appears, then you'll find the clipboard icon in the group below. Like all of those items, you can long-press and drag to move them into the main list of items above. Tap on the clipboard and you should get the welcome card. 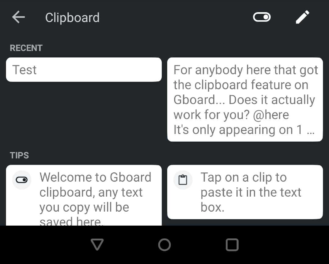 The clipboard will keep any recently copied piece of text in its memory for one hour. You just have to open it with the steps above — again, you can drag it into that menu bar for faster access — and you just have to tap on a clip to paste it into your current application. Clips can also be preserved for longer by pinning them, which can be done by hitting the pencil icon in the corner.

If you turned on the clipboard and decide that you don't want it on anymore, just open it up and tap the little toggle next to the pencil icon to turn it off. 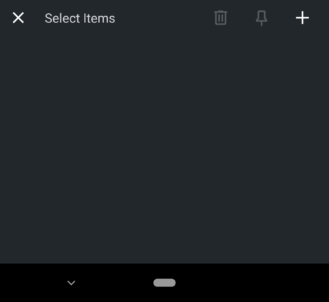 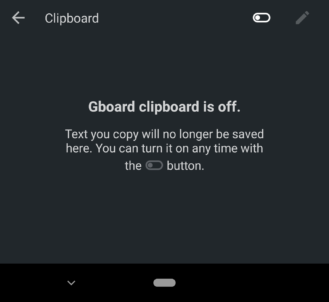 This all sounds great, but unfortunately, it's not working for a lot of people. For starters, a lot of devices simply won't have the clipboard feature yet because Gboard uses staged rollouts to enable it, and there's often a delay of a few minutes to several hours even if your device is chosen to get it.

However, the bigger issue is that the clipboard is broken for a lot of users. While it can be opened, clips never actually appear in the list, nor can they be added manually. Various tricks like force closing or restarting the device don't help either. I haven't been able to pin down a definite reason the clipboard works on some devices and not others. It doesn't appear to be linked to any particular OS version, OEM, or geography, so maybe there's a link to some other installed software, or just an entirely random bug. We can probably expect to see an update rolling out in the next few days that fixes the issue for the rest of us.

Gboard is working on an interesting new twist for a classic promotional feature. We're all used to the idea of apps that encourage you to share them with other people. Most of these offer nothing more than a convenient way to spit out a link to download the app and a short promotional message, and Gboard will basically do the same on the surface, but it will be doing a bit more than that.

The message Gboard crafts will read like this (with whichever languages you're using):

I'm using Gboard to type in English and German. You can try it at: https://gboard.app.goo.gl/(something)

For users without Gboard installed, the link will probably direct them to the Play Store (or the App Store on an iOS device) where they can download Gboard.

What makes this special if the recipient already has Gboard installed. Tapping the link will redirect users back to Gboard where they will be invited to enable the languages mentioned in the message.

Now, you might be wondering why this is special. The short answer is that this makes it easy for users to help friends and family turn on more languages.

For those that aren't technically proficient, Gboard's settings aren't very easy to find. If somebody didn't already know they could get there by long-pressing the comma (,) button, or through the app drawer (assuming Gboard isn't hidden), the only other place to look is in a phone's Settings app. While that will eventually lead to the right place, it's still very unintuitive; and once you do find Gboard's settings, enabling a new language can also be a little complicated.

Basically, imagine talking to your technologically-challenged multilingual parents. You could go through explaining step-by-step how to get to the right screen and turn on a new language and hope they don't get mixed up along the way... Or you could open Gboard and send a single message, tell them to tap a link and then confirm the languages they should add.

If you've ever considered switching away from Gboard, or perhaps you're just trying to make some backups, you might have been a little agitated that your personal dictionary was locked inside of the app. Short of manually copying every entry one-by-one, there wasn't much else you could do. A new line of text suggests there will be an export function added that will make it possible to get the data out for use elsewhere.

This may or may not really be done, given that there's no sign of an import function. In all likelihood, this is going to become a tool for moving shortcuts lists between phones in cases that automatic sync can't be used, or for sharing shortcuts with other people, and both of those scenarios necessitate some type of import function. We'll be keeping an eye out for more.

[Update: G7 Power too] Motorola releases Pie kernel code for the P30 Note and G6 Plus