Devices running Android One are expected to receive software updates frequently and over an extended timeframe. Among them are Nokia's phones, which started to receive Pie back in September. The brand's update roadmap also confirmed all handsets released after 2017 would follow by the end of Q2. The two-year-old Nokia 6 was due to receive Android 9 Pie in March, but Juho Sarvikas, Chief Product Officer at HMD, tweeted the upgrade is rolling out a few weeks ahead of schedule.

Keeping up with our promise of 2 years of Android updates, Nokia 6 (2017) is now officially running on Android 9, Pie 💪! Nokia phones get smarter over time. pic.twitter.com/50aLqColh7

In addition to bringing all the goodies from the Android 9 update, software version 6.12H comes with the February Security Patch and weighs 1.7GB. It's great to see a phone released in 2017 receive the latest Android version, after already being updated to Oreo last year. I have to admit I'm a little jealous, as I'm still waiting for my S9 to receive its share of the Pie... 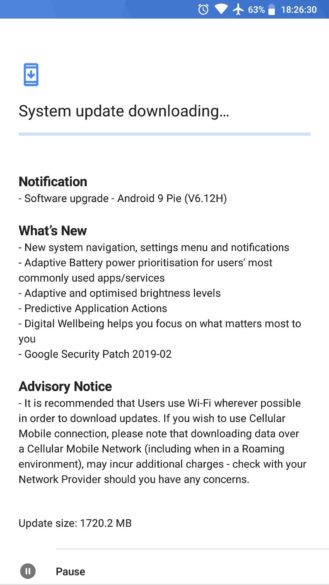