In what will surely be a boon to Chromebook-related productivity, you can now make individual folders and files in your Google Drive available offline on Chrome OS, but only on V73 and later. That's Beta Channel and forward, at the time of writing.

The new "available offline" setting appears only via the right-click menu in the file view section of the Chrome OS file manager. Right clicking in the tree view to the left doesn't give present you with the same options, which is a bit odd. 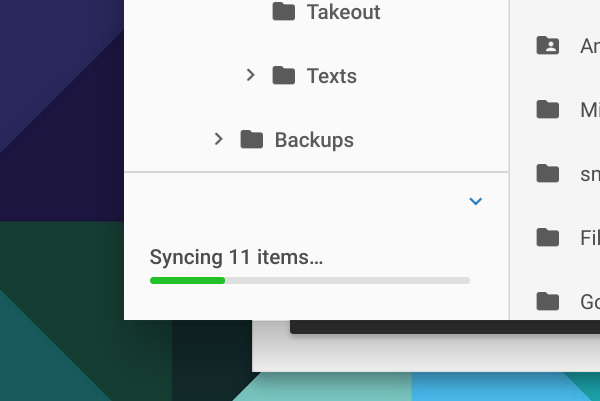 If the files are large enough, you'll get a progress indicator to let you know when they've finished syncing to your device. 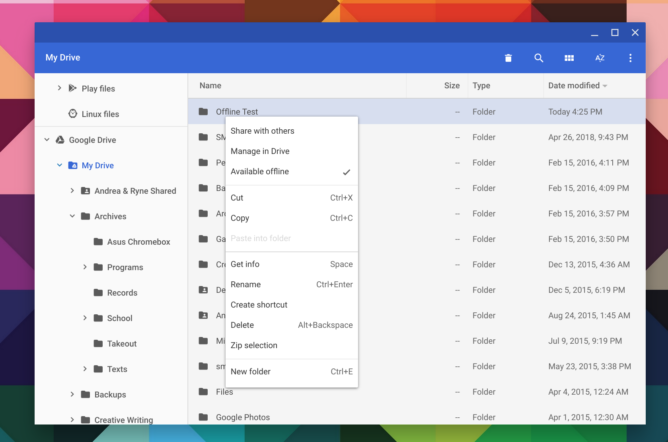 Once a folder or a file has been downloaded and made available offline, the option in the right-click dialog menu gets a little check mark next to it, though the icon itself doesn't change. A new "Offline" section will also appear all the way at the bottom of the Google Drive section of the tree navigational view in that left pane, showing all the offline folders and files in a single location. 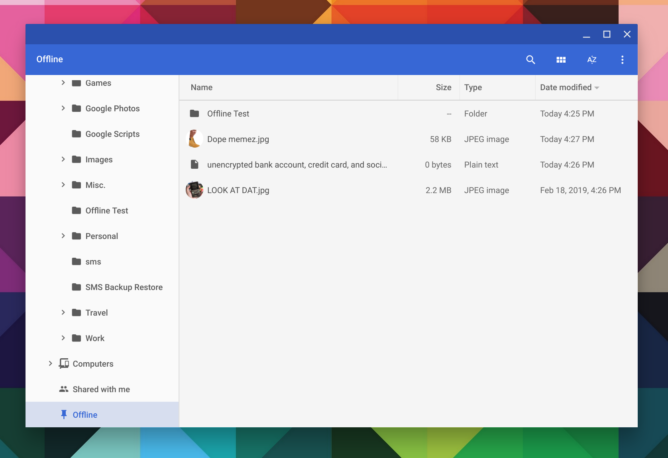 Files that are added to a folder marked for offline use at a later time will also be marked offline, so the setting is inclusive of all sub-folders and files when applied to a folder. However, if you attempt to change the contents of an offline folder, you'll need to do so at its location in the Google Drive section of the tree view. Changing files from the "Offline" section of the file manager isn't possible; they can't be moved, modified or deleted from there. They can be modified while offline, you'll just have to do it from their actual location in the tree view outside the "Offline" section.

Furthermore, in my tests some file types in specific circumstances can't be accessed offline, even if set to be. Although I was able to open images stored in an offline folder while offline, attempting to open a Google Doc text file stored in an offline folder that hadn't been previously opened on the device just pointed me to an error message in a tab. YMMV, this is in the Beta Channel, after all.

The current implementation on Chrome OS seems a bit limited compared to offline use on, say, a Windows device via the (ridiculously buggy) Backup and Sync client. It remains to be seen if more robust integration is planned, but it's better than nothing if you need to access files offline from a Chromebook.

Nike's self-lacing kicks turn to bricks when updated over Android