While the first 5G smartphones won't even be on the market for months, Qualcomm isn't wasting any time announcing its next-generation 5G modem (yes, already), the Snapdragon X55. The X55 is, basically, going to be the first globally viable 5G modem on the market when it begins shipping at the end of 2019, because it's the first one to support all the various known incarnations of 5G and offer 4G LTE, 3G, 2G, and CDMA in a single chip.

Stronger and faster together: LTE and 5G on one chip 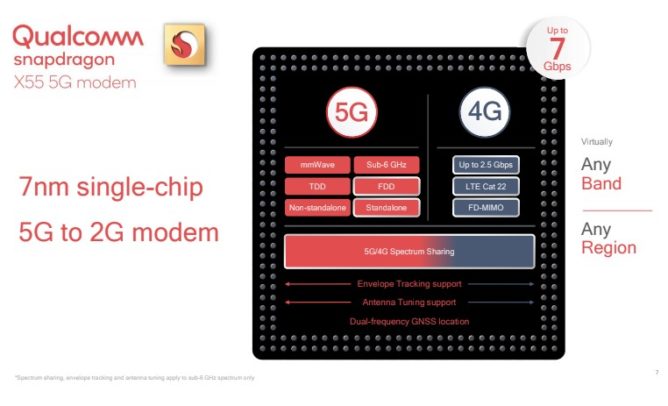 Unlike the Snapdragon X50, the X55 is fully integrated with legacy network connectivity on the modem, and Qualcomm believes it will not only be the best 5G modem you can get, but the very best 4G one as well, with peak LTE speeds of 2.5Gbps. The Snapdragon X50 relies on a second Snapdragon X24 modem for LTE connectivity (kind of like the first LTE phones). 5G speeds on this new modem are theoretically even more impressive, with Qualcomm claiming a maximum of 7Gbps on the downlink and 3Gbps on the uplink.

I once again want to highlight the in theory part of this, because we really have no good sense yet as to how commercial 5G networks will perform in the real world. After all, we've been promised gigabit LTE for years, and nobody outside a highly-controlled network test setting is achieving those kinds of speeds. Speeds, though, really aren't the big story. 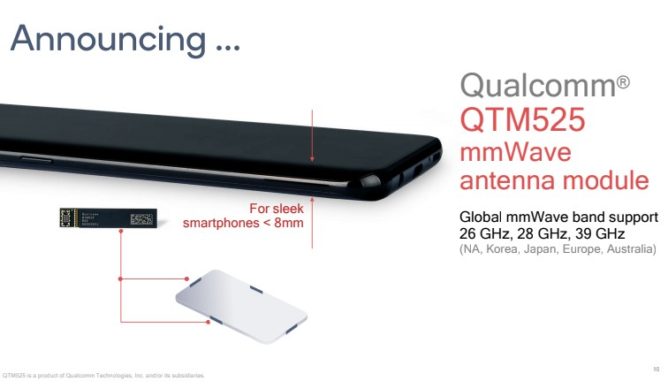 The X55 will be sold alongside a new antenna module (QTM525) that substantially decreases the thickness requirements for a proper mmWave 5G smartphone, with Qualcomm stating that designs under 8mm will be possible. The current antenna solution that will be used in Snapdragon X50 5G phones is thicker, though Qualcomm wasn't really keen on managing expectations as for how thick those phones will be, other than to point to a Samsung prototype shown off during its Tech Summit event in Hawaii. That phone wasn't especially thin, but it wasn't super chunky or anything, either.

5G gets global, but not for a while yet

On the technical side, the important thing to know about X55 is that it enables a far, far larger ecosystem of 5G smartphones to be developed. That's because the X55 works with sub-6GHz FDD 5G networks; the X50 does not. T-Mobile will be launching 5G on a primarily sub-6GHz FDD network, so this is important in the US, too. The X55 also adds support for more global coverage, as it has the capability to run on 5G SA (5G standalone), and works on the n258 26GHz band that will be popular in places like Europe. The X50 didn't have any of this, and there's a good reason for that I'll get to shortly.

Qualcomm says the first X55 smartphones won't land until 2020. Realistically, though, you won't see them out in force for over a year, because this modem will almost certainly be tied at the hip to Qualcomm's next-generation Snapdragon SoC. Those chips have historically been announced in December and go on sale in late Q1 of the next year. 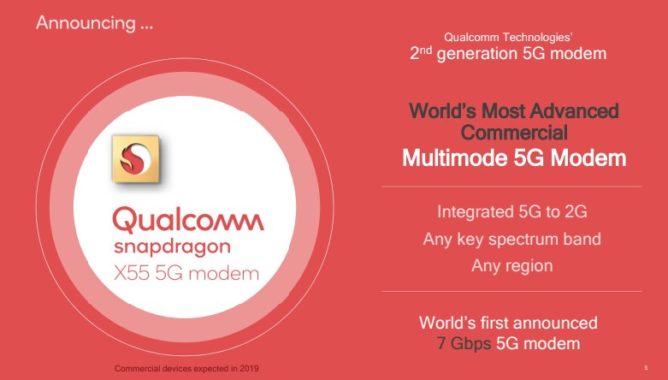 Understandably, you're probably wondering "why have the X50 at all if the X55 does all this stuff better without needing two separate modems? Couldn't 5G wait until 2020?" Which is exactly what I asked Qualcomm. The answer, once you get through the layers of marketing, seems to come down to two things. Number one is that Qualcomm needed a fully-developed platform to test 5G - and specifically millimeter wave - on phones in the field, and creating a commercial product was the best way to do that. Number two is the carriers (the sense I get is that translates to 'Verizon and AT&T'), who are demanding that manufacturers start rolling out 5G phones to coincide with the launch of their 5G mobile networks this year.

You have to remember, Verizon and AT&T are engaged in a massive and extremely expensive race to deploy 5G mmWave, and the first carrier with a viable 5G phone in 2019 gets all the 5G bragging rights. Verizon and AT&T really are the economic force pushing 5G into being A Thing in 2019 versus 2020, and both are probably willing to subsidize much of the cost of developing carrier-exclusive 5G phones (as was the case with LTE). Since these networks will be mmWave-only 5G at launch, there was no immediate need for a fully-integrated 5G/4G modem, and no need for sub-6GHz 5G support.

All in all, I really do take this to mean that buying a Snapdragon X50 phone is probably not a very good idea - unless you know you live in a mmWave market for AT&T or Verizon this year. The X55 will bring far better 5G network intercompatibility (I don't know if we'll see unlocked 5G phones in the US next year, but maybe) and probably will have worked out some of the bugs carriers and OEMs discover in these first-generation 5G devices.

Qualcomm's pace of innovation remains impressive, but I do feel this sort of makes it look like they're tripping over themselves to be able to announce "FIRST" in response to everything related to 5G. While Qualcomm says - and is correct - that the X55 aligns with the cadence of their modem announcements (the X50 was announced a year ago), you can't help but notice that the first 5G phones aren't even out yet and Qualcomm's already talking about the second generation. Which, if you ask me, is the one you should probably wait to buy - at the earliest.

Giveaway: Win one of two Command Bars from Polk Audio [US]