Early adopters are used to dealing with bugs (or they should be), but once in a while a hidden problem can trickle down into stable, though rarely are they so funny as this. Some folks are running into issues with Chrome OS Stable v72 and later releases, resulting in crazy high CPU use. The twist? This problem only occurs in very particular, self-fulfilling circumstances: while you have the task manager open.

The issue was first reported on by Chrome Unboxed, and it's tough to tell how widespread it is; anecdotally, my Pixelbook on V72 isn't affected, but reports are widespread. Although the vast majority of comments on the associated entry in the Chromium Bug Tracker implicate the Pixelbook, other comments there and elsewhere indicate that the Pixel Slate, Samsung Chromebook Pro/Plus V2, and HP Chromebook X2 are also affected — potentially among a larger list of devices. 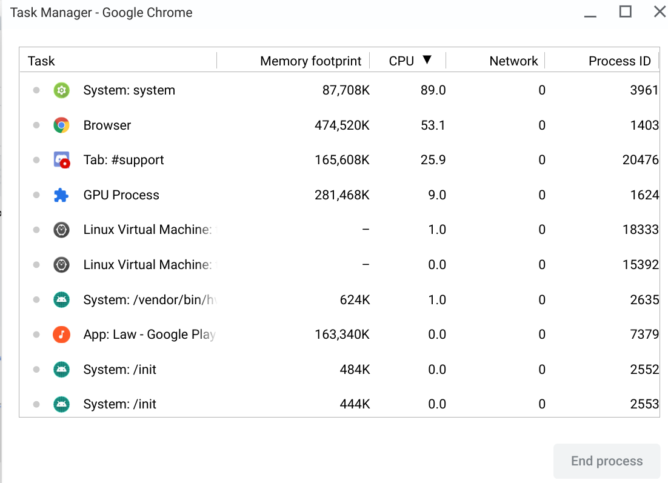 Task manager on an affected device, note the high CPU usage by "system:system." Image via /u/WPWoodJr.

The problem initially sounded pretty severe, with the Chromebook's system_server/system:system process consuming from 50% to 100% of CPU usage on some devices, resulting in palpable and unusual lag in general use. Disabling Android app support seemed to fix it for those affected, and some pointed the blame at the Android 9 Pie update included with Chrome OS v72 and later versions.

However, both later reports and some investigative efforts by folks at the Chromium team indicate that the issue may be exaggerated by (if not outright caused by) the system monitor itself. I.e., CPU usage is only spiking to these high numbers when the CPU/task monitor is open — though there may still be another bug at play for Chromebook users with enterprise management enabled.

If you're among those affected, it appears Google's well underway in identifying and resolving the root cause of the issue. The apparent lead developer examining the bug has even rescinded his call for additional feedback, so it sounds like they've got things under control.

In the meantime, try not to open the task manager if your Chromebook is running V72 or later. As the old joke goes: "Doctor, it hurts when I do this." "Then don't do that."