Lenovo's C330 picked up AP's Most Wanted award last year when we reviewed it for plenty of good reasons. Sure, you aren't getting a 4K screen, quad-core Intel CPU, or 16GB of RAM, but Lenovo managed to cut precisely the right corners to hit what we considered an incredible price. Not many cheap Chromebooks come with an IPS screen, solid build quality, or such a pleasant touchpad. And right now the bigger 64GB version is marked down to just $220 at Amazon, B&H, and Newegg. That's $80 off MSRP and $30 off recent prices. 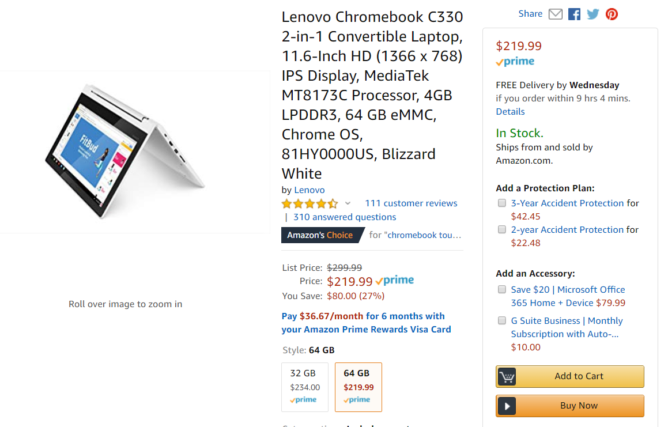 The Chromebook packs in 4GB of RAM, 64GB of storage, a quad-core MediaTek SoC (MTK8173C ), 11.6" 720p IPS display, 2x2 802.11ac Wi-Fi, a 45Wh battery rated for 10 hours, and it even has a USB Type-C port for charging. That 64GB might seem like a bit much when it comes to a Chromebook, but you should remember that this plays nice with Android apps, and that extra space goes a long way if you plan on filling it up with some. It even has Linux support now.

Now, as a budget Chromebook, you shouldn't expect this to compete with higher-end devices like Google's Pixelbook. The MediaTek SoC isn't going to wow you, the keyboard was just a bit too shallow for my tastes, and the display is dim and 720p — not the most impressive PPI for an 11.6" display. Still, at $220 it's a great deal. 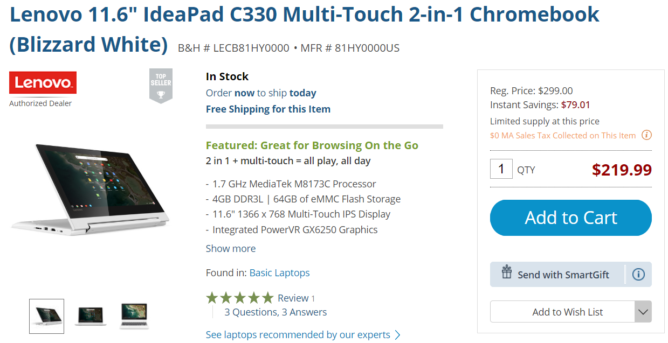 We've seen the C330 cheaper at $180 last year, but that was for the 32GB model, not this upgraded 64GB SKU. As one of the few Chromebooks here at Android Police that's earned our Most Wanted award, we feel confident in recommending Lenovo's C330, especially at a mere $220. Whether you want a cheap laptop for the kitchen and coffee table or something basic for your kids or grandparents, this is a good price for a good choice.

That was short-lived. If you didn't manage to snag one, the opportunity has expired, though I wouldn't be surprised to see it or the 32GB version go on sale again soon.