We would love for USB-C to be as ubiquitous as possible, and to avoid using USB-A and MicroUSB cables and ports, but the truth of the matter is that we're still in a transition phase where smartphones have adopted the standard, computers are moving in that direction, and accessories are still (generally) lagging behind. If you have multiple devices that can charge over USB-C, a hub that only provides one C port isn't ideal. But those with two ports or more are still a rarity.

Aukey had the PA-Y6, but it turned out to be not up to spec; ZeroLemon and Scoche have some options, but their low output makes them less ideal for charging laptops; and Anker just announced the 100W PowerPort Atom PD 4, but it's not yet available and should cost about $100 when it does come to market. If you're in a hurry to get a charging hub, or if you don't need something as powerful or as expensive as Anker's, Satechi's new 75W dual USB-C stands firmly as a good middle-ground at $70.

I have been using it for a bit, but I don't have Ryne's tools or experience to provide a detailed analysis and review, so consider this as a more casual hands-on.

Satechi announced this travel charger earlier at CES. It's a follow-up to the hub that Ryne reviewed last year and uses the same body, design, and features, save for one change. Instead of the USB-A QC 3.0 port, there's a second USB-C PD port. The charger still outputs a maximum of 75W, with the main C port capable of up to 60W, the second one up to 18W, and the two USB-A 3.0 ports rated for 5V/2.4A (12W max). When you're using both type-C ports simultaneously, the main one will drop to about 40-45W to accommodate the second. 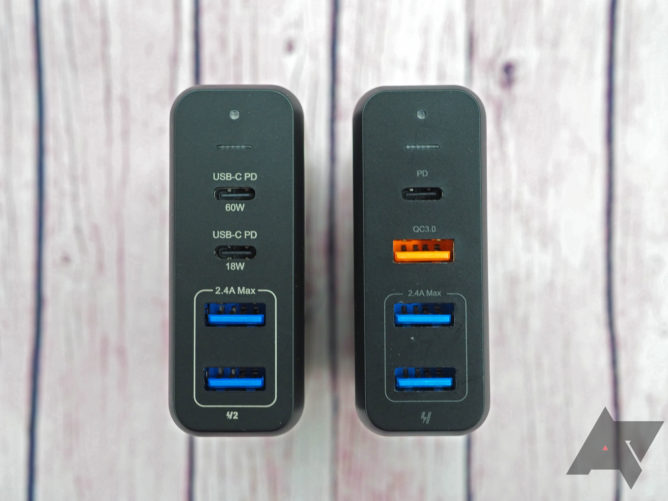 The build quality is still the same as the previous model: black plastic on one side with all the ports, space gray paint all around, and a two-pin female 110-240V connector for power input on the back. The front still has the light sensor that Ryne liked on the original, which controls the blue LED's brightness and avoids blinding you at night. 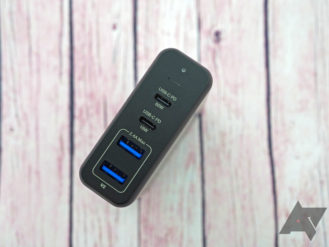 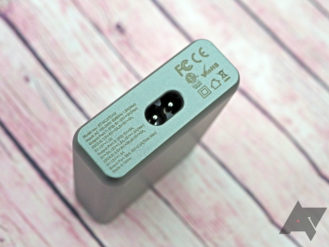 You can order the charger with either a US cable plug or a UK one. Both will work in any country, though you may need an adapter if you travel to Europe for example. There's nothing else in the box though, beside a small user manual, so you'll have to provide all the cables yourself. 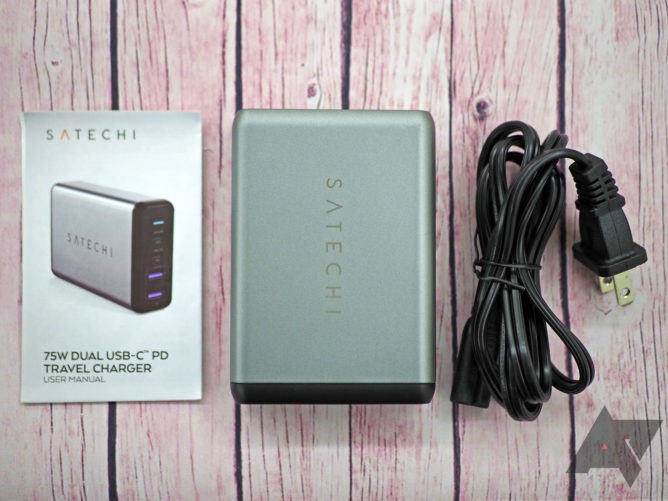 For the couple of weeks that I've had this charger, I've used it to charge my Pixelbook, Pixel 2 XL, and a couple of accessories (Bose SoundSport Wireless, Skagen Falster smartwatch, and some power banks). Since I don't have any computer capable of pulling 60W of power, I can't test the maximum output on the 60W USB-C port. What I can say though is that my Pixelbook was able to get up to 15V/2.9A out of it (i.e. 43.5W, which is quite near the 45W maximum that the Pixelbook can charge at) while my Pixel 2 XL was charging on the second type-C port and the two other ports were also in use. For my needs, that's more than enough. 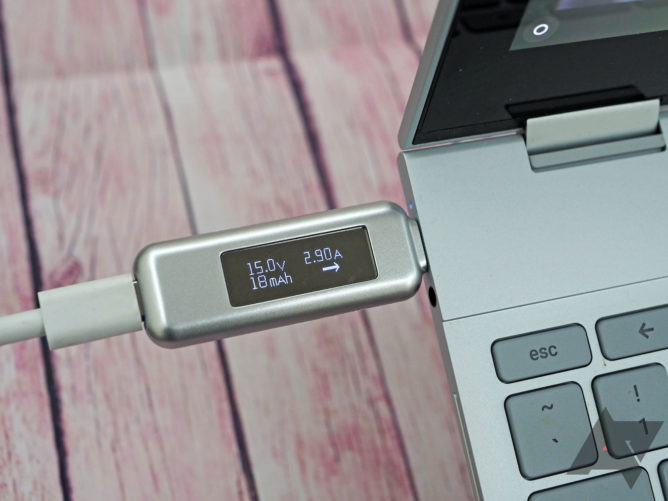 Over the past few months, Satechi's older 75W charger has been my trusty charging hub for travel and weekend trips. It was one of the first things my husband and I packed for our vacations and handled our phones, a power bank, and whichever headphones happened to be depleted on a given day. When we were going somewhere more work-oriented, it also served us well for charging the Pixelbook. The differences between that older model and the new one aren't that big, but having two C ports means I have to worry less about unearthing some A-to-C cables.

This hub isn't ideal for everyone though. If you don't have a notebook that charges over USB-C or if you don't usually fill up several devices simultaneously, it is a bit overkill. On the other end of the spectrum, if you need more ports or if your laptop can draw much more power, the 60W port may be a little too slow for your liking and would even get slower when you use the second Type-C port. You're better off waiting for Anker's 100W PowerPort PD 4 instead.

However, if none of those apply to you and you're in the market for a charging hub for your bedside table, office, backpack, or for travel, this is a great option. It is a little more expensive than the previous Satechi hub ($70 vs $60), but $10 isn't much to pay for a more modern version that keeps up with the higher demand for USB-C.