I will never change my opinion when it comes to the headphone jack: Taking it away was a terrible, consumer-unfriendly decision. Thanks to Google, Essential, OnePlus, and other OEMs, that means I have to work a bit harder to accommodate new devices into my firmly, happily tangled life, and one of the most annoying sacrifices up until now was using my phone in the car. The standalone Android Auto app actually works great just on your phone's screen, but having to choose between charging and audio was a major bummer.

Thanks to Moshi's power/3.5mm splitter dongle, that's not an issue for me anymore. 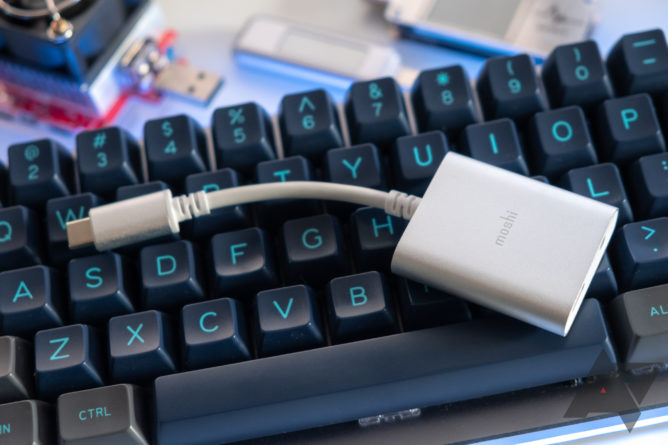 Moshi's "USB-C Digital Audio Adapter With Charging" has a terribly long name — which I'm not going to use in full again — and an understated design. One end has a male USB Type-C plug set into a thick white rubber plug, itself stuffed into a silver-colored, rounded aluminum enclosure. A beefy white rubber grommet connects it to a cable that goes to the dongly end. 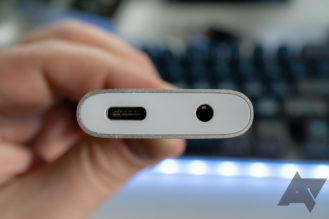 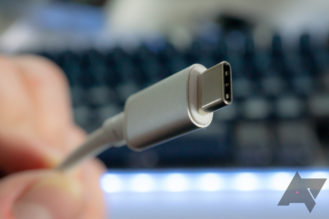 This side is also encased in a matching, much larger silver aluminum shell, with white plastic rather than rubber faces. It has two ports: one USB Type-C (power only) and a 3.5mm headphone jack.

The packaging includes "made for Google" branding that indicates this is a product tested to meet compatibility standards with Google products (i.e., it shouldn't fry your Pixel when you plug it in or break  spec). 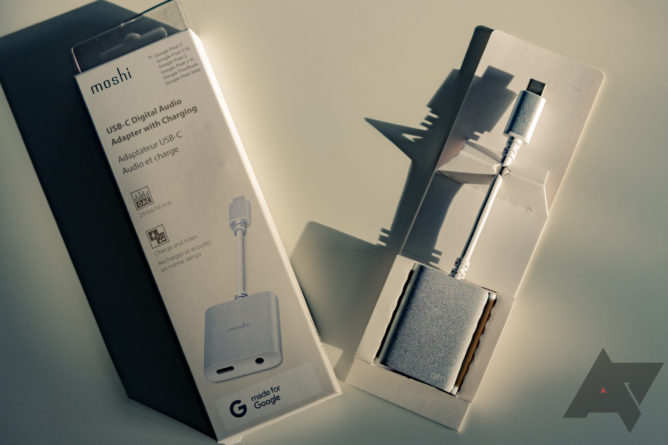 All that is included in the box is a paper tray which holds the dongle; there are no extra cables or cords provided.

How well does it work?

Last year there were rumors and individual reviews reporting problems with Moshi's adapter. Paired with its lack of availability, I had assumed the worst going into this, but my fears were unfounded. This 2nd generation version of Moshi's Type-C Audio Adapter is excellent. Sound quality is on par with the best Type-C headphone dongles I've used, and easily meets the experience of built-in jacks on older phones.

I didn't experience any static or volume issues, as I have on some other Type-C headphone dongles/DACs, and in anecdotal use with headphones and stereos, it sounded generally good. Headphone controls like volume up, down, and play/pause work, and the microphone on my Xiaomi Hybrid Pros had no issue. So far as I can tell, no functionality has been lost.

General quality was easy enough to test, but my 2nd biggest concern was that Moshi would have to cut down how much power could be passed through to the device. Thankfully, again, that wasn't a concern. It supports up to 15V and 2A — you could probably use this with a laptop if you needed to.

I should note that it didn't work with my MacBook Pro, but my Pixelbook and Surface Go had no problems. Although reviews on Amazon seem to note issues with the Pixel 3 when it comes to charging speeds, I had none. It's possible some vendors are still selling the older version of the dongle. The adapter worked with most of the phones I tried it with. OnePlus phones before the 6T did not play nice, and the 6T's behavior was sometimes erratic, only accepting charging or audio (and randomly neither), but not both. 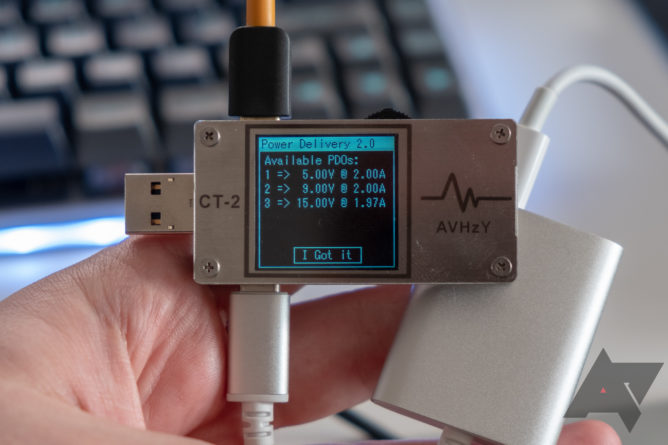 Although it's rated as providing PD 3.0 compatibility, my tester only measured 2.0 compatibility — not that the differences in this application really matter, they're mostly about providing extra info between devices. A table of supported voltage and amperage combinations is below:

The only disadvantage is that the Type-C port can only provide power, attempting to use OTG storage hardware or other devices with it didn't work in my tests. For some niche uses that might be a bummer, but if you're picking this up to use in, say, a car, then it won't be any impediment.

Yes. The price is a bit steep at $40, but if you'd rather not deal with the issues of Bluetooth audio in your car, or if you really need to charge while listening to stuff on a headphone jack-less device, it's an okay price for the slight luxury, though it won't work with every Type-C equipped device. YMMV.

I get in my car to drive less than once a month, but when I go on longer trips, having to choose between power and audio sucks. Even for me, with my sparse use, I'd pick one of these up in a heartbeat just to make my life easier on beer runs to Vermont. I'd probably have preferred cheaper materials and a subsequently cheaper cost, but as someone who hates the issues that come with Bluetooth audio — especially when it comes to Google's Pixels — it's really nice not having to deal with it in the car.

If I don't have to choose between charging and Spotify on long drives, I'll happily spend $40 and consider it a bargain. Not everyone will feel the same, but for those that do, Moshi's Type-C Audio Adapter/splitter/whatever you wanna call it is a godsend. 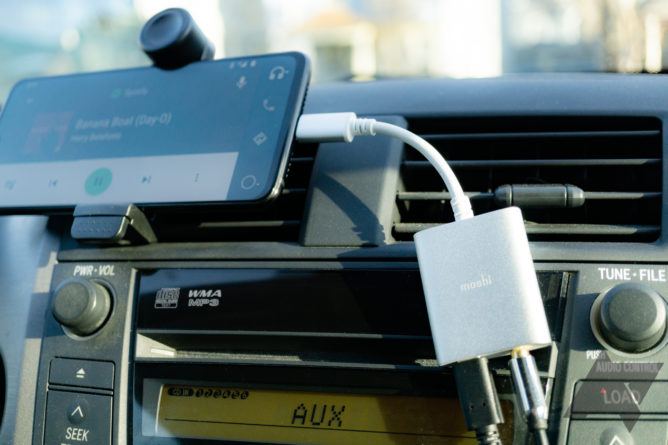 You can purchase Moshi's 3.5mm/Type-C charging dongle for around $40 (at the time of writing) at the retailers below:

Losing Cast support could be the final nail in BeyondPod's coffin