Arlo announced the Arlo Ultra 4K camera system late last year, and we got a closer look at the cameras during CES in January. Arlo needed a hit after a disappointing fourth quarter, but the Ultra cameras aren't off to a great start. Best Buy has apparently halted sales of the cameras following negative reviews and customer complaints.

Like past Arlo cameras, the Ultra is entirely wireless. You can mount the cameras wherever is convenient without worrying about running power cables. They connect to the included hub, which links up to your network over ethernet. The cameras are supposed to wake up and record activity in glorious 4K video, but many early reviews on Best Buy point to connectivity issues. The Arlo Ultra is once again listed as "Coming soon" or "Pre-order" on Best Buy with an average rating of 2.5 stars. 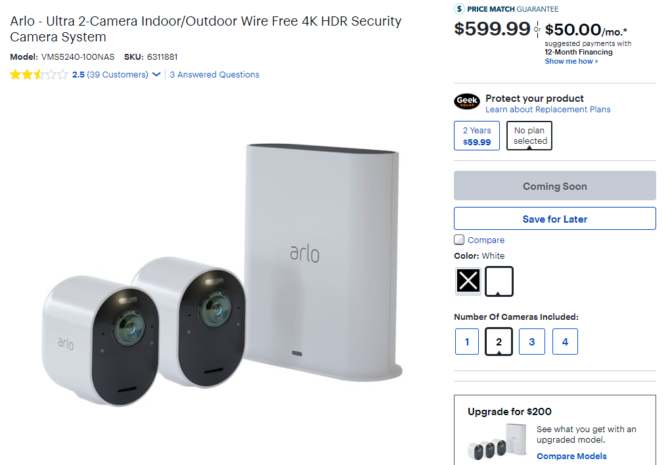 Separately, the Arlo Ultra cameras don't seem to tolerate inclement weather very well. As you can see below, they get blurry in the rain. Some Arlo Pro 2 owners reported similar issues (I never did), but the issues seem even more severe for the Ultra.

Been rainy/misty here the past 24 hours….looks like the Arlo Ultras don’t have any kind of lens coating to fight off the moisture. All camera views are like this, even under the porch. Don’t remember the Pro 2 having this issue. Not cool. pic.twitter.com/6XqIo23GWW

Oh, the cameras can also look very purple. That's probably thanks to a stuck IR filter.

Arlo Ultra is something of a mixed bag. When it works, it's amazing. When it doesn't work, the camera isn't found or the video is... PURPLE. Early adoption is a job hazard. https://t.co/Auhea545dC pic.twitter.com/oDiD78nMeJ

Arlo has issued a statement, which you can read below.

As we do with all our products and knowing that Ultra is a leading technology product with a lot of new innovations, we did extensive testing before deployment.  After end-user sales began, we found some performance challenges in certain user environments and have been releasing firmware upgrades to solve these challenges. We feel we have largely solved the issue, and are now seeing positive feedback on the forums from users in these environments.

Unfortunately, this statement seems at odds with reality. The Best Buy site won't sell you the Arlo Ultra, and we've checked multiple stores to see if there are any on shelves—there aren't. So, you can't buy the Ultra at all right now as Best Buy was the exclusive launch partner.

Arlo is asking $600 for the 2-camera bundle. That's a lot of money to pay for home security cameras even if they work perfectly. We're also getting a better idea of how Arlo plans to monetize the Ultra, and it's not a great setup. The Ultra won't have free 7-day recording like the Pro cameras. Plus, you only get 1080p video with the standard subscription. You have to add a premium video plan for each camera if you want 4K video. Arlo wasn't clear about this prior to the launch.

Pausing sales might staunch the flow of negative reviews, but pre-orders are still stacking up at retailers like Amazon. Arlo doesn't have too long to get this sorted out.

Alternate title: Arlo Ultra cameras aren't bursting into flames, and that's about the only thing going right with their release

Google might be building a smartwatch, according to new job listing