Android Q news is starting to arrive bit by bit, largely due to an early AOSP build that's been doing the rounds. Probably the most welcome enhancement — other than the much-anticipated system-wide dark mode — is an overhaul to the privacy and permissions settings.

Thanks to our friends at XDA Developers, we now know a little bit more about what to expect.

We already learned that the next big version update could prevent background apps from reading your clipboard, although background location access could return. It's okay though, as you'll be notified by a status bar icon if an app is using your location, camera, or microphone. Clicking on the icons will also bring up a dialog. Additionally, you'll be reminded with a notification that you've granted always-on access to an app for location services. Android Q is also getting a brand-new permission called 'Financial Apps SMS Access' for banking transactions.

A new UI on each individual permissions page stands to make it easier to see which apps are allowed to use it and which have had access denied. Right now it's a long list with different toggles. There's also a new subpage for each entry with some additional usage information, which could come in very handy. Detailed permissions usage is presented with pretty bar charts and generally nicely laid out. When running legacy apps (those that target an API level below 23), Android Q will ask you to approve or deny all relevant permissions the first time you start them.

A new feature called 'Roles' was touched upon in XDA's recent hands-on video. It looks to be a replacement for the 'Default apps' options, but there's a bit more to it than that. There are hints that suggest the service will be able to allow certain permissions based on which role it's assigned, which will allow users to give roles to certain apps and not worry about granting associated permissions.

When you sideload an app in Pie, the package installer will pop-up with a full-screen UI to ask if you are sure you want to install. That's changing to a smaller, central dialog that doesn't waste so much space as before. 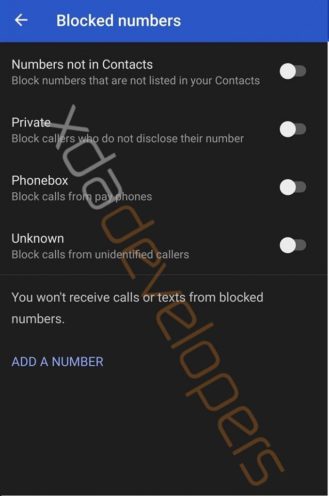 In a move that will be welcomed by anyone who deals with multiple spam calls per day, the AOSP dialer app in Q lets you block numbers that are unknown, private, pay phone, or just not in your contact list. The Google Phone dialer is expected to get this too. Finally, it's been noted that every installed app now shows up in the AOSP launcher's app drawer, although this may well be a bug — time will tell.