In today's world of constantly sending messages on whatever platform you've chosen, you're bound to make a mistake (or several). Whether that's sending something to the wrong person or later regretting that little outburst, there's something to be said for the ability to unsend that message. Now, Facebook is implementing an undo send feature into Messenger.

We heard about this a while ago, but now Facebook is rolling it out starting today. Officially called Remove for Everyone, the feature allows you ten minutes to reconsider and fix your error. The recipient(s) will see a text alert letting them know that something has been deleted. You still have the option to remove the message from your view, if you, for whatever reason, want to do that. 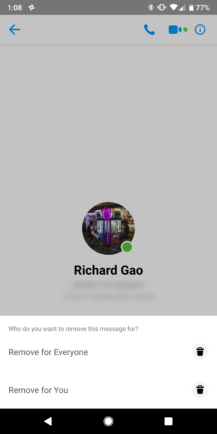 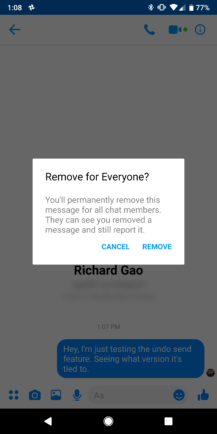 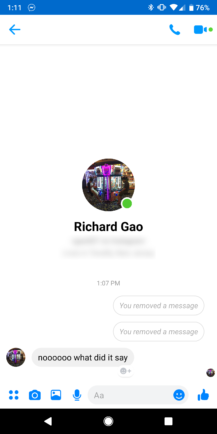 Facebook says this is available for everyone on iOS and Android running the latest Messenger. I tested both the version I installed from the Play Store and the beta we have over on APK Mirror, and the Remove for Everyone option was there. Keep in mind, however, that the recipient(s) can still see and read the message(s) you unsent via the notification that they receive, so you're not totally saved from shame or regret just yet.

Moment is raising its prices, but here's a coupon to get some cases and lenses at their old prices

All roads lead to Gmail: Google is shutting down the classic Tasks web UI