The main cause for a raised eyebrow is that outer screen, which Samsung officially calls the "cover display." The one in the video, which has since been taken down from Samsung Vietnam's YouTube account (but not from other channels that have uploaded "backups" for posterity), is much larger than the one we saw when Samsung gave the world a dim look at a demo version of the foldable phone housed in a box back in early November. That device's cover display was quite tiny compared with the one we see in the teaser video, which nearly fills out the front of the phone. 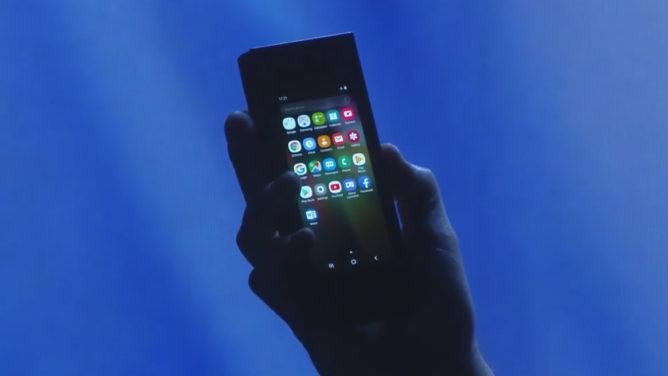 The cover display on Samsung's foldable phone, as seen in November 2018.

Add to this the fact that the video comprises a mix of current hardware (Galaxy Note 9) and concept technology (a gesture-controlled mirror and an attachment that turns a Note 9 into an ultrasound device, among others), and there's good reason to consider the foldable phone seen here as part of the latter group. So, yes, rein in your expectations when it comes to just how polished Samsung's functional (but probably not market ready) foldable phone will look when it's expected to be unveiled alongside the Galaxy S10 at the company's Unpacked event on February 20th in San Francisco.

And if you're curious, we've been told that the Vietnamese text at the end of the video roughly translates to: "Innovations we've created today so you can make a difference tomorrow."

As Marcelo notes in a comment below, Samsung has uploaded the English version of the video to its official YouTube channel today. Here it is: