Move over, notch. 2019 is all about 5G and foldable screens — the two buzzwords we keep hearing at every event, with every major announcement, and in every teaser. Not knowing which one to pick, Huawei seems to have decided on landing a double-punch by teasing the world's "first" 5G smartphone with a foldable display, to be revealed at MWC in Barcelona.

The teaser happened at the very end of Huawei Mobile's 5G launch event in Beijing today. Richard Yu, CEO of the company's Consumer Business Group, said this: "We look forward to seeing you in Barcelona in February, where we will launch the world's first 5G smartphones with foldable screen." You can hear it for yourself in the video below, which I've conveniently set to the correct time.

I don't speak Mandarin so I'm relying on the live translation, plus I'm a little skeptic about the plural in "smartphones." But from the smiles and applause that followed, it seems that Huawei is poised to really launch its own take on the foldable smartphone next month. It will also be using its new Balong 5000 5G chip. 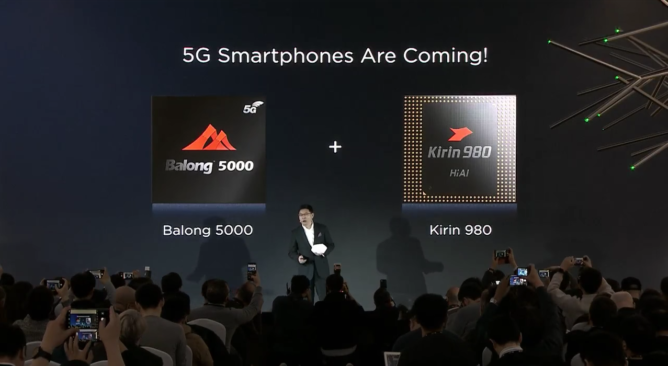 After seeing proof-of-concepts of folding displays for years now, and hearing rumors of Samsung's device for just as long, we're finally reaching the point where these news sound less like hullaballoos and more like legit upcoming devices. With teasers from Samsung, Lenovo, Xiaomi, and now Huawei, this year's MWC event should be about folding displays left, right, and down the middle.

Huawei has posted a teaser of the phone on Twitter, with the caption, "Connecting the future." The image just shows the phone's bend, and no other details were revealed.

Come with us to explore #ConnectingTheFuture LIVE from #MWC @GSMA. Are you ready to reveal the unprecedented? #HuaweiMWC #MWC2019 pic.twitter.com/ErPD7eKMh1