Before today one of the playerbase's most wanted features for the mobile version of Fortnite was controller support. Well, it looks like the developers have been listening to the fans as the 7.30 update released today finally adds in support for bluetooth controllers, such as the Steelseries Stratus XL, Gamevice, Xbox One, Razer Raiju, and Moto Gamepad. And if the inclusion of this controller support isn't enough to float your boat, maybe the addition of 60Hz support for select Android models will pique your interest.

Having tested the new HID controller support over USB OTG with my trusty Logitech F310, I can say that it works just as well as it does on consoles or PC. So if you were worried that this update only supports bluetooth controllers, don't fret as the HID support covers both corded and wireless options. I had no issues using my controller whatsoever. All of my buttons worked correctly with no need to fiddle with their functionality, though you do have the option in the settings should you want to customize the default layout.

The addition of 60Hz support is also a very welcome feature in today's update, though only the Samsung Galaxy Note 9 (USA variant), Huawei Honor View 20, and Huawei Mate 20 X are currently supported. Hopefully, more devices will be added to the list in the future. 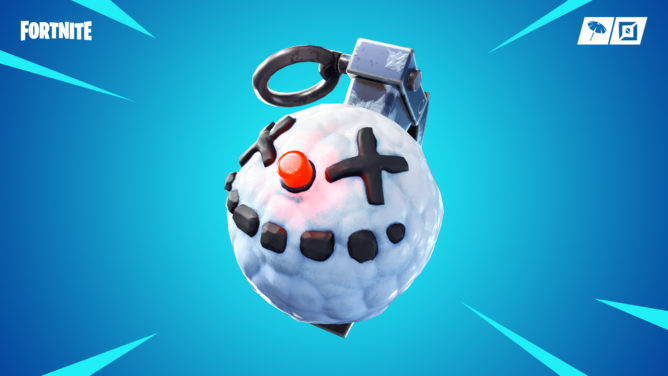 This new season-appropriate weapon is called the Chiller Grenade

Along with the inclusion of HID and 60Hz support players can also expect a new seasonal weapon called the Chiller Grenade that can knock back opponents and cause them to slide along the ground. Just keep in mind that you will have to be very careful with this weapon since it can also cause friendly fire and possibly take out your teammates. The Chiller Grenade can be found in vending machines and as floor loot.

Of course, there are even more new additions and changes expected in today's update, so if you're looking for the full changelog for the mobile version of Fortnite, check the list below.