As we get ready for MWC 2019, let's take a moment to reflect back on the phones of yesteryear and bask in their ever-falling prices. One of the more forgettable ones from 2018 was LG's G7, a capable device on its own merit despite its failure to amaze. Right now, Amazon and B&H are both selling the black model for $479.99, a nice $270 off the MSRP. 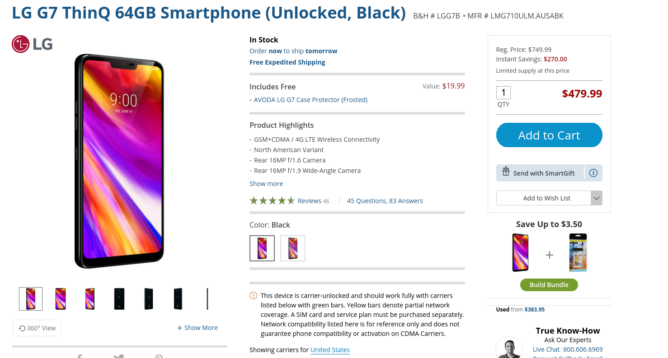 The G7 ThinQ, as it's properly called, bears a laughably stupid name, but top-tier 2018 specs all the same. The 6.1" QHD+ notched display is large and bright, the Snapdragon 845 powers through any task, and the quad DAC setup is sure to please anyone's ears. It's also unlocked and works on all U.S. carriers. Like most flagship devices, the G7 didn't launch with the most appealing pricetag, but that's what makes deals like this so much better.

This is better than the last time we saw this phone go on sale. Again, this deal is only good for the black G7 (though, the silver version is $20 more on B&H). It's not Prime-eligible over on Amazon, but B&H is throwing in a free clear case and free expedited shipping if you go that route. As always, I'll include links to both below.

Weekend poll: Where do you prefer to have your front-facing camera?

Samsung Electronics vows to use more environmentally sustainable packaging, including ...