It seems like every luxury brand has a Wear OS watch offering these days, and Louis Vuitton is one of them. According to Engadget, the designer has updated its Tambour Horizon watch with Qualcomm's new Snapdragon Wear 3100, as well as a handful of other improvements for the new year. 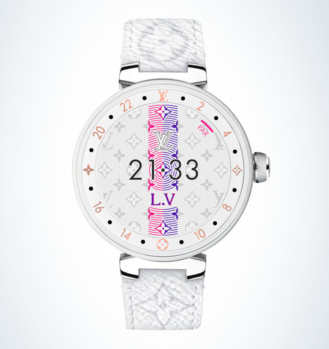 The highlight here is the Wear 3100, which puts battery life as its number-one priority. Louis Vuitton claims that the watch can now last for a full day (wow!) and six days in total if it's just being used to show time. Also mentioned is an upgraded screen, though no specifications are mentioned. The new watch will also have a ring around its rim that indicates whether it's day or night, and it'll be visible even in ambient mode.

Lastly, Louis Vuitton has also added a white ceramic option. No pricing or availability has been revealed — in fact, it doesn't look like Louis Vuitton itself has mentioned anything about the new watch — but for reference, the old model retailed for $2,490.

The new Louis Vuitton watches are now available for purchase (or more likely just gawking) on the company's online store. There are four models starting at a measly $2550 for the Monogram Eclipse and going up to $4450 for the Pure White. The other two models, Matte Black and Monogram Brown, sit around $3000. These prices are for the base model though, so expect to add one or two hundred dollars for an upgraded strap.

Chrome OS Instant Tethering is rolling out to non-Pixel phones