Back in 2015, Facebook wanted to simplify picture sharing by launching Moments, its own Google Photos rival. The concept was simple: you would upload files from your gallery to privately share them with friends, keeping them separate from your Facebook albums. Despite 50 million downloads on the Play Store alone, the social media giant has decided to kill its app and is urging users to save their photos.

Facebook has updated the app's changelog as well as started emailing users and displaying notifications in the app to warn of its upcoming death. People have until May to export their pictures using a dedicated site, on which they can download their moments or turn them into Facebook albums. Anything uploaded after February 25 won't be available for grabs, so we highly recommend you switch to an alternative solution, such as Google Photos, to avoid losing your files.

Moments is going away soon and will be removed from Google Play. This update makes it easy to export your photos and videos. You can also go directly to the Moments website to get started: facebook.com/moments_app/export 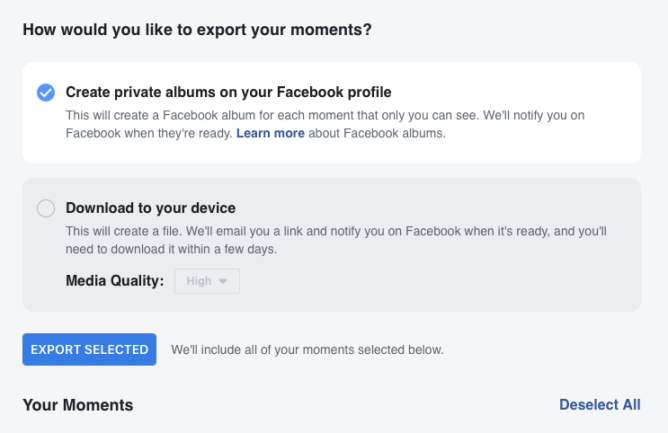 The Menlo Park giant hasn't shared usage insights for its app but said poor utilization rates led to its decision to shut it down. It's also fair to believe recent privacy issues haven't helped people trust Facebook with their private data, leading them to turn to other providers instead. US Samsung Galaxy S8, S8+, and Note 8 get treated to Android 9 Pie beta and One UI