Let me set the scene for you: You're hanging out with your friends, the night is winding down, someone wants to play some music. You've got a Chromecast hooked up to the stereo, but they don't have Spotify. It's alright, it's just one song, you think. "What do you wanna play?" Some Lady Gaga cover by a prolific jazz band. You queue it up on your phone to play. Whatever, right?

Now your entire Release Radar playlist is nothing but Scott Bradlee's Postmodern Jukebox.

It's a sad story and a viscous, near-inescapable cycle which severely damages the otherwise fantastic quality of Spotify's dynamic playlists. But, if a recent test is any indication, it won't be a problem forever. Thurrott has spotted a new feature that effectively allows you to block specific artists. Although initially pegged as an iOS-only test, Engadget has confirmed it's also showing up on Android. 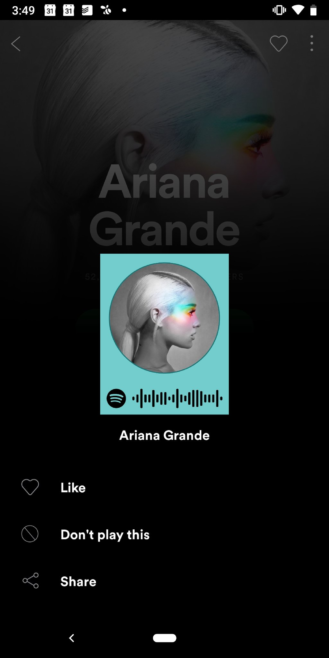 The new option seems to be alternately labeled "Don't play this" and "Don't play this artist" across Android and iOS, and it appears in Spotify's three-dot ellipsis menu for a given artist, visible above. When enabled, the setting blocks the artist's music from being played in curated, saved, and dynamically generated playlists, as well as charts, radio stations, and all other forms of playback. Even trying to open a song by the artist manually will be stopped, though it won't help if they're merely featured on another artist's track.

Thurrott noticed that Spotify's support continues to defend the company's previous decision not to include this feature, even as it appears to be testing it. While support representatives aren't always privy to details like these, it represents an about-face on the subject. 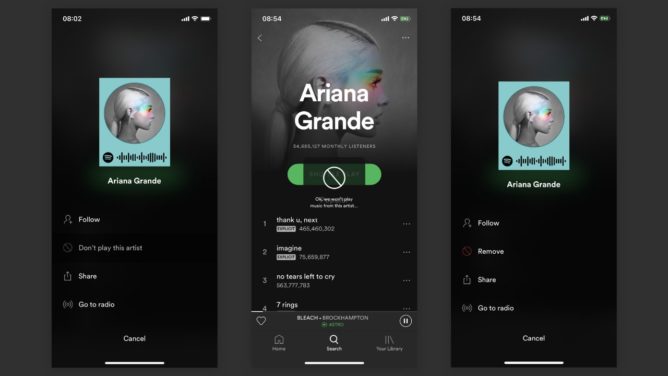 Gallery of the feature as it is enabled on iOS. Image src: Thurrott.

Assuming Spotify has changed its mind, it's likely in no small part due to the ongoing allegations against artists like R Kelly. It does sort of suck knowing that, if an artist pops up in an automated playlist and you don't catch it in time, that play gives them money — even if it's a minuscule amount. As someone who avoids purchasing products from companies with policies or politics I disagree with, blocking artists is a welcome move.

We don't know if the new option is appearing randomly as part of an A/B test — a move Spotify is known for — or if it's limited to the closed beta. Whatever the mechanism, I hope it rolls out to more people soon.