An update to Google's Duo app began rolling out earlier today, and unlike many other recent app updates, there's actually a brand new feature that doesn't appear to be locked behind a server-side switch. Unfortunately, it also appears that it may not be working properly, and might have been left enabled by accident. Duo is also preparing a special video effect in honor of Valentine's Day. 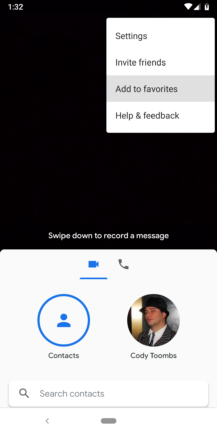 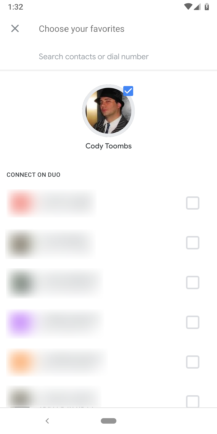 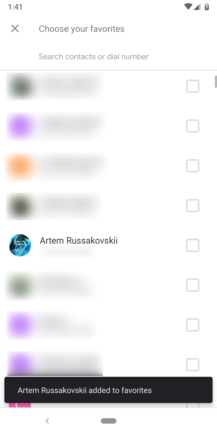 If you call more than a handful of people through Duo, your list of recent contacts might be overflowing. A solution for that is rolling out with v46 in the form of a Favorites list that you can edit to your liking, though it seems to be a bit buggy right now.

Hit the overflow menu at the top right and you'll see a new command titled "Add to favorites." This opens a contact picker with a list of favorite contacts at the top followed by your full contact list. There's also a search bar that can be used to narrow the list.

However, a bug seems to be preventing things from working as intended. When you try to add people that haven't been called from your device, a message pops up to confirm they've been added, but when you look at the top of the picker or return to the main screen, they're not there. You can obviously work around the bug by simply calling somebody, but that's not ideal when you're setting up a new phone or switching between phones regularly. I've filed a feedback report, so we'll probably see this fixed soon enough.

It's possible the Favorites feature wasn't intended to be live in this release. New text was also added that didn't appear when Duo launched, which might mean it was still in development.

We're just under a month away from the pinkest day of the year. The day chocolate and flower companies have been preparing for. The day restaurant reservations skyrocket. Yep, I'm talking about Valentine's Day.

If you won't be able to spend time with your significant other, you may still resort to a video call to keep in touch. To highlight the day, Duo is preparing a video effect to go with your romantic chit chat.

There are also a few other lines that bring up video effects without specifically referencing Valentine's Day. This naturally brings up the subject of video effects we've seen discussed in the past, including the Drishti effect and a bokeh-like portrait mode.

[Update: Sold out] Act fast: Samsung's wireless fast charger is a mere $24 as Amazon's Deal of ...