Don't kill my app! (DontKillMyApp.com) was recently launched with three main audiences in mind: Android phone manufacturers, users, and developers. First and foremost, the site takes to task OEMs that employ ham-fisted tactics to limit background processes in order to extend battery life on their phones.

Nokia is listed as the worst offender — in fact, Jiri Richter from the Urbandroid team said Nokia's emergence as a transgressor was the tipping point that pushed them to create Don't kill my app! in the first place. The site explains that HMD Global actually uses a sneaky "Battery protection" app (package: com.evenwell.powersaving.g3) in Android O and P to kill all background processes 20 minutes after the screen is turned off, alarm clocks and whitelisted apps be damned. OnePlus ranks second worst, followed by Xiaomi, Huawei, Meizu, Sony, Samsung, HTC, stock Android, and "Other vendors." 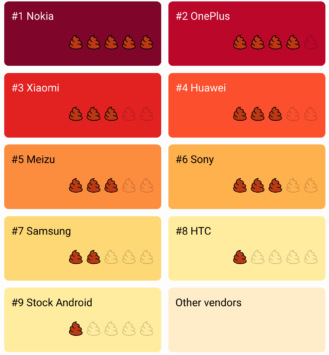 The pages for each OEM includes an explanation of how it limits background processes, as well as how users can take steps to fix the problem on their own, and what developers can do to help their cause, if anything. Don't kill my app! also shares a JSON API for developers to use in their sites and apps.

The website also serves as sort of a gentle blame-redirecting "ahem" from developers who are frustrated with clumsy OEM-specific background process limits and want users to know that vendors are likely to blame for their disappointment in apps that may not be performing as expected. It's already received a nice bump from outside the Urbandroid team: Joao Dias (joaomgcd), the guy behind Tasker, Join, and other apps, has voiced his support for Don't kill my app!

"People usually have to go through a lot of hoops to get stuff like Tasker to work in the background correctly and it always varies by vendor," Joao told Android Police. "It's a support nightmare trying to figure out all of the different procedures. This tries to centralize all the info."

Check out DontKillMyApp.com if you're interested in learning more about how Android OEMs handle limits on background processes. (And don't forget to toggle the different rating-scale graphics at the bottom of the site: Stalin, poo, thumbs-down, and Trojan horse.)

Every product with Amazon Alexa announced at CES 2019

Weekend Poll: Pick your favorite product from this year's CES