If you're on the lookout for a mid to high-end drone, have we got the deal for you. The DJI Mavic Pro, the company's old prosumer flagship drone, is currently on sale at B&H for an all-time low of $650 with a free pair of spare propellers. While we have seen comparable prices on refurbished Mavic Pros, it has never dropped this low on sale as a new drone with a complete manufacturer warranty. This deal ends at midnight ET, so you will have to hurry. 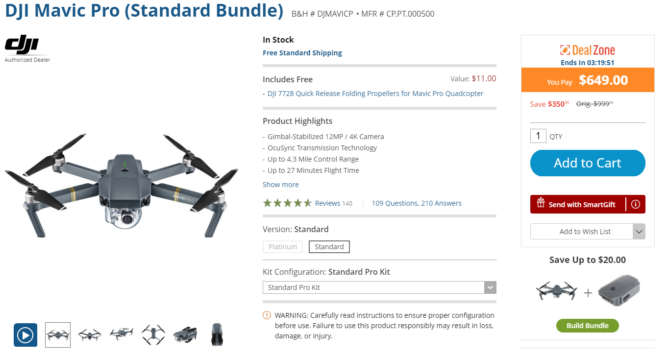 The Mavic Pro launched in 2016, taking the UAV world by storm. With its unique folding form factor, long battery life, and camera quality comparable to the bulky Phantom line, it sold so well that DJI waited over two years before updating it with the Mavic 2 lineup in the second half of 2018. While it may be two years old, the Mavic Pro is still very usable in 2019. You get a relatively compact drone that shoots stabilized 4K video footage, can capture RAW images, and has 27 minutes of battery life. The drone connects to the controller with DJI's proprietary OcuSync technology, which has a much better-quality connection than the Wi-Fi connection found on other drones like the Mavic Air and Spark.

That being said, the more recent Mavic Air is another option to consider. It's more compact than the Mavic Pro, has a few more Quick Shot modes like Asteroid, has better video quality (with a video bitrate of 100Mbps, as compared to 60Mbps on the Mavic Pro), has a more secure gimbal mechanism, and buying batteries and filters for it will be cheaper. If you wait for the right deal, it can be found for around $600.

Why then would anyone consider the Mavic Pro over the Air, one might ask? Four reasons: The Mavic Pro is noticeably quieter than Mavic Air, which has a particularly harsh buzzing sound. DJI also sells low-noise propellors that make flying the Mavic Pro even more unobtrusive. The OcuSync connectivity is so much better than the enhanced Wi-Fi on the Mavic Air, and that plays a very noticeable difference in everyday flying, where we are surrounded by a lot of wireless interference. If you're going to use DJI Goggles for VR, the experience on the Mavic Air is a lot poorer since it lacks OcuSync. Lastly, Mavic Air lacks some advanced features like Waypoints, which can be very useful for things like time-lapse projects.

You can pick the Mavic Pro up for $650 via the buy link below. The deal is only valid for around 2.5 more hours, so make up your mind quickly if you're interested.

The original deal went pumpkin-shaped at the stroke of midnight, as expected. But curiously, we noticed a second listing that still has the promotional pricing. There's no telling how long it might last, but it's an option if you're a few minutes late to the party.