Over the past few years, Nanoleaf has become the go-to source for a very particular kind of home decor: wall-mounted LED smart lights. It was only a matter of time before that industry started getting more crowded though, and thus we now have LaMetric Sky, a smaller version of Nanoleaf that differentiates itself by broadcasting information including social media counts, sales figures, and the weather.

The LaMetric Sky - which is on view at CES 2019, but hasn't got a launch date yet - offers up panels with 32 triangular patches of light. While a single set won't cover as much space as most Nanoleaf configurations, the size of the triangles does offer a pleasing, stained glass-like quality to the Sky creations. 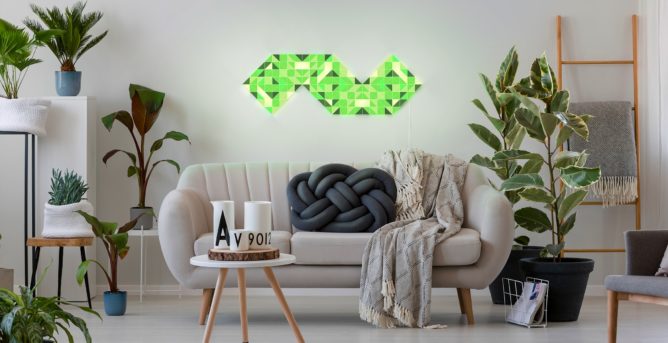 Like Nanoleaf panels, LaMetric Sky panels connect to Wi-Fi and are controlled via mobile app. In the app, users can create their own designs or choose from an option in the open-source library. The lights can also be controlled via Siri, Amazon Alexa, and Google Assistant, or through LaMetric's first product, Time (a Wi-Fi clock).

What's really interesting, though, is the data broadcasting function mentioned above, which puts Sky somewhere between Nanoleaf and products like Smiirl, a social media counter gizmo. As is possible with the LaMetric Time, users can create their own data sources, making it possible to get creative with the data they're throwing on the wall.

With the ability to broadcast live data and positive reports from CES bloggers, Sky might have a fighting chance of winning over some Nanoleaf buyers - that is, if it launches in a timely fashion, and at the right price. For now, there's no information on either of those important factors, so all we have is a (pretty) prototype.