Today Google is (finally!) announcing its rollout of real Assistant integration into Google Maps, though it was spotted in testing late last year, and announced at I/O. Gone are the days of limited voice controls in navigation. Soon we'll all be able to harness Google's full Assistant and all its enhanced functionality — from asking to play music, read/reply to messages, sharing Maps' ETA, and even add new stops on your way.

The change seems to be live on my phone, and I can report that tapping the mic icon in navigation mode brings up an Assistant's "listening" animation. (Tapping the icon in the normal Maps view still brings up the old TTS dialog, and it remains to be seen if that will change.) Commands asking to add a new stop on an existing route, play music, or send messages seem to work, but asking to share an ETA does not. It's possible not all of the new features have rolled out just yet. 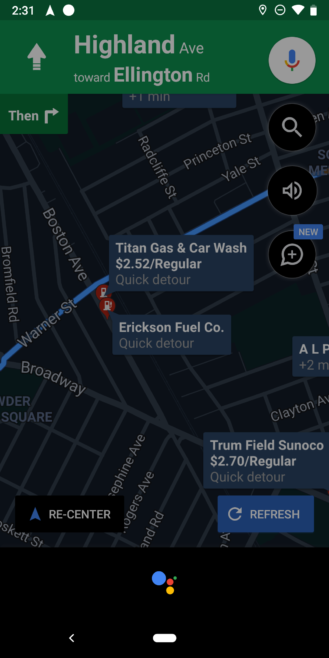 In its announcement for the new feature, Google reminds us that the Assistant works with SMS, WhatsApp, Messenger, Hangouts, Viber, Telegram, Android Messages, and other messaging apps.