Taking a page from Oppo and OnePlus or Huawei and Honor, Xiaomi seems ready to spin its Redmi line-up into a separate, independent brand. This wouldn't be a first for the company though, as it already has the standalone Poco brand as well.

Announcing a Redmi event for January 10 on its Weibo account, Xiaomi used the words "new independent brand Redmi." Later on, company CEO Lei Jun explained that the goal is focus: Xiaomi will maintain its high-end flagship Mi line-up, while Redmi will be tailored to value-for-money budget devices which are mostly sold through e-commerce sites. Poco, obviously, remains the affordable high-end brand.

Additionally, if you look at the shadow below the Redmi logo, you'll notice the numbers "48" teased. This falls in line with previous rumors that Redmi would launch a smartphone with a 48MP camera. After both Samsung and Sony announced their 48MP sensors last year, many companies are jumping on the opportunity to market such a ridiculous camera resolution. Huawei already announced its Honor View 20 and Nova 4, both of which tout 48MP rear cameras, and Redmi looks poised to follow suit.

We'll know more on January 10. Between this and CES, next week is sure going to be news-heavy. Oh hello, 2019!

Redmi is continuing to tease this new device. It has released a short video showcasing the durability of the glass body by letting people step and jump on it.

The phone's official poster has also leaked, showing the same design spotted in the video with the waterdrop notch, colorful backs, slightly tall chin, and text on the back that says "48MP AI dual camera." I don't know how numbers in China work, but it seems that the "4800" in the poster's text is just an indicator of the 48MP cam, and not of the battery capacity — which is rumored to be 3,900mAh  — like some of our readers theorized. 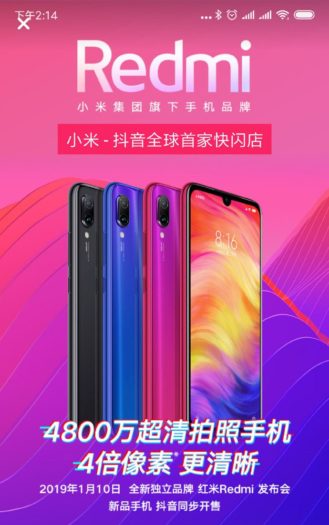