In what is likely to be the biggest low-key Android news today, Google seems to have silently flipped the switch (again) when it comes to the "check for update" button on Pixels. On every Pixel device we've tested here at Android Police, tapping the button in the Settings app is successfully pulling down the recent January update.

For a bit of perspective, OTA rollouts are usually pushed out to a smaller group before everyone else, to better ensure that a serious, undetected problem with a given update only affects a few people before it's caught. Nonetheless, those of us that rush into Settings to mash the update button on day one are usually willing to throw caution to the wind, and us early-adopters have lamented the inconvenience of either waiting or manually sideloading updates.

Google originally announced that the button would actually start to work all the way back in 2017. However, shortly after that reveal, the feature was apparently broken. At the time, Google's Elliott Hughes remarked that it would be fixed sometime in 2018. Now that it's 2019, it seems Google was finally able to fix it. 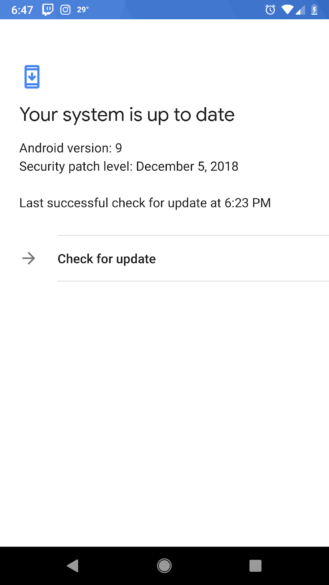 So far as we can tell, there has been no official announcement about this change, but all of our own Pixel phones have been able to snag the update via the "check for update" button manually, and our readers are universally reporting success in their own efforts.

Thanks for the fix, Google. This will actually make my job testing changes in functional updates a lot easier.

Qualcomm to power more than 30 5G mobile devices in 2019, most being smartphones