Ding-dong; the future's here! With smart-home technology making it more affordable than ever to outfit your domicile with everything from high-resolution, subject-identifying security cameras to wireless, effortlessly hooked up door and window sensors, who's really thinking about installing something as seemingly archaic as a doorbell and chime? We've already spent some time getting to to know Arlo's wireless camera systems, and I recently set out to see how that setup might be enhanced by the addition of the $80 Arlo Audio Doorbell and the $50 Arlo Chime.

Arlo give its users plenty of ways to add to their collection of smart-home gear, and loves nothing more than a good bundle. So while the Audio Doorbell and Chime are both available as stand-alone purchases, I checked out the Doorbell as part of a starter kit bundled with a pair of Pro 2 cameras and their base station. 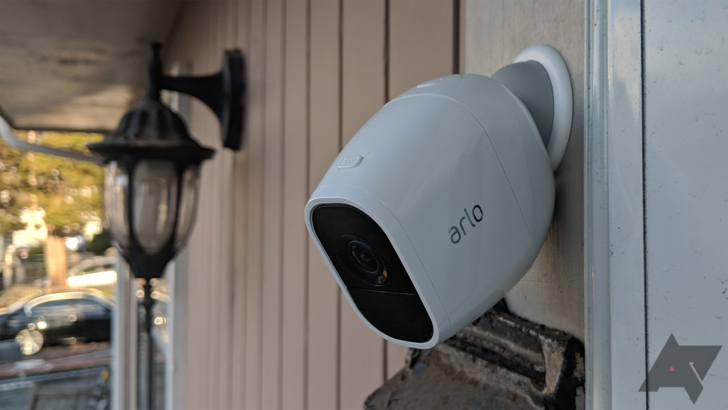 With no built-in camera, you'll need an Arlo cam to see who's ringing the Doorbell.

Setting up the cameras and their base is a relatively effortless process, and my experience went just about as smoothly as it did in our initial review. With them in place, and all populated in the Arlo app, it was time to add the Doorbell.

The unit itself is a bit more basic than something like the Nest Hello, as the the Audio Doorbell does not have its own internal camera; instead it relies on video from a nearby Arlo camera. Not every model is compatible, though, and the Doorbell won't work with the Go, Q, or Baby cams (which makes enough sense for those indoor units).

While there's no camera, the Doorbell does have its own speaker and microphone, as well as a motion sensor for detecting approaching guests. In addition to using that sensor to trigger actions like notifications or have an Arlo camera start recording, the motion sensor also prompts the circle around the Doorbell's button to pulse, letting visitors know where to press. 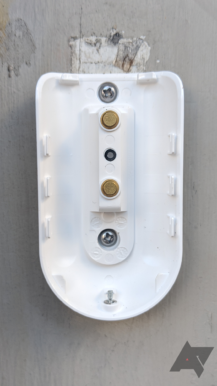 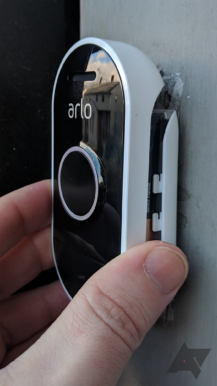 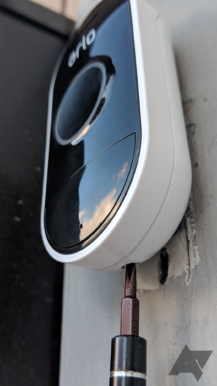 If you've got an existing chime, those metal contacts (left) will interface with your wiring.

Installation's achieved by first screwing the Doorbell's rear panel to your home's exterior wall. If you already had a wired doorbell (I did not), you can put it right over those exposed wires and connect Arlo's unit to your existing chime. Otherwise, find a fresh spot and screw it down. With that mounted, you've just got to pop a pair of AA batteries in the main Doorbell body, slide it into place on the mount, and tighten a small screw on the bottom to secure it. 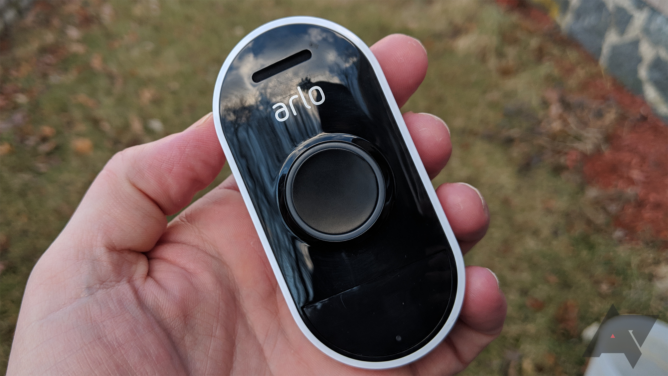 Physically, the Doorbell's attractive enough, and its simple design and and neutral colors shouldn't clash too much with your home's aesthetic. The oval design resembles a miniaturized Nest Hello, and the pulsing ring around its button is a nice touch — though I could do without the prominent "Arlo" branding. Maybe the weakest part of the hardware is the button itself, with neither enough travel, nor enough clicky, haptic feedback to make for a satisfying button-pressing experience.

The Arlo Chime, meanwhile, is even more straightforward to set up. Basically just a Wi-Fi connected speaker, all you have to do is unbox it and plug it into any convenient wall outlet. Then pair it in the Arlo app and you're good to go. This is nice in that it gives you a lot of freedom in positioning the Chime where it will best be heard, though its volume is sufficient that I had no issues hearing it from a floor away. 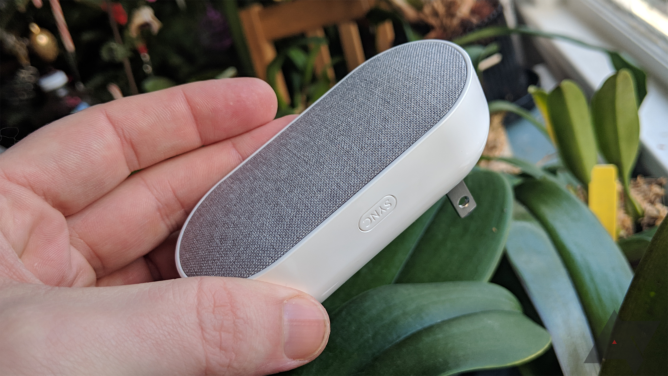 As you've probably picked up on by now, the hardware side of the Arlo Audio Doorbell and Chime is pretty basic: the Doorbell is a button, motion sensor, and speakerphone, while the Chime is just a speaker. So how well this all comes together as a product is going to depend hugely on the software connecting all the features.

The Arlo app makes the setup process very easy — you tap to add a device, select the product type, and follow the prompts on-screen. If everything works as it should, you won't even have to bother with any "sync" buttons, with the hub quickly detecting the newly powered-on accessories. You'll link the Chime and Doorbell to each other, and one of your Arlo cams to the Doorbell so you can see your guests.

Configuration options are minimal but effective. With the Doorbell you can set the motion sensor sensitivity, as well the default audio options for when a guest presses the button (letting you mute the speaker and/or mic). And with the Chime, you have your choice of — well, chimes — in addition to volume level.

While things ultimately work as advertised, there are a few hiccups along the way. Let's start with the simplest feature first: press button, hear chime.

As I mentioned before, the Doorbell's button itself isn't very satisfying, and I appreciate that there's audio feedback to let guests know it's working. When pressed, there can be a bit of a lag before the Chime inside goes off to announce your visitor. It's usually less than a second, but has taken upwards of a few on occasion. If you're using an existing wired chime this probably won't be an issue at all, and it's more frustrating from the visitor's than the homeowner's perspective. 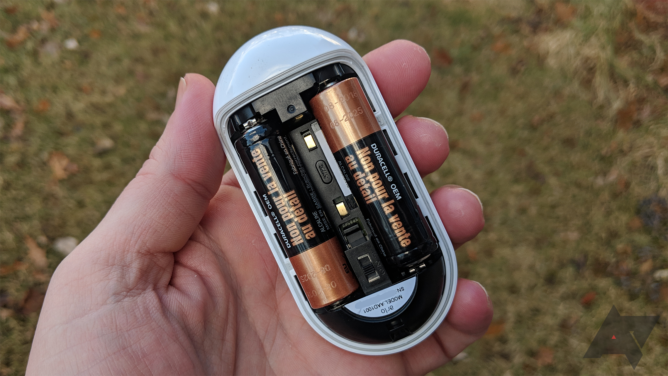 In that same vein, pressing the Doorbell's button over and over in quick succession won't deliver a frustrated cascade of tones from the Chime. Instead, it coolly plays its complete chime, waits a few seconds, and if the button's still being pressed, plays it again. For most people this is probably a welcome design decision, but I do wish there were some way to permit each button press to play a new chime, and let me hammer on that button to convey urgency.

In addition to signaling the Chime, pressing the Doorbell brings up what looks like a call screen on the Arlo app, prompting you whether to answer or dismiss. I really wish this screen of the app included the feed from your paired camera, or at least a still-shot, but you have to choose whether to answer before you can see who's there.

This seems to be what the app's mic-muting option is for: if you don't want to engage with your visitor you can answer the alert, bringing up a live video feed, but keep yourself muted for privacy. It's just odd to me that this requires answering first, and there's not a pre-answer screening step.

If you do elect do talk with your guest, the Doorbell's speakerphone hardware works well enough; the quality's not stellar, but it's definitely intelligible. If you decline to answer, the Doorbell will give your visitor a voice prompt that explains they should press the button again to leave a message. Though this works, I find it very odd that the Doorbell's speaker emits white noise while it's recording. I can't fathom why this might be, and an attentive guest may be confused as well, thinking that because it's making noise, recording has stopped.

You can also issue a number of pre-programmed responses if you'd like to tell someone to bug off, but don't feel like engaging personally.

I found the video from the Arlo Pro cams I used to normally be quite high quality — oddly, except when using the Doorbell. While my front-door cam would silently capture all the motion-activated footage I wanted it to without issue, once the Doorbell was rung quality sharply fell off, with stuttering, jerky performance. If I had to guess I'd suspect this is an issue with the camera trying to stream the Doorbell event to the app while also dealing with a motion-triggered record event, which I'd really expect the software to handle more gracefully.

It depends. This is a tricky one. Personally, I wouldn't pay $150 for a security camera in the first place, probably electing for something more affordable, wired, and without a cloud component over the effortless plug-and-play wireless Arlo ecosystem. So the idea of spending $80 on a doorbell (that doesn't even have its own camera) or $50 on a chime (with less functionality than a Home Mini but the same, if not a much higher price) is just crazy. 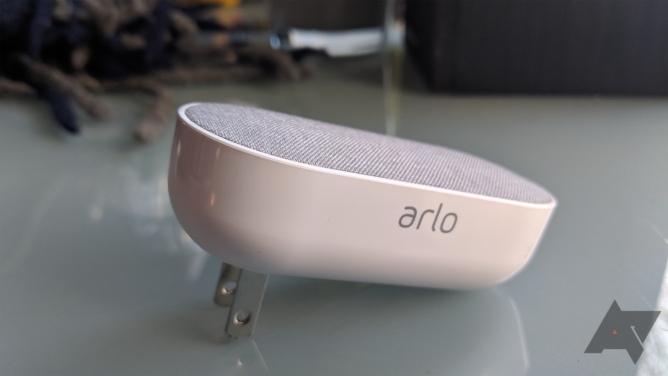 That said, if you're already dropping hundreds upon hundreds of dollars on Arlo cameras, this is a solution that adds some extra functionality to your system while integrating relatively nicely.

I think the easiest recommendation comes if you already have a wired doorbell; upgrading to the Arlo Audio Doorbell is quick and easy, can use your existing chime, and adds value to your cameras. The Chime feels like a slightly worse value than the Doorbell, and since you're already getting alerts though the app on your phone, may not even be necessary. Still, I see the appeal of being able to hear the Doorbell throughout your home.

I wish the Doorbell were rechargeable like Arlo's cameras, and based on my usage so far it seems like it will exhaust its AA batteries in maybe 6 months. That's not quite frequent enough to be a deal-breaker, but I still don't love the idea of consumables, and I may want to see how some NiMH rechargeables will fare.

If you can get a good deal on a bundle, or are already spending so much on cameras that the price of these extras is immaterial, the Arlo Audio Doorbell, and to a lesser extent the Chime, can help flesh out your smart-home system. But between the not-so-great value this hardware offers, and an app that's glitchy and occasionally unintuitive, definitely think twice before picking these guys up.