As well as offering simple light bulbs and accessories for your home, Philips has been pushing its Hue lights for entertainment purposes more and more. The Zigbee-toting Hue lights can now be used as accent lighting for music, film, and even gaming, which may seem gimmicky or cool, depending on your outlook. I would say it’s a bit of both, or at least that’s how I view the latest addition to the lineup, the Hue Play.

These light bars are specially designed to offer indirect, diffused lighting behind a TV screen or computer monitor, mimicking a Philips Ambilight TV set. Like any Hue color light, Play can produce 16 million different pigments with various presets available to choose from in the app. The highlight feature is the Hue Sync app for your computer, with which Play can mimic the colors that are on the screen in real-time to offer what Philips describes as a more immersive viewing experience. Let's see if it's worth the price of admission. 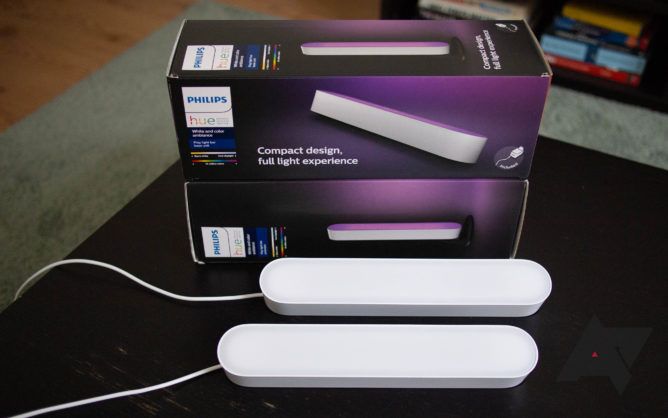 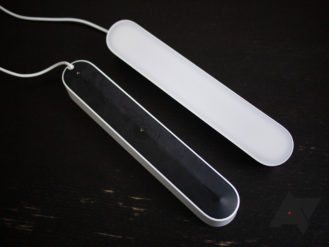 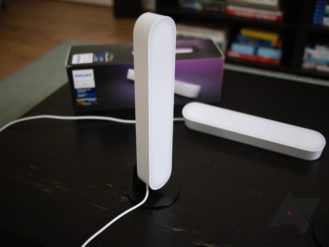 The stadium shaped units are smaller than I expected, fronted by a diffusing panel and coming to a point on the back so they can be angled slightly towards a wall. The rear is finished with soft-touch plastic so as not to cause any damage to surfaces. Overall, the design is thoughtful, except for the power cable that sometimes causes the light to tilt the wrong way. 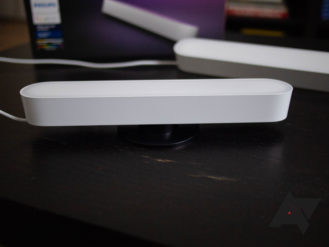 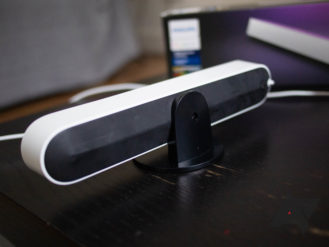 Included attachments allow for vertical or horizontal positioning, facing up or at 90 degrees (i.e. straight towards a wall). There are also 3M adhesive pads so you can affix them to the rear of a TV or monitor to shine backward. 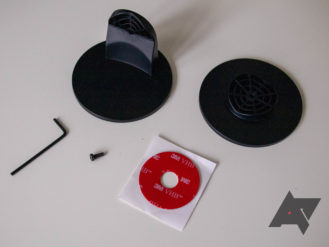 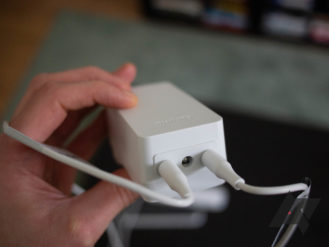 Hue Play comes with a nifty power adapter that has both EU and UK attachments (since I’m in the UK) and three inputs, so you won’t need to use up an extra wall outlet just to add a third light. Although I was supplied with two single packs ($70/£65), there are double packs with one adapter ($130/£120) plus single extension packs with no adapter ($60/£55) so you can save money and produce less waste by picking up only what you need. Black and white options are available for the casing, although the back part and stands are black for both, as you can see from my white models. 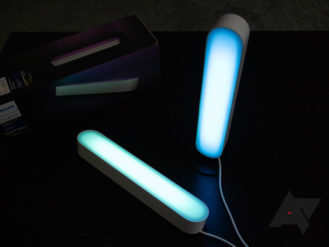 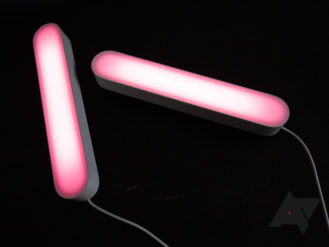 The intention with Hue Play is for them to shine on the wall behind your TV or computer monitor. Since I don’t really use my Mac for gaming or movies, it made more sense for me to install them behind my TV. I tried them in various positions but eventually settled on using them naked, tilted facing the wall. This produced the most consistent halo of light all the way around my 43” TV, but for bigger screen sizes you may need a third light to get the best coverage. For a computer monitor, you'll probably want to adhere them to the rear like so. When you first plug them in they will turn on at full brightness and attempt to blind you, so be warned. 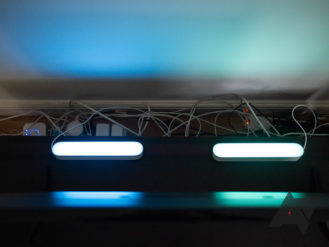 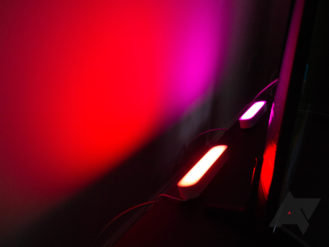 Please ignore my mess of cables.

Once you’ve positioned the Hue Play lights where you’d like them and hooked them up to the power, setting them up in the app is easy. Assuming you've already connected your Hue Bridge (necessary to use all the features), you first need to use Light setup to add each Play unit and rename them if you wish.

I then used Room setup to add them to my living room, and next is where the setup diverges from a normal Hue light. In Entertainment areas, you’re asked to position your lights on a diagram relative to where they are in real life — in my case, behind my TV.

N/B: You need to move the lights past the edge of the screen, further apart than in the screenshot above, for them to display different colors based on different sides of the screen.

This ensures the lights will work correctly when synced with music, video, and games. For that, you’ll need the free Hue Sync desktop app, available for Windows and Mac. I’m using the latter (see below), and apart from a few security permissions needing to be granted, installation was easy enough. Once you’ve connected your Bridge, your Entertainment area should show up and you’re now ready to try the headline feature of the Hue Play lights. 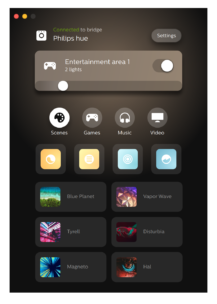 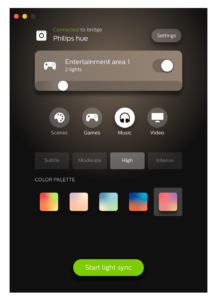 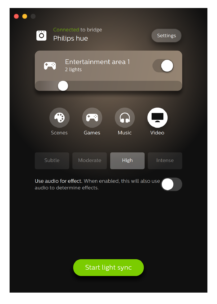 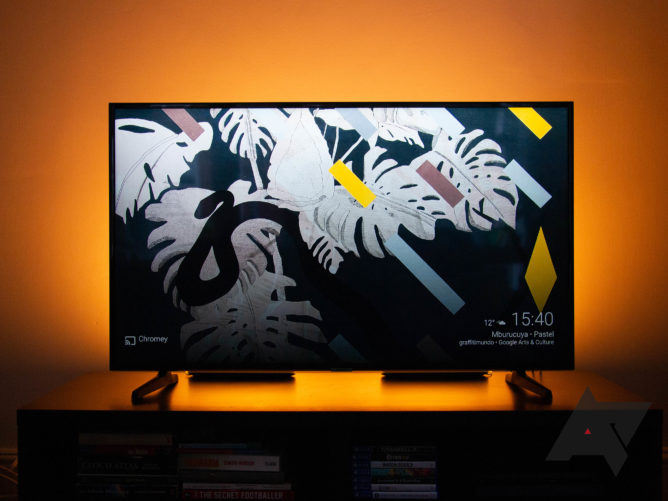 Without the Hue Sync app, the Play is nothing more than a static ambient backlight. It works perfectly well in that respect and produces a satisfying luminous aura wherever you place it. You can also set up routines, timers, and such, just as with any other Hue product. It’s hard to imagine paying this much without using the sync function, though. You can use other Hue color lights in an entertainment setup, but the design of the Play makes it best suited.

Video sync with the audio option turned on.

When you come to use the video or game sync feature, the first thing to note is that it simply uses a screen overlay to decide what’s on the screen and produce similar colors. Even so, there’s very little discernible lag. Using the Play lights behind a TV is problematic, however, even though this is a use case Philips advertises heavily. Syncing to whatever is on my Mac’s screen is pretty much flawless, but getting it all working on a TV is a pain. You can supposedly Chromecast or Miracast but that only works if the video is fullscreen and casting from YouTube and other sites won’t do that. So the only way to really sync Play up with the big screen is to use an HDMI or VGA cable. It’s obviously a little inconvenient unless this is a setup you often use, but there are other functional problems too. Although a setting in Hue Sync is supposed to “Auto detect primary display,” in reality this often fails, meaning you have to restart the app and select one manually.

Video sync with the audio setting off. Notice one of the lights has tilted the wrong way, which often happens when you're messing with cables behind the TV.

Syncing with music is unfortunately also very hit and miss. There were no problems the first couple of times but it has invariably refused to work since. Some suggest possible interference from voice control systems or solutions like turning off all the lights in the Hue mobile app before starting sync, but nothing has helped me with any consistency — it’s something Philips really needs to look into. It's great when it does work, with various color palette options. With a whole room full of different Hue bulbs it could make for great party lighting.

Gaming sync works just the same as with video, and both include a setting that syncs with audio at the same time and different intensity settings so you can choose how dramatic the lighting changes are. If you were to play an action-packed game, you’d want the most intense settings for added atmosphere, for example. Once more, the lack of latency is both surprising and impressive. There are also some promising integrations, including one that allows you to connect Razer Chroma devices such as keyboards to sync up with the LED lighting and a music visualizer called Light DJ.

Disclaimer: this is actually a video of someone playing No Man's Sky since I don't have any impressive looking games on my Mac. Gaming sync works exactly the same as video, though. Maybe. The Hue Play by itself is a great piece of hardware, but the main attraction is Hue Sync, and there’s a way to go for that to truly impress. Native TV or console support is a must for those wanting to easily use Hue Play with a big screen, and bugs like the one that prevents music from syncing need to be ironed out. It may be that with further integrations and enhancements this ends up being a really decent product, but it’s not quite there yet. PC gamers or those who watch movies on a desktop may see more value in it, but you can produce similar results with cheaper light bulbs, albeit with greater effort in mounting and installation. 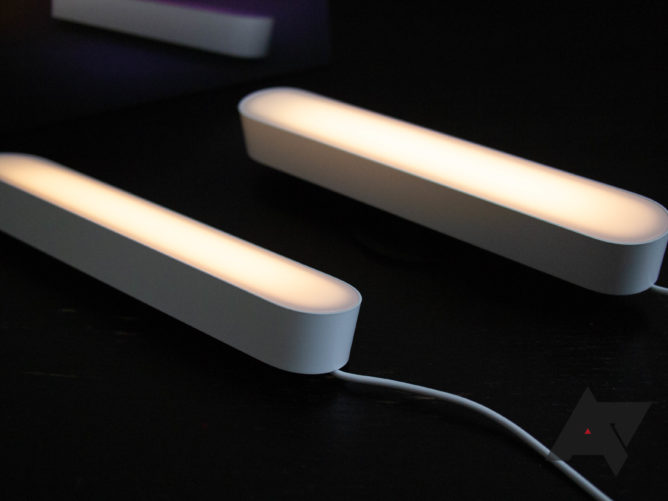 Weekend poll: Are you happy with your phone's battery life?