Google Assistant-powered smart displays all do pretty much the same things, and, except for the Google Home Hub, run identical software on similar internal hardware. That uniformity leaves device-specific critiques to nuances in external hardware, and while LG's ThinQ View display doesn't outright fail in any respect, for $250, its functional similarity to cheaper, prettier devices makes it a bad buy.

The ThinQ View is not a particularly unique or attractive device. It's a rectangular, dark gray box, about the size of a loaf of bread. In its center sits an eight-inch, 720p screen, flanked on either side by a pair of speakers. Smart displays are often compared to the small, counter-top kitchen TVs people used to have, and this really does look like a modern take on that idea. It's hard to say it's ugly, but there's nothing compelling about its design. Whereas the Home Hub is recognizably Google with its soft-touch plastic bezels and fabric-covered base, and the Lenovo model has a unique asymmetrical look (and optional bamboo backing), the ThinQ View is completely unremarkable to look at. It's simple, but not in a way that would fit well into a considered decor. At best, it might go unnoticed, which isn't really a good thing for a piece of hardware expressly made to be looked at.

The volume keys are impossible to find by touch.

Above the screen sits a camera for Duo video calls, with a physical shutter to make it feel less creepy when it's not in use. Up top is a sliding switch to manipulate that shutter, capacitive volume keys, and a button to mute the display's microphones. The volume keys are impossible to find by touch, which makes them sort of useless; if you're looking at the thing, you might as well adjust the volume using on-screen controls. The mute switch is big and tactile, which is nice, even if I don't reach for it often.

The ThinQ View's screen is nice enough, with good viewing angles and adequate brightness for indoor use. When the room is dim, the screen goes dark, showing only a digital clock against a black background. Depending on the combination of brightness of both the environment and the screen, there's sometimes visible light bleed in this darkened state, which is annoying for a device on the pricier end of its category. The dimming is a little aggressive for my taste, too; light in my apartment is warm and dim in the evening, and I often walk past the display expecting to see a photo but getting a clock instead.

Dual 20-watt speakers live to the left and right of the device's screen, and they're the big reason to consider the ThinQ View. Their quality beats out other products in this category, with the exception of maybe the JBL Link View (which, coincidentally, is also the only display I find uglier than this one). They get room-fillingly loud, and they're set far enough apart for noticeable stereo separation. There's better bass response than you'd get out of most smart speakers, too, but at 70 percent volume or higher, things can start to get muddled.

The ThinQ View won't replace your stereo, but it's more than robust enough to pump some tunes or a podcast while you're making dinner.

The View knows all the normal smart display tricks: you can ask it questions, set timers, get step-by-step cooking instructions, use it to control your smart home gadgets — these things can do a lot. A common argument against their existence is that their functionality is limited compared to tablets, which have a similar form factor. While that's true in a way, software purpose-built for use on a stationary, audio-forward device makes for a much more enjoyable experience than trying to use a Fire tablet or iPad Mini for the same tasks. 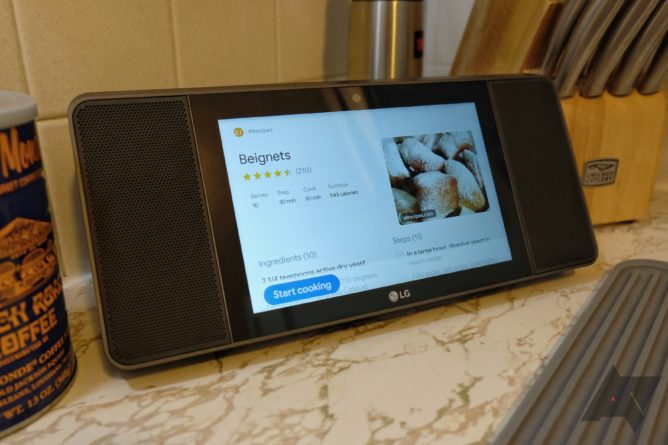 Case in point: like other displays, the ThinQ View can flip through a curated slideshow of your photos while idle. I absolutely love this feature. I've got thousands of pictures saved to Google Photos, most of which I rarely see; in my time with the View, I found myself smiling at the sight of a forgotten photo from a date or a trip to the park with my dogs almost daily. Could you rig a similar slideshow feature on a tablet? Maybe, but it'd take some finagling, and I'd bet dollars to donuts it wouldn't work nearly as smoothly.

I wouldn't. There's nothing objectively bad about the ThinQ View; on the contrary, I actually like it quite a bit. If it were earlier to market, I'd probably recommend it, but the things I enjoy most about it owe to its being a smart display at all rather than any trait specific to this device. The basic feature set is great, and the speakers are about as good as it gets in a product of this kind, but with more affordable and better-looking options available from competitors, the View just doesn't do enough to justify its own existence.

If the ThinQ View's look jibes with your style sensibilities and you've got $250 to drop on an Assistant-equipped screen, you'll find plenty to like here. For my money, though, I'd pick up a Google Home Hub (which costs $100 less, when it's not on sale) and direct its music output to external speakers. If you're in it for Duo calling, you can get the same size display in a much prettier package from Lenovo for 50 bucks less. 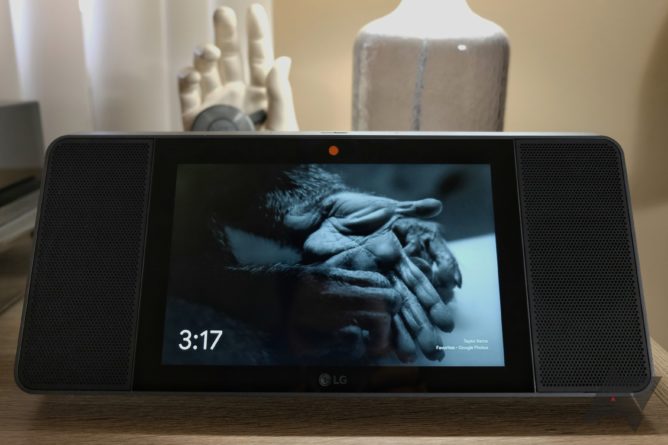