We've been nothing if not critical of Android's slow and wildly inconsistent share interface, and Google has promised that fixing it is "a priority." In what is likely to be related, updated versions of the UI have started rolling out to a handful of apps in the last month, and the latest to see a taste of something new is Google Photos. Calm your excitement, though, as it's still in limited testing.

The new interface, first spotted by 9to5, bears a resemblance to the one in Google News and the updated interface that hit Maps last month — which, sadly, slipped under our radar.

Gone is the old boring grid list of contacts and apps, replaced by a much smaller side-scrolling linear list for each. They're still grouped in two separate sections, but they consume much less vertical space, and panning down for more apps to target is no longer required. Furthermore, by scrolling to the side, you won't end up with items in the list moving just before you tap as they load — literally the worst thing about Android's sharing interface.

That extra vertical space also makes the previews in the sharing carousel that much bigger. Other than that, contact searching is still present, the first two items in the app list are still "Create link" and "Shared album," and the three-dot menu (which previously just pointed at a technical explanation for the recommended people on the list) is in the same spot. 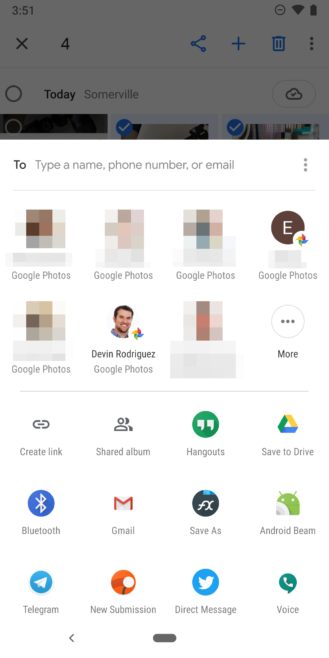 Old (left) and new (right) share menu in other locations in Google Photos.

We should also note, there's actually more than one sharing interface used by Photos depending on where you are in the app (photo preview vs. no photo preview) and the changes apply to those other locations as well. However, for some reason, Google didn't tweak the height of the menu to be smaller in the non-preview carousel version, so there's a big block of empty white space at the bottom of your screen.

At the time of writing, none of my devices has the updated interface, though at least one of us here at AP has it on their OnePlus 6T, and we've received reports from our readers of it landing. We presume it's a server-side test, so YMMV when it comes to your own phone.

Google hardware year in review: What worked, what didn't, and what we want in 2019