Chromebooks are popular among consumers, but they're huge in education. Asus has just rolled out a new family of education-focused Chromebooks, which it says are both lightweight and ruggedized. If something does break, the Asus Education series laptops are easy to open up and repair. That's important for anything you're going to give to kids. 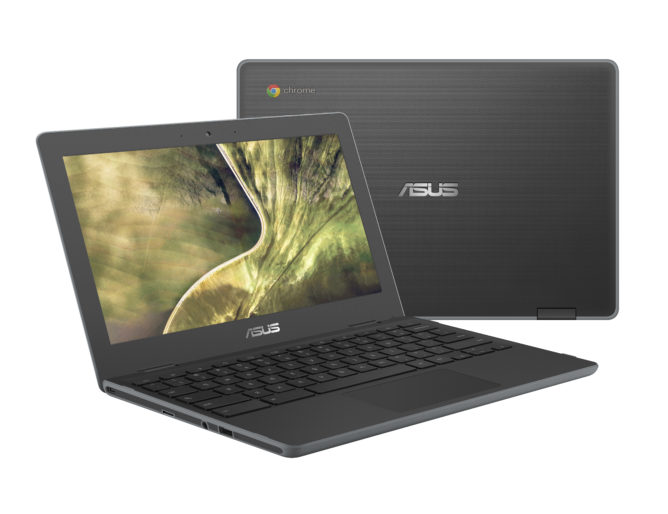 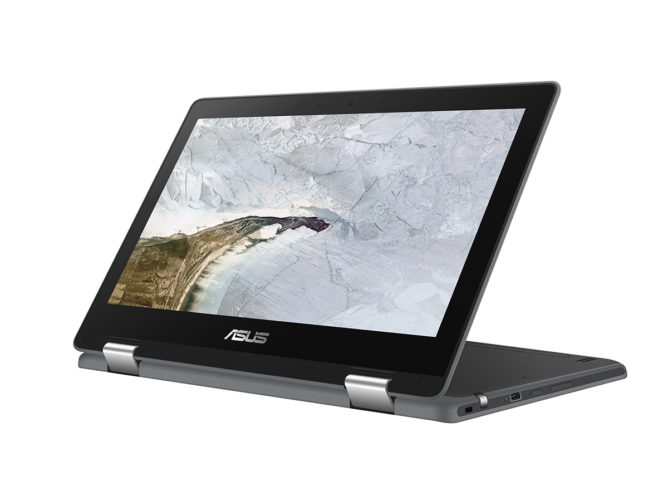 For schools that want something more flexible, there's the Flip C214 convertible Chromebook. It packs a Celeron N4000 or N4100 processor, 4GB of RAM, and 32GB of storage. Again, you have a USB-A and dual USB-C ports. The 360-degree hinge lets you adjust the 11.6-inch HD LCD for tablet or stand mode. If you don't need the keyboard at all, Asus has announced its first Chrome OS tablet with the CT100. It has a 9.7-inch 2048 x 1536 display, a hexa-core OP1 ARM processor, 4GB of RAM, and 32GB of storage. It has a single USB Type-C port for charging. 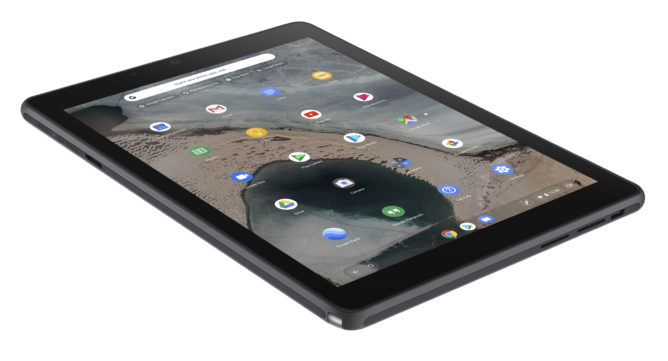 All these devices support Android apps and Google G Suite for Education. Asus says pricing and configuration details will be released when the devices launch in the coming months.

LAS VEGAS--(BUSINESS WIRE)--Today marks the debut of the ASUS Chromebook Education series that provides lightweight, ruggedized Chrome OS computer solutions for educational use, and continues the ASUS commitment of providing an extensive range of innovative products and services for the education sector.

The ASUS Chromebook Tablet CT100 is designed to serve as an easy and familiar introduction to technology for much younger kids. This rugged tablet has the same version of Chrome OS that is available on the notebooks and Chromebox desktops they’ll encounter later on, but it’s fitted into a recognizable form factor that’s reinforced to withstand life in the hands of children. The rubberized chassis measures less than 10 mm thick, which means it’s easier for small hands to hang onto and less likely to take a tumble as a result. And if it does end up in freefall, it’s rated for drops up to 100cm; the height of most tables and desks.

The 9.7-inch QXGA display is covered in a strong tempered glass to help it stay protected against scratches and gouges while it travels to and from school. The stylus slides into a little garage in the tablet’s frame for safekeeping, when it’s not being used for art, tracing letters, or practicing numbers. Inside this slim slate is a Hexa-core OP1 processor, made especially for Chromebooks. That works alongside 4GB of RAM to keep performance smooth as students skip between Chrome windows and Android apps. School work can be stored on the 32GB of onboard storage, which is ample room for files as well as fun games. The Chromebook Tablet CT100 has a 35Wh lithium-polymer battery, enough for a full school day, and it charges via the same standard USB Type-C™ (USB-C™) connection that’s found on most smartphones.

The ASUS Chromebook C204 strikes a subtler tone, with its dark grey finish, than its predecessor, the blue-and-white ASUS Chromebook C202. In addition, the chassis is thinner, making it even easier to carry around. Despite a thinner body, the ASUS Chromebook 204 is just as tough as the C202. The rubberized chassis is reinforced with thick bumpers on each corner to absorb shock, and the keyboard is tamper-resistant, preventing the keys from being pried out. It can survive falls up to 120cm when dropped flat, and up to 80cm when dropped on its sides. A raised rubber rail on the bottom of the laptop makes it even easier to hang onto, so it’s less likely to be dropped in the first place.

The 11.6-inch HD display features an anti-glare coating is attached to the base via a 180° hinge that allows the laptop to lie completely flat. Its hinge has been tested for 50,000 open and close cycles, so it won’t loosen over time. Its wider range of motion makes it easier for kids to share the screen during group work and allows for a bigger range of positions for the display when parents or teachers are doing over-the-shoulder checks on their students’ work. The keyboard is the primary source of input and features a deep 1.5mm of key travel, which is more than most laptops. The deeper travel allows for fewer errors than shallower keys where it’s easier to accidentally press the keys. A touch screen variant further expands the functionality of the display and allows for more interactive lessons.

Under the hood, there is a dual-core Celeron® processor from Intel®, as well as 4GB of RAM. That’s plenty of power for all of the Chrome tabs kids forget to close and ensure smooth switching when multitasking across Android apps and Chrome extensions. There's 32GB of onboard storage for studying materials offline, though most students will spend their time in the cloud, working through G Suite for Education, Google’s suite of cloud-based education apps, such as Google Classroom, Google Docs, Google Drive, and Google Slides. A USB Type-A port makes it easy to connect external storage or plug in a mouse, and there are two reversible USB Type-C ports for newer peripherals or hooking up to monitors in at home, in at the computer lab, or in the library. The microSD card makes it easy to transfer photos from a camera to the cloud, and the audio combo jack lets students plug in to listen to virtual lessons or make video calls using the HD webcam.

ASUS Chromebook C204 has been upgraded to a 50Wh battery; enough to last all day long. And to make sure there are no dropped connections, dual-band Wi-Fi (802.11ac) allows for connections on the 2.4GHz band as well as the less crowded 5GHz frequency.

The durability of ASUS Chromebook C204 makes it a perfect fit for the classroom, where shared devices see more wear and tear than the average laptop. But accidents happen, and in the off chance the device is damaged, it’s been engineered for easy repair. It features an even more modular design than before, making repairs even easier. The mainboard can be accessed in three steps, and a service door has been added to make the ribbon cables easier to reach.

Schools often have to choose between laptops or tablets when deploying a fleet of devices for a full class, and there are trade-offs associated with both. Laptops are what most students will go on to use in high school and college, but tablets offer access to interactive touch-based lessons, more natural problem solving in subjects like math, as well as the ability to take notes and practice penmanship or travel outside of the classroom to take notes and conduct experiments. The ASUS Chromebook Flip C214 has a convertible design that effortlessly transforms between a tablet and a laptop — or anything in between — based on student’s needs.

The C214 has the same rugged exterior, spill-proof keyboard, and dark grey color scheme. The hardware includes a N4000 and optional N4100 Celeron processor, 4GB of RAM, and 32GB of storage complemented by expansion via MicroSD or USB Type-A. Students can connect to external displays or charge up via either of the two USB Type-C ports, and a stable and reliable internet connection is facilitated by the dual-band 802.11ac.

The C214 has a 11.6” HD display with an anti-glare coating (available on certain configurations) and is anchored by a durable 360° hinge that allows it to seamlessly switch between laptop and tablet mode depending on the type of lesson. An optional stylus slots into a garage on the side, which means teachers don’t have to dish out styluses for lessons and collect them at the end of class so they can be stashed in a drawer for safe keeping. We’ve also adjusted the placement of the world-view camera based on feedback from C213 users. The new location in the bottom right corner of the palm rest is better suited for video calls and recording when the laptop is in tablet mode. In its old location above the keyboard, it was easily obscured when the computer was turned on its side and help up in portrait. Now kids can grip both sides of the laptop, in portrait or landscape, and not worry about blocking the view.

The C214 is reinforced to minimize damage, but in the event that there is an accident, the C214 is easy to repair. With just a few tools, it is easy to replace the battery, the motherboard, the keyboard, or even the thermal module. Getting inside the laptop takes just a few minutes, which means broken parts can be replaced without taking a computer out of commission for more than a morning.

The ASUS Chromebook C403 utilizes the same ruggedized design as the C204, but places it in a larger form factor. Its 14” HD display provides ample workspace for longer and more complicated projects. It has a matte coating to minimize distracting reflections from overhead lights, and a 180° hinge that allows for more freedom of motion and different work positions.

In addition to being bigger, the C403 is also the most powerful. It can be equipped with up to a dual-core CPU from Intel, and features 4GB of RAM. While most students will access and use G Suite, Google’s suite of cloud productivity apps, including Google Classroom, Google Docs and Google Slides, and store their work in the cloud – backed up to Google Drive for safe keeping - there's 32GB of onboard storage for working on assignments offline.

In addition to enlarging the screen, the travel distance on the keyboard has also been increased. The ASUS Chromebook C403 keyboard features 2mm of travel to ensure long study sessions aren’t made any more painful by a shallow keyboard. And, thanks to its increased size, the C403 can squeeze in an additional USB Type-A port, so students don't have to unplug their mouse to plug in a USB drive when taking that assignment to the printer.

There are also two USB Type-C ports with support for outputting to external displays. Both ports are also capable of charging the laptop, and the C403 is rated for up to 11 hours on a single charge. Rounding out the collection of I/O ports is an audio combo jack for when students want to buckle down and do some work while listening to music, or need to watch video presentations for school. Headphones aren’t required for great sound, though; extra room in the chassis allowed for more powerful speakers. The included stereo speakers feature extra-large chambers that pump out volume up to 80dB.

In keeping with other newly introduced ASUS Chromebooks, the C403 is ruggedized, and made for rough handling. The durability includes reinforced corners and a rubberized exterior to protect it from bumps and falls. The spill-resistant keyboard adds extra protection, and the hinge allows for a full 180 degree range of motion. Similarly, the C403 also is also easily repairable, and allows IT professionals to get inside the chassis and replace components in just a few steps.

The C403 is the largest of the new ASUS Chromebooks, but even with the ruggedized chassis, it’s only 13.5” wide and just over 9” deep; no bigger than a textbook, and easily fits into any bag or backpack.

Opinion: Chrome OS is buggier and more poorly designed than ever