While it wasn't pointed out to us until a couple of weeks ago, apparently smartphone non-maker Saygus published a blog post back in November of 2018, begging investors for cash. It's exactly the sort of desperation we'd expect of a company that announced a smartphone three years ago then never shipped it to anyone. And yet, Saygus came back again, and again, and again with excuses, telling would-be customers that their phone was only getting better, just a little delayed, and would be out shortly. It never launched.

The blog post on the company's website, presumably authored by Saygus founder and CEO Chad Sayers, says that the Saygus phone's launch is still "anticipated," which is probably the vaguest promise issued yet about whether or not the phone will actually ship. Even Indiegogo backers screwed out of hundreds of dollars for a phone they never received have largely given up - comments on the campaign page are a ghost town. When people on the internet who have had money taken from them are throwing in the towel, you know the situation is dire.

Given all that, why even post about Saygus rattling its digital cup? As a warning, plain and simple. Saygus has been "a thing" since 2006, allegedly, with the company claiming it created the first phone capable of completing a cellular video call. In 2009, it actually created a smartphone prototype, which like the V2 or Vee Squared or whatever the hell you want to call it, never actually went on sale. There's a solid decade of history here that should make it clear Saygus isn't a reputable company, at least not anymore (if it ever was).

No doubt, history has shown that Sayers is persistent, and he will likely wait until his most recent failure is a distant memory in the technology press before announcing a new, far better phone - or whatever he cooks up - and the press releases hit the inboxes of every major tech publication. Say what you will about their inability to get products to market, but Saygus and Sayers have proven surprisingly adept at convincing the tech media that the Saygus phone is not a fraud, merely the victim of an industry rife with regulatory hurdles and big players hell-bent on keeping the little guy down. But that narrative has clearly worn thin, through, and out the other side. 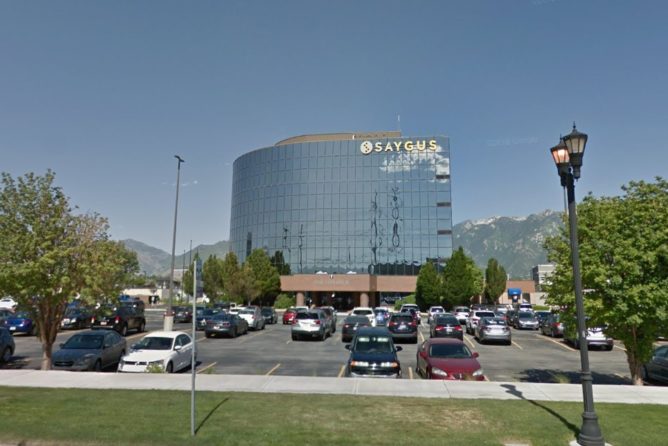 So, is Saygus some big con, a scheme concocted as a way to live off a slow drip of cash from investors and crowdfunders with no intention of ever actually releasing a product? If it is, Saygus has gone out of its way to make it appear the company does actually intend to build a phone. Its prototypes - which I've personally used - are functional, if totally unremarkable. Saygus even rented out part of an office complex in Utah and erected a giant Saygus logo on the building. These aren't the actions of someone looking to scam a few gullible consumers out of crowdfunding cash. Saygus is playing the long game here, looking for big investors, and the company has a skin-deep legitimacy to offer them - prototypes aren't nothing, and that building sure looks the part.

But after years of obvious failures, constant mocking in the press, and inexplicable months of total radio silence, you'd have to be crazy to give these guys money. And maybe "crazy" sums up all that Saygus really is at this point: the delusion of someone who managed to get far enough to believe their own nonsense. Perhaps Saygus started out as a get-rich-quick scheme, but something tells me it became a validation of one man's belief that, if only he had the money, he could show up the big guys.

I'm sure there's far more to this story than we'll ever know, and I hope one day we can at least hear part of it told by someone who lived it.

After family tragedy, small but unique case manufacturer Cruzerlite is back in business