While 5G has massive potential, the only major effect it has achieved so far in the US is confusing the general public. That's due in large part to ill-advised marketing strategies and questionable 5G "launches" by the four major wireless carriers. In the latest addition to this frustrating saga, we're finally seeing speed tests of AT&T's fledgling 5G network, and the results are far from impressive. 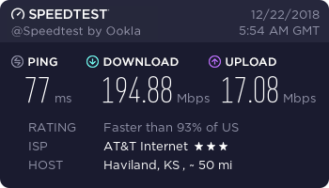 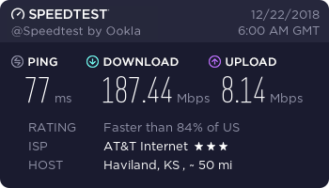 Well, there is an explanation, albeit not an entirely satisfying one. AT&T's 5G network (which right now can only be accessed via a Netgear Nighthawk 5G hotspot) is in its infancy, and while it's a bit more efficient than LTE when used in the same channels and with the same channel sizes as LTE, its top speeds are largely dependent on broad channels of spectrum, particularly millimeter wave spectrum. Eventually, carriers will deploy more, but for now, AT&T is using 100MHz of millimeter wave spectrum with 2x2 MIMO antennas, which makes for a maximum of 625 Mbps speeds on pure 5G (though the carrier has also thrown out a 979Mbps number for its peak 5G speed). Both of those speeds are lower than LTE's peak, which is 1.2Gbps in ideal conditions. So the explanation is ultimately - AT&T's 5G just isn't fully developed yet.

But there is promise. As mentioned above, 5G's real strengths lie in providing larger channels of spectrum more often than LTE. As PCMag's Segan points out in a December explainer, one large point of potential for AT&T's 5G, and all 5G, is offering a higher floor than LTE - the speeds may not be shockingly high, but hopefully they will turn up much more consistently high results. Take a look at Segan's piece for a more in-depth explanation.

Still, the 5G hype machine has promised a whole lot more than marginally better performance, higher floors, and slightly lower latencies, so it's fair to be somewhat perturbed by these early results which, it's worth pointing out, are the only reports we've seen so far, due to AT&T's refusal to hand out review units. Plus, there's the whole 5G E mess.

As anyone might have expected, carriers are so tangled up in beating each other to 5G milestones, the whole thing has become (at least temporarily) a farce. It's too bad really, because there is some really cool engineering at work. Over time, we'll see all the impressive things 5G has in store, but there's no getting around the fact that we'll have to wade through a lot of unpleasantness to get there.

Amazon Fire TV Cube is $60 (half off) on Woot, today only