ExaGear's current price of $29.99 doesn't seem unreasonable to me, especially considering its the only Windows emulator on the Play Store with anything close to decent performance (CrossOver aside, which only works on x86 devices). ExaGear does exactly what it claims to do, but there is a lot of missing functionality, and playing PC games on a smartphone screen isn't exactly enjoyable.

The interface of ExaGear is pretty bare-bones. The side menu includes shortcuts for the Desktop, the Start Menu, installing a new app, and managing virtual containers. Like a few other front-ends for Wine, ExaGear splits each app into its own virtual Windows installation, but it still merges all the Start Menu items into one easy to access screen. 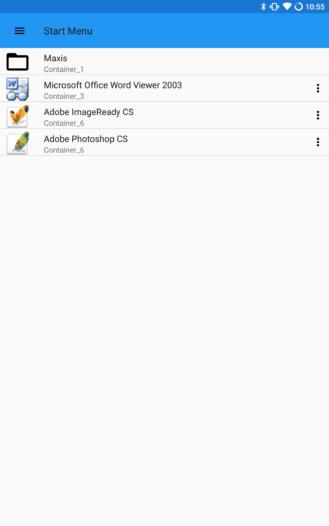 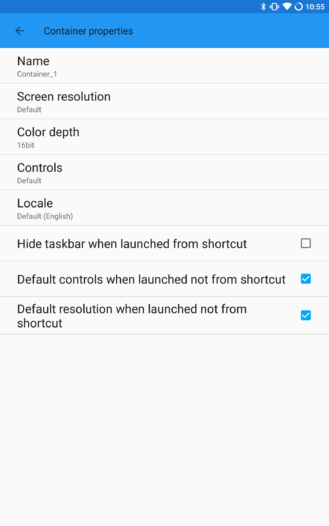 If you're familiar with Wine, you can change various settings from the Containers Manager. Here you can open the File Explorer, install additional packages (fonts, .NET, etc.), or change display options. However, there are still some missing options that can impact compatibility — more on that later.

To actually install a Windows application, you have two options: select one from a predefined list, or select an .exe file from your Downloads folder. The list of officially-supported games and applications is very short — I counted 25 as of when this review was written. This is my biggest problem with ExaGear, since other Wine front-ends (like CrossOver, WineBottler, and PlayOnLinux) usually have hundreds of supported applications. Most of the options are older games, like Civilization III, StarCraft, and Fallout 2. 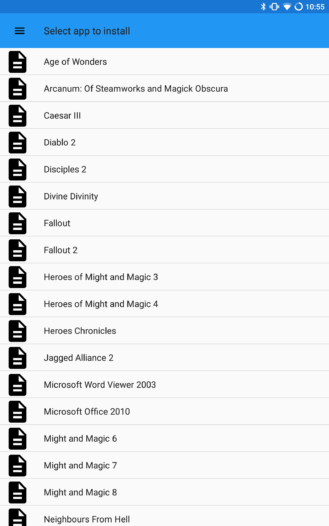 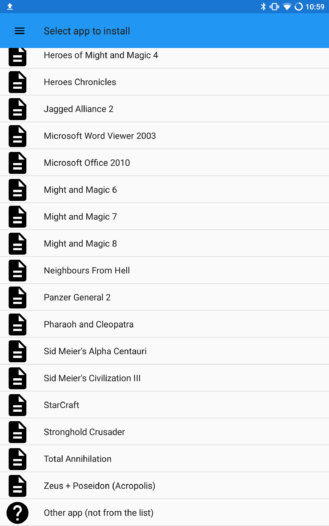 The Wine compatibility layer is an incredibly powerful tool, but almost every program needs at least a few minor tweaks to get working. Usually, this means installing some frameworks (like .NET) and a font or two. In extreme cases, more hacks are required — like changing the Windows version, installing certain Windows components (like Internet Explorer), and more. ExaGear only has four optional packages to help with compatibility — Core Fonts, the Tahoma Font, .NET 2.0, and MS Jet 4.0.

If your game or application isn't on the official list, there's a good chance it won't work at all, even if you put the work in of figuring out which packages are needed. There's also no way to change the Windows version or override DLLs, since the main Wine control panel is missing. Finally, there is no option to mount an ISO as the D:\ drive, so I was unable to install many of the disc-based Windows games I have backed up over the years

So in summary, if you want to install something outside of the extremely limited library of supported applications, expect to be fighting an uphill battle.

I tried ExaGear with a handful of Windows applications and games, and in my experience, it has about the same level of compatibility as Wine on the desktop. I tried Microsoft Word Viewer 2003 first (downloaded from here), since it was on the list of supported applications, and it worked just fine. 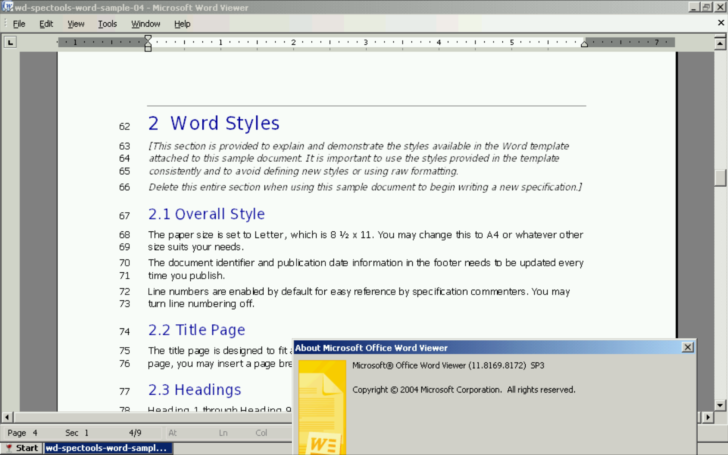 Fallout 1 is also supported, but the installer wouldn't open. In fairness, I was trying a backup of the original Windows install disc, not the GOG version that ExaGear recommends.

Next, I tried Firefox, which also failed to install. Then I gave Photoshop CS (from 2003) a shot, which did successfully install, but it was incredibly slow on my 2014 Samsung Galaxy Tab S. This is where the limitations of the x86 emulator start to come into play, but if you have a more recent flagship phone/tablet, you might see better results. 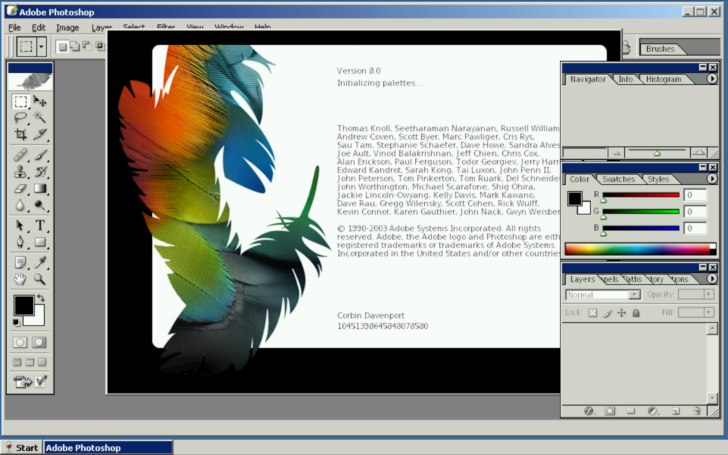 Finally, I installed Sim City 2000, which almost worked — except the sidebar vanished when I clicked anywhere on the map. So close! 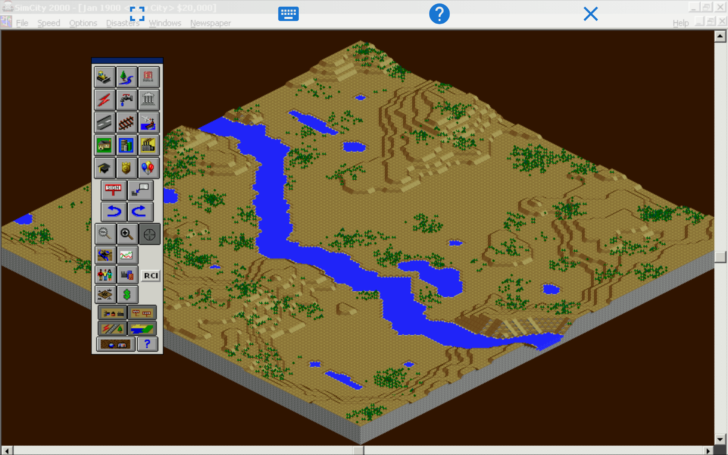 Probably not. ExaGear is definitely impressive from a technical standpoint. It's the only Wine port for Android that can run standard x86 Windows software on ARM devices. CrossOver for Android is a much better product, but it only works on x86 Android devices and Chromebooks. Wine itself is now available for Android, but there's no built-in emulator, so ARM devices can only run Windows software compiled for ARM. 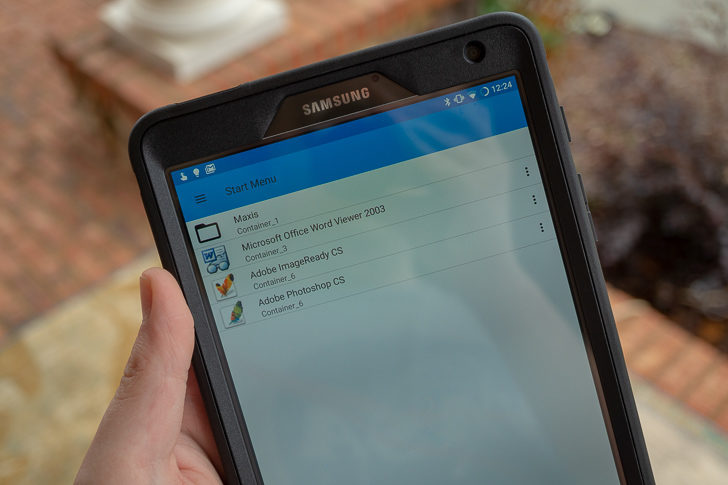 Technical achievements aside, I don't really see why anyone would buy this, unless you have a large Android tablet with a keyboard (or if you're still rocking an HP Slatebook 14). Windows applications are impossible to use on phone-sized screens, and even when you move up to a tablet, you still have to deal with spotty Wine compatibility.

If ExaGear can add more applications and games to the supported list, the $29.99 price tag could be more easily justified. As it stands, the app is more of a technical demo than something I would want to use on a regular basis. 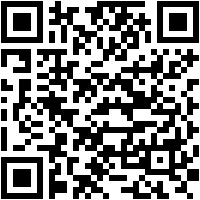